While the top teams in the Atlantic and Northeast build impressive leads, the Southeast Division title remains a dogfight. The Jets and Canes are battling for every point, while the Capitals continue their push to sneak in to the playoff mix.

Fans of the Winnipeg Jets are getting there first taste of a playoff race in a generation and their ride this week was a wild one. They opened the week Sunday defeating a coach-less Tampa Bay Lightning squad. They followed that up with a dominating 4-1 win Tuesday in Raleigh over their biggest challenger in the Southeast, the Hurricanes. From there they went to Pittsburgh, where the Penguins ate them for breakfast in the 4-0 shutout. Back at home Saturday, they had the chance to put another nail in the coffin of the reeling Canes. Instead, the Jets went down to defeat, losing 3-1 in the matinee.

That 2-and-2 record for the week was good enough to keep them at the top of the division, and third in the Eastern Conference. Many still believe that only one team from the Southeast will be playing in the post-season, adding to implications of gaining the top spot.

Ondrej Pavelec continues to be the backbone, and he started all the divisional match-ups this week, while Al Montoya was thrown into the lion's den in Pittsburgh Thursday. Defensively, the talented puck-moving Tobias Enstrom returned this week from a shoulder issue, and picked up a goal in each of his first two games back. Unfortunately, Noel has now lost the services of Alternate CaptainMark Stuart from his D-Corps who was out all week with an undisclosed injury. Of equal concern is the inconsistent play of Dustin Byfuglien, who this team needs at his best if they are going to continue to keep their grip on the division lead.

Big Buff continues to come up short - Winnipeg Free Press He looks tired right now. That’s not an adjective a hockey player wants attached to his game. It doesn’t offer much promise for success.

Offensively, Evander Kane got off the schneid in Carolina Tuesday, contributing on all four of his team's goals. Two-time Stanley Cup winner and team captain Andrew Ladd, who had not had back-to-back games without at least a point this season, is now pointless in three straight, including both the games vs the team that drafted him 4th overall in 2004, the Hurricanes. Just like Byfuglien, Ladd is a key component to the Jets success as the pressure of must-win games continues down the stretch.

The Jets have completed 36 games, more than any other contenders in the Southeast, and they play another 4 games this week, all outside the Division. By next weekend, they'll have only eight games left (six of which are at MTS Centre) to finish the remaining three weeks of the regular season. The atmosphere and the crowd dynamics at MTS will be certainly be as much the story as what happens on the ice.

The Hurricanes found a way to win at last. The team that had been leading the way in the Southeast for weeks, put an end to a dismal March by defeating the Winnipeg Jets Saturday afternoon, ending a gut-wrenching seven-game winless streak that had dropped them to the bottom third in the Eastern Conference standings. It was again the dynamic duo of Eric Staal and Alexander Semin leading the charge.

Semin's name was trending worldwide Monday night when the Canes usually conservative GM Jim Rutherford announced that he had extending the Siberian Sorcerer to a five-year, $35 Million contract. Hurricanes fans seemed to approve [poll], while others around the league urged caution about the 29-year-old's history of inconsistency and poor effort. Semin responded to the new deal by being the game-changer for his new club in both games in Toronto and Winnipeg this week, with gutsy performances and 4 points. He also did this:

( Click on image to open and animate. Via 24.media.tumblr.com)

The day after Semin's contract was announced, the Hurricanes shocked many when fan favorite Jussi Jokinen, a hero from the 2009 playoff run, was put on waivers. He cleared and returned to Kirk Muller's line-up in Winnipeg yesterday, where his first period powerplay goal held up as the game winner.

On the injury front, which has been a significant part of the Canes ups and downs the last month, top-six forward Tuomo Ruutu left the game early Saturday (after picking up 2 assists in less than 4 minutes TOI) with an undisclosed lower body injury. This was after only just returning a week earlier from a lengthy re-hab from hip surgery in December.

On the blueline, Justin Faulk's absence (due to a 2nd degree MCL sprain) was conspicuous all week, as Jamie McBain became the target of fan venom after a couple of shakey performances when over-matched. Faulk may be back as early as Tuesday. Rookie defenseman Bobby Sanguinetti is also out with a shoulder injury.

Finally, in goal, Dan Ellis' lacerated knee kept him in the pressbox and put the pressure on Justin Peters to carry the load, with mixed results. Ellis should return to action in one of the back-to-backs Monday or Tuesday for Muller. Cam Ward (3rd degree MCL) is still a few weeks away.

The Hurricanes now sit 4 points back of the Jets, and have three games in hand. Which mean nothing if they don't win those three. They have the heaviest schedule of any team in the East these last four weeks of the season, playing 15 games in 26 days. This week they're in Montreal, a good measure of their competitiveness against the challenging Canadiens, before returning home to host the Capitals, Lightning and Rangers in a three-game homestand

The Capitals continue to believe they have a chance to make the playoffs and why not? Even better news? Alex Ovechkin is leading the way. A month ago, both those statements would have sounded highly improbable. The recognition is widespread as Ovechkin was named one of the NHL's Three Stars of the week on Monday.

The Caps played three very close games this week, winning two in shootouts, and losing the other 3-2 to the Islanders at Verizon Tuesday. That's good enough to put them just 2 points behind the 8th place New York Rangers, who are hardly playing well enough to be a lock for the post-season themselves.

With the trade deadline April 3rd, GM George McPhee's decision to be a buyer or seller is no clearer than it was a week ago. The Caps have two games before Wednesday, including a tilt versus a floundering Flyers club in Philadelphia (a team that beat the Bruins in Boston yesterday, go figure) tonight and then they're in Raleigh Tuesday. Stay tuned - and don't count this team out yet.

Also on McPhee's plate is deciding what to do with Mike Ribeiro. Mike Ribiero contract: Caps forward wants long-term deal in Washington - SBNation.com With 10 goals and 24 points this season, Ribeiro leads the Capitals in points and is tied for the team lead in assists. After a few rough seasons in Dallas, Ribeiro's playing style has transferred wonderfully to the East Coast and it's apparent he'd more than like to remain there after this season.

A week ago we learned that Guy Boucher's tenure in Tampa was done. Tuesday, Jon Cooper was named the new coach, as Steve Yzerman stayed within the franchise by naming the man who led last year's Calder Cup winning AHL affiliate, to take over the job. Cooper made his debut behind the bench Friday and his new roster rewarded him with a thrilling come-from-behind shoot-out win over Martin Brodeur and the New Jersey Devils.

Leading the way, Steven Stamkos had a 3-point night Friday, adding 6 points on the week as he builds on his cushion to repeat for the Rocket Richard Trophy, with 25 goals in 34 games played, four goals ahead of the Islanders' John Tavares. Stamkos' 46 points is good enough for second for scoring in the league, behind Sidney Crosby (who has a 56).

The biggest question about Tampa (at least if you read the national press) seems to be whether Anders Lindback is ready to be the team's number one in goal. Rumors that the Sabres' Ryan Miller might be headed to Tampa ran wild this week, but at this point, they are nothing more than speculation, and really, mostly coming from outside the Sunshine state.

With the trade deadline coming up, the Martin St. Louis trade rumors were also squashed by Yzerman himself, further taking the fun out of it for those outside Florida looking to feast on the club's miseries.

Two stories stand out of Sunrise this week as Ed Jovanovski will have season ending surgery this week, and some even speculate this may be the end of the 36 year old's NHL career.

At the other end of his career, 19 year old Jonathan Huberdeau is continuing to generate scoring chances and great press. The rookie seems poised to become for the Panthers what John Tavares is for the Islanders, establishing a new level of offensive prowess without yet having the support of top-tier teammates that Stamkos and Crosby have had.

Huberdeau may well get some help from this year's draft as the Panthers now have a 72% chance of finishing 30th in the standings.

Why Huberdeau stands out among NHL rookies - The Globe and Mail What impresses Dineen and others on the Panthers is the way Huberdeau conducts himself both on and off the ice. The native of Saint-Jérôme, Que., could have come to the team with hubris rather than humility, since he was the MVP at the 2011 Memorial Cup shortly before going third overall in the NHL entry draft.

Meanwhile, the Panthers are enjoying the role of spoiler and, as the Bolts did Friday night, Florida came from behind last night to defeat the New Jersey Devils in overtime, on Dmitry Kulikov's game winner in the extra frame. Huberdeau had 2 helpers in the match, adding to his team-leading 25 points. With all the injuries to the Cat's forward lines, Shawn Matthias really stepped up his play this week, notching five goals in three games.

The Panther's play only twice this week, taking on the Lightning and Capitals.

The Hurricanes would have been in very sorry shape without that win over the Jets yesterday, and both those teams have tough road ahead of them to remain in contention.

The Lightning are surely moving in the right direction, and could pull it out with something like a 10-3-1 record in what's left of the season. Same for the Capitals, who would need to go 9-4-1 to make the cutoff projected at 52 points. For all these evolving charts and projections, please be sure to bookmark SportsClubStats.com to track the impact of every win and loss. Unlike teams leading the way in the Atlantic and Northeast Divisions, no team in the Southeast can claim to control their own destiny. 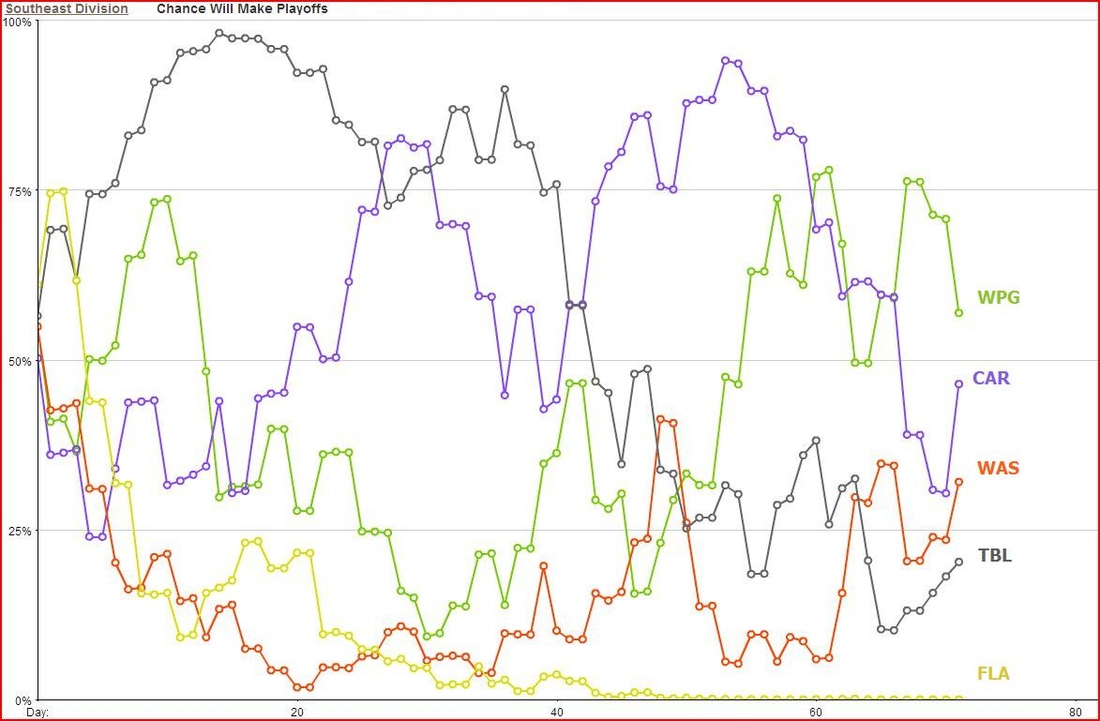