Written off in February, the Capitals seem poised to return to the playoffs as Southeast Division Champions. Winnipeg's chances are dwindling, but still alive. For the other three clubs and their fans, this is most certainly not the hockey season they were looking for.

Broken record time in the Southeast Division this week.

There's no shortage of stories, analysis and chatter about the resurgent Washington Capitals and the return of Alex Ovechkin. No need for me to add to the pile (and needless to say, I have no desire to do so).

Similarly, with two weeks left in the regular season and the impending dismantling of the Southeast Division, I find I have a hard time continuing to embrace the Winnipeg Jets as one among us. Pretty sure the Manitoba fans reciprocate that sentiment.

That leaves the Hurricanes, Lightning and Panthers. all of whom have arrived at that point in the season where the only thing left to look forward to might be the draft lottery April 29th. This while they attempt to avoid thoughts of what might of been, promise unfufilled yada, yada, yada. The focus shifts to planning for next year with the new divisional alignment, and what may be most important to us fans for the remaining stretch of hockey games, competing and playing for pride.

We've seen one coach firing, but so far nothing more among those teams. There's been no quotes of teammates throwing each other under the bus like we've seen in Buffalo and Colorado (nor snoozing goaltender controversies). What is ahead this summer - as Steve Yzerman, Dale Tallon and Jim Rutherford roll up their sleeves - what is to be done?

In the Southeast, the weather has been beautiful, moving in the opposite direction of those graphs I've been linking from SportsClubStats. Many of us have resigned ourselves, however reluctantly, to a long summer as a bystander to the Stanley Cup playoffs. Unfortunately, we have had a lot of practice at managing expectations and taking the long view as a survival strategy.

The Lightning are in Buffalo today after a thrilling comeback at home against the Washington Capitals last night (which ended abruptly with Mike Green's OT winner).

Tampa Bay and the Hurricanes are each headed up to Winnipeg this week, with a chance to impact the Southeast standings as spoilers - sigh - and see mid-April highs around 34F with snow flurries and 20 mph winds. Plus, they have that tiny AHL arena with their eyeroller chants.

Florida heads up to the New York metro area to play all three clubs, where their opponents will likely be the only team whose story will get any attention in each game.

Washington is touring Eastern Canada in the week ahead - some of the toughest competition they've seen in a while, in Toronto, Ottawa and Montreal. They are an admittedly impressive 8-1-1 in their last 10. Ovechkin is now the leagues's leading goalscorer. Will they be able to sustain this pace in more hostile environs?

So, yeah. Are we there yet?

Winnipeg is hanging around and those games against the Lightning and Hurricanes loom large for Jets fans. 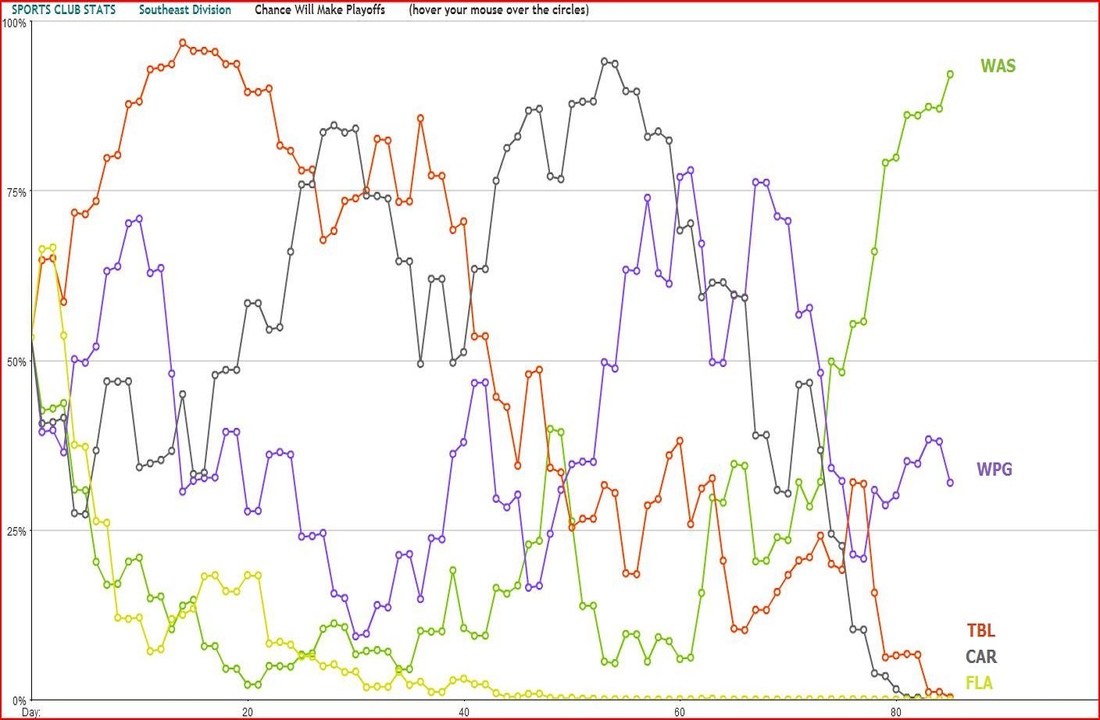 There is another sort of tracking at SportsClubStats to keep an eye on for those ready to think long term. Head here to see how the Bolts, Canes and Cats are looking to nab a game-changing draft pick. No graphs, but respectively they would be looking at 7th, 4th and 1st in line, if the lottery were held today.

Tampa fans know what it means to get a Vincent Lecavalier, Steven Stamkos or a Victor Hedman. The Panthers have Jonathan Huberdeau and Erik Gudbranson most recently. Carolina's highest pick since the lockout is Jeff Skinner, but Eric Staal at 2nd overall in 2003 is the cornerstone of Jim Rutherford's tenure as GM. Is this the year one or more of the soon-to-be-defunct Southeast Division teams set a new course for their franchise?

These are the days when hockey fans are tested as much as their team's players and management. When the glory days arrive, it's years like this that make it so much sweeter. Enjoy your Sunday.