The Tampa Bay Lightning digital team launched "Bolts Social Central" earlier this season, a video wall behind section 128 in the Tampa Bay Times Forum. Fans can send their Tweets, Foursquare checkins, and Instagram photos using the hashtag #boltssocialcentral to end up on the video wall.

The Tampa Bay Lightning remodeled all four corners of the arena in the offseason and partnered with groups to sponsor these areas in the Tampa Bay Times Forum. But, Lightning employees were left wondering what would be done with the last corner, behind section 128. All other corners were sponsored except this one.

As the offseason progressed, the Lightning's digital team began brainstorming ideas on how the last corner could be sponsored. Finally, someone came up with an idea that the group would move on; they decided to transform the final section into a new innovative video wall, named Bolts Social Central.

Bolts Social Central is a unique place that encourages fans to mingle and interact with other fans during Lightning home games. Fans are encouraged to send Twitter messages, check in to the Forum via Facebook, or send photos on Instagram. By staying social, fans can end up on Bolts Social Central's video wall.

When fans interact in any way, they have a chance of winning prizes and getting retweeted by Lightning players and staff. The Lightning have also partnered with social media marketing company Thuzi, creating a digital-style photo booth where fans can upload photos inside of a penalty box.

Bolts Social Central was launched on Feb. 14 and it is open every home game. For the introduction of Bolts Social Central, the Lightning's digital team distributed cupcakes to the first 1,000 fans to check into the Tampa Bay Times Forum through social applications on their smartphones. In other games, fans could win t-shirts, hats, and even got to meet celebrity pitchman Andy Sullivan.

According to social media coordinator Julie Dolak, prizes and other incentives encourage fans to talk about the team on various social media platforms.

"Fans should be social every game and if we remind them by winning prizes, they will find out how fun it is and hopefully they continue to interact with other fans," Dolak said during a phone conversation with me. "When fans come to the game they should be thinking of sharing content from the game with other fans."

Fans are encouraged use the hashtag #boltssocial for every game, regardless of what social media site they are using. 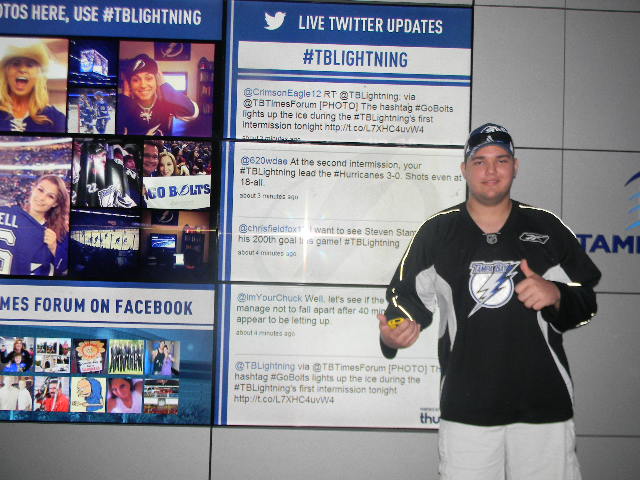 "We really found that if we remind people to share photos or use a specific hashtag they are more likely to do it and they will continue being social by interacting with the team online," Dolak said.

Tampa Bay fan George Sallas is impressed with the social media corner and visits it when he goes to Lightning home games.

"I think it is very unique," Sallas said. "It is cool to see people online during the game..it's like a community event and everyone is participating. I like to look at the wall and see different Tweets from Lightning fans all around the world.

Sallas likes to talk to other fans on Twitter while watching Lightning games so he can ask them their opinions on the team. Sometimes, he said, he misses a play and likes to catch up by asking fans on Twitter. He also returns the favor when his followers cannot watch the games.

"It is cool to talk with people who are at home who might have seen something on TV or vice versa when you are sitting at the Forum," he added.