The Capitals and Ovechkin are peaking at the right time as they look to solidify their grip on the Southeast. Will the Jets find the consistency to challenge?

Alex Ovechkin is the man of the hour in the Southeast Division, and perhaps in the NHL's Eastern Conference as he has re-discovered both his scoring touch and hard-hitting game to lead his club back to the top of the standings in the Southeast, a familiar spot for the Capitals and their fans in the last 5 or so years.

Since the Capital's humiliating loss in Boston to the Bruins March 16th, which now certainly looks like "bottom", the team has gone on a eye-popping 8-2-1 run. Ovechkin has had 13 goals and 19 points (and only 4 PIM) over that 11 game span and is now second to Steven Stamkos in goals scored on the season, with only a 2 goal gap to close. The possibility that Ovechkin could take the Rocket Richard this year is truly stunning given what was being said by everyone (everyone!) over the first few weeks of the season. Even among his detractors, hockey fans have to admire his remarkable turn around. Be sure to give a nod to coach Adam Oates while you're at it.

The Caps have ten games remaining to close it out, seven of which will be played on home ice, with no one else in the division even remotely looking prepared to challenge. Talk about peaking at the right time.

GM George McPhee, who's job security was highly scrutinized when the chips were down, didn't exactly sit tight at the trade deadline, sending highly regarded Filip Forsburg, the club's first pick in last year's draft to the Nashville Predators in exchange for veteran Martin Erat. Here's JP and Company's thoughts on this move.

Two Dudes: Martin Erat Comes to Washington - Japers' Rink Washington's posture as a buyer at the trade deadline surprised some, and their willingness to move a previously assumed untouchable piece for a veteran added to the collective eyebrow-raising.

The Jets were bumped from the top spot in the division this week as they earned the descriptor "Yo-Yo" in local headlines. Their five-game losing streak was snapped with gusto yesterday afternoon at the MTS Centre.

Yo-Yo Jets bring A game | Winnipeg Sun The ...resulting 4-1 romp over the feisty Flyers, Saturday -- by a team that was barely averaging a goal a game during a five-game slide -- is just the latest turn in a season as streaky as a kid's finger painting.

Or as the club's Head Coach Clause Noel phrased it after the game: "We are woefully inconsistent".

Could the Jets sneak in to the post-season? Sure. But it will be adventurous couple weeks in Winnipeg who has fewer games remaining to play (and, therefore, points to earn) than anyone else in the Southeast. They play just two games this week so by this time next Sunday we'll have a much better image of their chances as their game count "trues up" with the rest of the contenders.

There was unequivocal good news regarding young defenseman Zach Redmond who returned to skating Friday following a horrific life-threatening laceration to his upper leg suffered during a practice in Raleigh February 21. The scars tell the story. Redmond returns to Jets six weeks after gruesome injury | Patrick Williams, NHL.com .

The Hurricanes went 0-4 this week and have earned only 3 points in their last 12 games, with a record of 1-10-1 since they walloped Washington March 12th. With last night's 4-1 loss to the New York Rangers, they now can claim a seven-game losing streak at home, matching a ten-year-old franchise record for dismal.

A few weeks ago, the team seemed poised for their first playoff appearance since 2009. Now they can only wonder exactly what happened as injuries and inconsistent efforts have dropped their chances to less than 4%. Carolina's chances had peaked at over 94% March 12th. While mathematically, they may still have a chance, you have to wonder what ownership (including many new small-share investors) is thinking these days as they turn their sights toward the entry draft and the 2013-14 season in a new division.

Rutherford disappointed with results, couldn't find a deal worth making - Canes Country A frustrated and disappointed Jim Rutherford met the media after the Canes made but one deal on deadline day, saying that the team has underachieved and put him in a tough spot.

Also to consider, there are some very dissatisfied customers among the Caniac Nation. In hindsight, raising ticket prices 10% a few weeks ago looks like an untimely, if not disastrous, move in fan relations.

The biggest story for the Tampa Bay Lightning this week happened off the ice Wednesday as GM Steve Yzerman pulled the trigger on a deadline day deal to acquire young, big and talented goaltender Ben Bishop from the Ottawa Senators, paying a hefty price as he sent a strong candidate for rookie-of-the-year , forward Cory Conacher, the other way.

Bishop's debut in the blue and white did not disappoint as he won a key road game in Raleigh, shutting out the Carolina club 5-0 with a remarkable 45-save effort. He didn't fare as well in Nassau Coliseum last night, as the Bolts dropped further down the standings with a 4-2 loss to the Islanders. Here's the one sentence synopsis of the game from Raw Charge's blog boss, John Fontana:

You can't always expect your goalie to save your ass during a lax effort, and that's what Tampa Bay seemed to expect with a weak effort in Uniondale on Saturday night.

Steven Stamkos (25 G - 24 A - 49 Pts) and Martin St. Louis ( 9 G - 37 A - 46 Pts) are among league leaders for offense. Those numbers only go so far to mitigate the disappointment in Central Florida as the Lightning are unlikely to find themselves still playing hockey come May.

Like every team in the Southeast, the off-season efforts of Yzerman and Jon Cooper will focus on the challenges of a new division, determining what adjustments will be required throughout the organization.

Looking at only the "last 10" records of all the teams in the Southeast, the Panthers would be second only to the Capitals at 5-5-0 (which may say more about the Southeast than it does about the Cats).

Still, Florida endured another loss to those Capitals last night, helping their cause to secure the number one overall pick at the draft in New Jersey come June. Western cellar dwellers Colorado and Calgary are the others likely to make a push.

The team welcomed 2010 first rounder, Nick Bjugstad to the NHL this week after his college season with Minnesota ended last weekend. Bjugstad is among many promising prospects the fans can look forward to seeing - something to focus on when the near term is far less rosy.

Here's a look at how that might play out and who else will be contributing to the club next year as I checked in with Three questions with Florida Panthers blog Litter Box Cats With the Panthers closing in on the 1st overall pick, we asked 3 forward looking questions of Litter Box Cats' Alex Calloway: Who's Tallon likely to select? Will Jovanovski return next year? Which prospects in the pipeline hold the most promise?

Again, from SportsClubsStats.com, your one-stop link to see the playoff odds for every team in the NHL is the 2013 NHL season narrative in a single image. For fans of three of five teams in the Southeast, you might be more interested in their charts indicating odds of getting the first overall pick linked here. 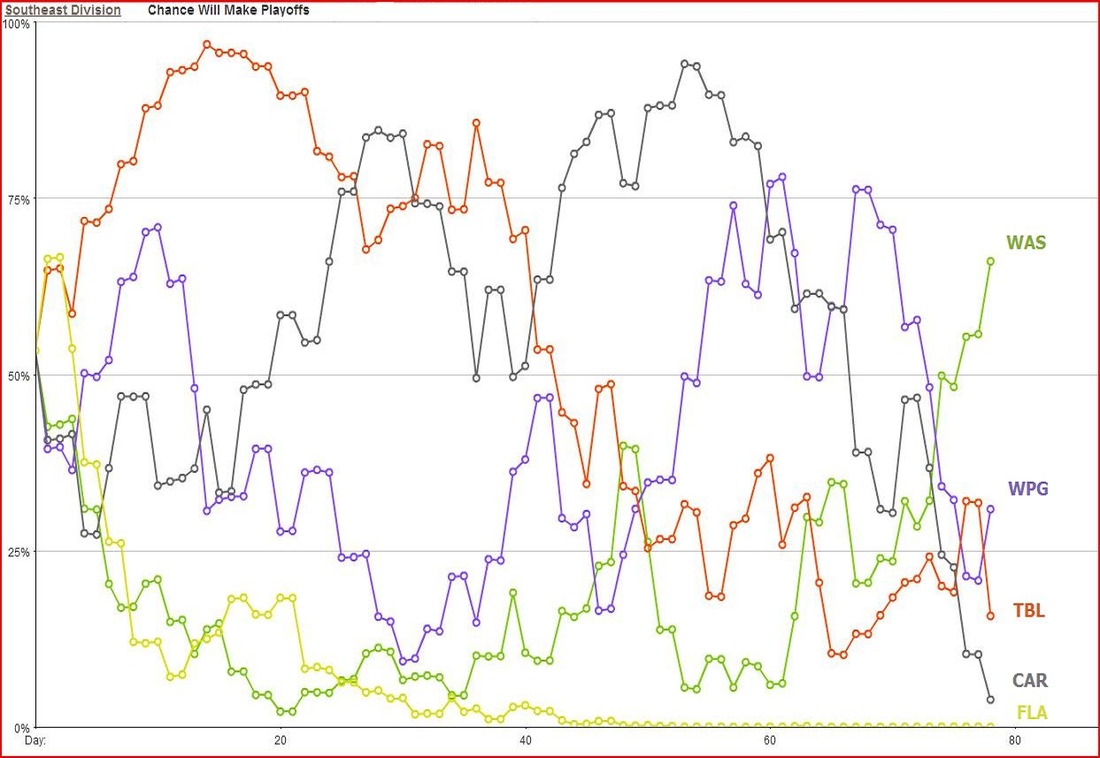