The Syracuse Crunch went 4-1 in the third round of the Calder Cup playoffs against the Wilkes-Barre/Scranton Penguins, coming out on top in game 5 in stunning fashion to advance to the Calder Cup Finals.

I have an apology to pen before I get started here.

I'm a writer who regularly frustrates our wonderful editor here at Raw Charge because I tend to oscillate, sometimes rather abruptly, between sounding like a fan and sounding like a beat writer. John says it's part of my charm, but I also know it must be rather difficult for him to make any kind of flow or sense out of it sometimes. It's a style I developed while talking to myself over at my other home, and it's a writing style that I often find really easy to slip in to and hard to slip out of once engaged.

I'm sorry, John, for the hell I'm about to put you through.

I know Bolts fans have been here before, so this isn't new territory for readers here. I dare say last year may have been even a bit more exciting, simply because of the run Norfolk was on before the playoffs even started.

But for me? Oh, my God. This is new. So new, in fact, that it still hasn't completely settled in yet. This picture is on my phone currently, and sometimes I feel almost startled by it, as if I wasn't the one who put it there or wasn't the one who took it Saturday night: 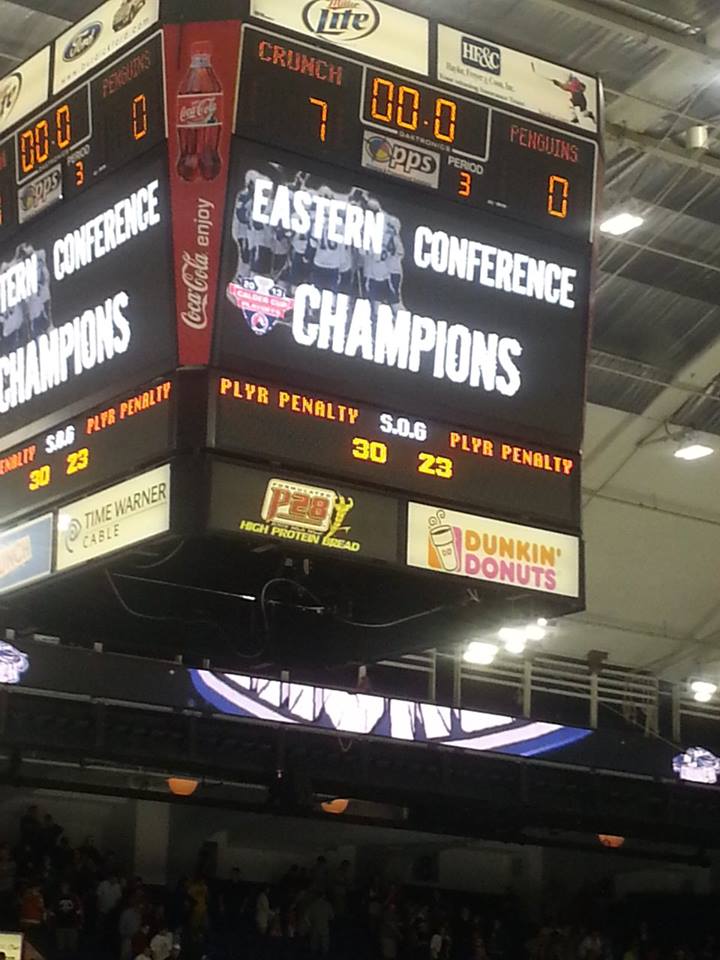 I know we're still one round away from the ultimate prize, but this feeling right here? I know, conceptually, that it can--and hopefully will--be topped, but right at this moment it just doesn't feel like it can. The Crunch faithful, the people who have hung in there for 19 years without much a whiff of any hope of a conference championship, let alone the ultimate prize, are now four games away from the biggest trophy in the league.

I had made the trip to Friday night's away game in Wilkes-Barre/Scranton (WBS), and watching Syracuse fall behind twice and then get the equalizers within two minutes each time was exciting, to be sure. The Crunch could smell penguin blood on the ice, and they were swarming like sharks. They were bolstered by the pockets of Crunch fans who had made the trip down, and they knew a win there would set them up perfectly to clinch the series at home.

In an interview with Syracuse's Post Standard after that Friday game, Crunch player Ondrej Palat, who is well on his way to being named playoff MVP with a league-leading 20 points, had this to say about going back home after that win:

Wilkes-Barre is a really good team. But we're playing at home. The fans are cheering for us. We believe we can end the series tomorrow.'

They believed it, and then they did it. Saturday night's game was even more perfect than many of us ever imagined it would be.

As you can tell by the score in my picture, the final Saturday night was 7-0. Syracuse not only shut down the Penguins offensively, they also decimated a defense that had led the league during the regular season. Attendance at the War Memorial that night was 5,615, the largest for a Crunch home playoff game since 2004, and the crowd loved every single moment.

In a surprising move, one that may have changed the course of the game, Wilkes-Barre went with goaltender Jeff Zatkoff to start the game in place of Brad Thiessen. Zatkoff had been king of the Pens during the regular season, playing 49 of their 76 games and going 26-20-0-4. Zatkoff was the man between the pipes during the Pens' sweep of the Binghamton Senators during tthe playoffs opening round, but then had a shaky start during the Semifinals, losing the first two games of that series to the Providence Bruins.

After those first two games, WBS made a change in net and put Thiessen in. Thiessen would eventually backstop the Pens through their record-breaking comeback as WBS fought from a 0-3 series hole to take round two in game 7. Thiessen would then go on to hand the Crunch their first loss of the post season, a 4-2 downer to open the Eastern Conference Championship series..

Thiessen's record, however, would crumble from there. He allowed the Crunch to score 9 goals in the next three games of the series, putting WBS in a 3-1 series hole. The Pens coaching staff obviously felt it was time for a change and called on Zatkoff to be the hero of game 5 for the Pens.

The Crunch was clearly amused by this, and it showed. Eleven different Crunch players found their names on the scoresheet Saturday night. The 7 goals came from all over the Crunch's depth chart, with contributions from Vladislav Namestnikov, Radko Gudas, Dan Sexton, Ondrej Palat, and, perhaps most surprisingly, a hat trick from Philippe Paradis. Paradis, acquired in a trade during the regular season and originally meant as just one more body for an increasingly depleted Crunch, has rather become the Crunch's diamond in the rough.

In addition to Paradis' hat trick, several Crunch players had a multi-point night. Andrej Sustr had two assists, as did Mark Barberio. That makes three defenseman, including Gudas, who found their way onto the scoresheet. Sexton had a three point night, netting two assists in addition to his goal.

Sexton, who played in Syracuse during the Anaheim Ducks affiliation and was traded back here in exchange for Kyle Wilson, has clearly been enjoying his time back in Syracuse. Before the trade, Sexton was 5-11-16 in 27 games for Norfolk. Post-trade, Sexton went 4-8-12 in 16 regular season games with the Crunch, and has gone 4-6-10 in 12 playoff games. His speed has confounded the defense of every team we've played so far this post-season.

The Richard F. Canning Trophy, awarded each year to the top team in the Eastern Conference, will be given to the Crunch at the start of the Calder Cup Finals. Who the Crunch will be playing in the final round of the playoffs is yet to be determined, as the Western Conference finals is still playing out. That series, which puts the Grand Rapids Griffins against the Oklahoma City Barons, is currently at 3-2 Griffins. The Barons have had a rough time of it lately, with the severe weather in their section of the country postponing games and prompting league donations. That series now returns to Grand Rapids, with game six scheduled for Tuesday night. Game 7, if needed, will be Wednesday.

As the highest-seeded team remaining in the playoffs, the Crunch will have home ice advantage in the Finals. Tickets for Game 1 and Game 2 of the Calder Cup Finals went on sale at 10 a.m. Monday. IThe finals will begin on Saturday, June 8th.

If the crowd Saturday night was any indication of how desperate Syracuse has been for this brand of hockey, then I can only imagine how many people will pack into War Memorial for the finals! This is such a magical time right now in Syracuse. Tampa fans should be nothing less than completely stoked about the talent coming down the pike!