Weekend Edition: Read all about it!

For the offseason, Lightning Links will become "Weekend Edition" (on Fridays) and "Afternoon Edition" (on Tuesdays.) Feel free to talk amongst yourselves in the comments section, and have a great weekend.

Share All sharing options for: Weekend Edition: Read all about it!

All the news that kinda, sorta, maybe fit to print.

Lightning open 2013-14 schedule at Boston, Chicago | Breaking Tampa Bay, Florida and national news and weather from Tampa Bay Online and The Tampa Tribune | TBO.com
The NHL finally released the schedule for next season, along with the new division names. The Lightning may be competing in the "Atlantic division" but they'll always be #Flortheast to me. Full schedule

2013 NHL Entry Draft: Why the Tampa Bay Lightning Passed on Drafting Defense | Lightning 101 | Sports Media 101
Kyle Alexander of Lightning101 took a look at the Lightning's draft, and he's not worried about the team skipping the defensemen this time around. "So before you call for Yzerman's head, or bemoan the lack of defensive depth the Lightning possess - remember that just because a position wasn't drafted this year, doesn't mean there isn't help coming at that position soon."

Time Running Short for NHL Goalie Gear Reductions - The Goalie Magazine - InGoalMag.com
The NHL and the NHLPA have agreed to make changes to goaltender gear, but like everything else this year, the details are not getting hammered out very quickly, and that's a problem. Gear has to be chosen, ordered, made (this is after all 100% custom work), approved by the league, and tested by the goalies. It takes a while for all that to get done and if you've got 60+ guys doing it all at once....well, you get the picture.

As for the impact of these changes, don't expect anything earthshaking. Goaltender equipment has had less real impact on scoring than changes in goaltender techniques and changes in the number of power plays have. Most guys are fine with changing it, though, as long as they're not compromising safety. The most talked about change--decreasing the thigh rises--will allow a few more 5-hole goals a year without putting goalies in much greater danger. The problem will come if cutting down chest, arm, and knee protection allows more shots off those composite sticks to bruise players and create greater stress on knees and hips when dropping to the ice. It will be interesting to see whether goalies are out more frequently as a result of such changes.

Shannon Proudfoot talks about breaking up with Daniel Alfredsson
Ottawa journalist Shannon Proudfoot wrote about what it was like to watch the face of the franchise walk away and sign with another team. Gee, that seems awfully familiar somehow.

How much do "character guys" matter to a team? | Backhand Shelf | Blogs | theScore.com
Justin Bourne tackles the question of character, pooh-poohed by hard-hearted stats guys and lauded by old-school romanticists. It may not earn you wins, he says, but "having people who purify the air from becoming toxic makes some sense." After all, a hockey team is a workplace with particularly intense personal interactions.

Gilbert Brule, and how off-ice issues can greatly affect on-ice performance | Backhand Shelf | Blogs | theScore.com
More from Justin Bourne, who talks about how having a crappy personal life really can affect your play, even if you're a professional. Beacuse of that whole "human being" thing.

NHL concussion epidemic: Getting better or remaining a crisis for player safety? | Puck Daddy - Yahoo! Sports
Has the NHL gotten results from rule changes about targeting the head? "Dr. Michael Cusimano of St. Michael's Hospital in Toronto compared concussion rates before and after the NHL made rules to target head shots. And he found that the League hasn't made great gains in the fight." Most of the problem is that about 60% or so of the concussions Cusimano looked at were the result of clean, body checks, not illegal head hits. Cusimano's prescription? Tougher penalties for head hits and make fighting illegal. Um...okay?

Nill making 'Big D' the Winged-Wheel way - The Hockey News
Apparently Steve Yzerman's not the only guy looking towards the Detroit model for inspiration and guidance. The Dallas Stars' new GM Jim Nill is even raiding the front office.

NHL - John Buccigross: The Blake Geoffrion story - ESPN
Many of us remember the game at Montreal's Bell Centre where the skate of Syracuse Crunch defenseman J.P. Cote caught the side of Hamilton Bulldog Blake Geoffrion's head. Geoffrion was left with a depressed skull fracture and some pretty intensive healing to do. He just announced his official retirement from playing professionally, and has taken a job with the Columbus Blue Jackets as a scout.

I remember Blake well from his time in Nashville. I have never met a professional player who made me feel more like a mom than Blake Geoffrion did. This article by John Buccigross about the Geoffrion family, Blake's injury and its aftermath for all of them only reinforces that feeling. And as J.R. Lind noted, not only was Geoffrion a very Preds-y kind of player, he scored the Preds-iest hat trick that ever was in his first NHL season.

The Most Notorious Villains in NHL History | Last Word On Sports
On the heels of Alfie's heel turn, Rory Harbaugh looks at the NHL's biggest villains. I applaud the mention of Jarkko Ruutu, who is widely despised in Finland these days, especially after a cheap shot on a draft-eligible kid (Artturi Lehkonen) in February. Lehkonen was stretchered off; Ruutu got three games.

NHL & NHLPA Reach Agreement With IIHF For Player Participation in Sochi - Tampa Bay Lightning - News
We've heard this was coming for some time, but now it's official. After picking each other to death, the NHL has finally gotten an agreement with the IIHF to allow for NHL players to participate in the 2014 Olympics in Sochi, Russia. As someone who has been looking forward to this for four long years, I say, thanks for not screwing this up, Gary.

Mark Barberio assesses 2013 season in Syracuse - YouTube
Barberio just signed a one year, two-way deal with the Lightning. Most observers think he's got a great shot at making the Lightning out of training camp this year. This video done for Syracuse.com features Barbs's thoughts on the Crunch's 2012-13 season.

Keeping fans in the stands is getting harder to do - Yahoo! Sports
Yahoo! Sports tells us that attendance in U.S. sports has declined or leveled off the last three to five years. Except in hockey. The moral of this story: Begin stockpiling supplies for the next lockout.

The Sault Ste. Marie Greyhounds and their not-so-secret use of analytics | Buzzing The Net - Yahoo! Sports Canada
The junior team is well-known for their collection and use of many of the so-called advanced statistics that are being used in hockey these days. More importantly, they're refreshingly open about them and what they mean (and don't mean.)

Is Jonathan Drouin's Success Due to the Play of Nathan MacKinnon? | Bolt Statistics
I can't say enough good things about Mike Gallimore and Kyle Alexander's new Lightning-centric statistics site. For instance, here's a WOWY (With Or Without You) analysis of the 3rd overall draft pick Jonathan Drouin. WOWYs are unusual even for the NHL, as the data's not all that easy to get at.

Team Luck - Hockey Abstract
Rob Vollman's Hockey Abstract presents an interactive chart showing how "luck" played out for all 30 teams last season. The Lightning didn't do as bad as you might think, largely because of a weird PDO year. With PDO, they were 17th. Ignoring PDO, they're 26th. Having seen this, I wondered how the team's PDO changed over the season. It was astronomical over the first few weeks, but ended up at 985 for the season as a whole. Pretty sure the word "plummet" is a possible descriptor.

Nashville's Rich Clune recently signed a new contract that appears to have an unusual addendum:

Here's the last page of my new contract I just signed ok pic.twitter.com/MVHqIfHAG9 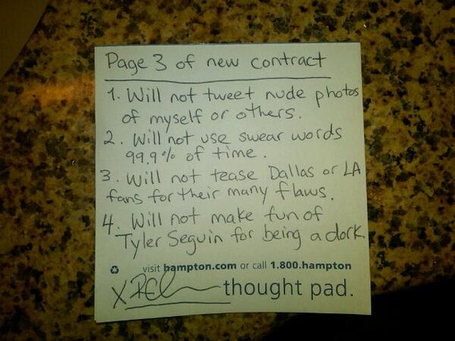 And Boltprospects has this take on news about a new contract for Brendan Mikkelson:

Congrats to former #TBLightning and #SYRCrunch Brendan Mikkelson, who signed with the Penguins. pic.twitter.com/D8s8oX64oY 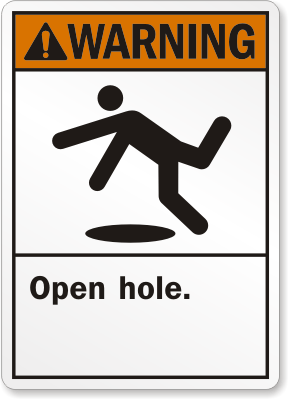