Martin St. Louis and the question of decline

Has the 38-year-old really lost a step? We look at some data to address the question.

Share All sharing options for: Martin St. Louis and the question of decline

Martin St. Louis is getting older. He's 38 now, after all, so the issue of his age is naturally coming up. And it seems that whenever a major transaction occurs, the question arises of Marty's Decline. We hear it a lot. He's getting up there, has lost a step, is losing the defensive battles. He can't keep up, some suggest. It's sometimes followed by a proposal that the team trade him while his value is high.

And, around here anyway, any hint that Marty might be on the decline is met with--well, some hostility. I must confess, however, that this is a question that's been floating around in my head for a while, too. I can see why fans would be concerned, especially since Marty had a serious eye injury just about eighteen months ago. But I'm also aware of the dangers of confirmation bias: we tend to notice the things that confirm our theories while the evidence that might challenge them doesn't stand out as much.

So when the issue arose again after Vincent Lecavalier was bought out by the Lightning, I decided to sit down and check myself.

Is there objective evidence that would support the idea that age is catching up with our beloved Marty or not? Is the story of Marty's Decline a myth or a reality?

Over the past 6 years between 2007 and 2013 (the period for which this data is available), St. Louis shows no decline in his ability to take the ice. But then no one expected it to. 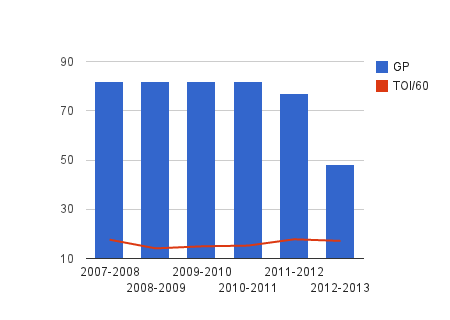 No decline in games played or time on ice. 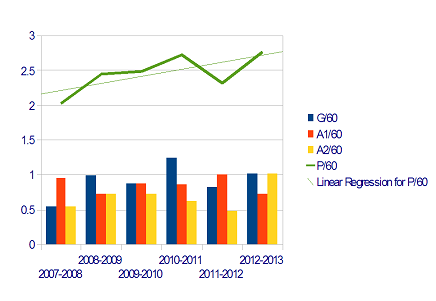 Over this period, his points per 60 minutes of ice time increased, and goals as a proportion of his points is also trending upward. Marty scored .85 goals per 60 minutes over this span as a whole, and has met or exceeded that number in the past two seasons.

These are all the go-to things we've used to show that there is no decline. He's playing as much as ever and scoring as much or more than ever. What about his Corsi (On-ice Shooting Attempts), though? 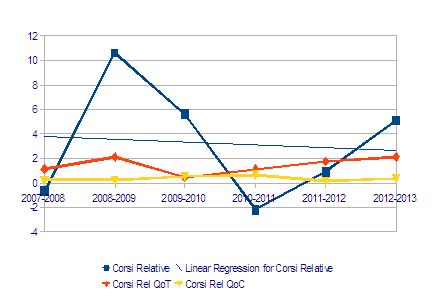 When you look at his underlying shooting numbers, things to start to show up that may indicate there's something to this idea of decline. Corsi Relative, the heavy blue line above, indicates how much the Lightning have been shooting when Marty's on the ice relative to how much they shoot when he isn't. A positive number means that the team attempts more shots when he's playing than when other lines are on. A negative number means other players are generating more shot attempts than his line.

This figure always varies a lot over time. That's true for all players. The trend for St. Louis's shooting, however (the lighter blue line) is generally going down, even as the last two years have seen an increase from his 2010-11 low. Remember, though, that this increase is relative to other players on the team. As the team around Marty got worse, his contributions got more valuable.

Teammates have enormous impact on the ability of players to generate shot attempts. If the guys you play with on a regular basis aren't getting into shooting position very often, no one's going to have a lot of chances to get pucks towards the net. If all the lines on a team are having trouble getting into and staying in the offensive zone, everyone's Corsi numbers will decline. So the question then becomes why haven't Marty's numbers declined as much as the rest of the team? Is it because of something he's doing or because of the lines he's playing on?

The orange line in the graph above shows the quality of teammates that Marty's been playing with. Over the years, he's been on lines that have gotten better at shooting (relative to the team as a whole). It's a gentle rise, but it's there. This indicates that his contributions are being helped along by the play of others on the team in two ways. First his linemates are shooting more and second everyone else is shooting less.

This has the effect of making St. Louis's contributions to the team more important even as his personal shooting is declining. And it is declining 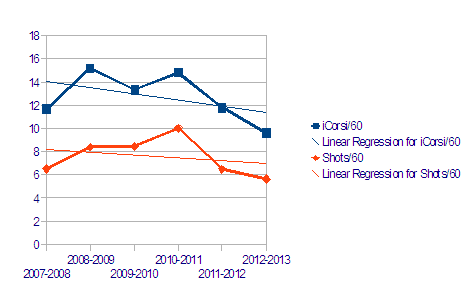 This graph* shows that Marty is shooting less than he was in earlier years. The orange line shows St. Louis's shots counted as on goal. The blue line shows all his shooting attempts, whether on goal, missed, or blocked. He's not getting less accurate. He's getting fewer shooting attempts. Again, this is greatly influenced by the play of his linemates. If they're not getting into position very much, he's not going to get a lot of chances to shoot. Nonetheless, there is an observable decline in St. Louis's shot production over the past two years. [*Zone-Start Adjusted at 5v5 in close situations.]

I wondered at this point whether a decline could be seen in players not faced with the age question. That is, since the team has been in decline over the last two years, maybe St. Louis's decline is more related to that overall crappiness than to his personal play. Here's what I found. 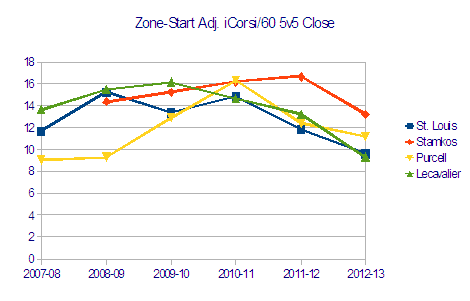 Sure enough, all three of Marty's top forward linemates (Steven Stamkos, Teddy Purcell, and Vinny Lecavalier) have experienced the same decline over the past few seasons. Basically, everyone sucked at generating shots since the 2010-11 season. It's not a problem exclusive to St. Louis, but one that has affected the entire team, regardless of their age.

So what do we take away from all of this? First, yes Martin St. Louis has experienced some decline in the past two years. It's a decline not in scoring but in shooting, and that's rather worrisome, since it indicates problems getting into scoring position. Your eyes have not, in fact, been deceiving you.

However, the entire team has experienced some kind of decline, including players much younger. These shooting declines mirror Marty's with the exception of Steven Stamkos's increase in shooting from 2010-11 to 2011-12. Even Stamkos, however, had difficulties over the past season, and his shooting rate dropped precipitously, confirming the impression that the decline in shooting was team-wide and not related to the play of any single player.

In the end, this data indicates that while there has been an observable decline in St. Louis's play over the past two seasons, that decline is related to the larger picture of poor team play. In fact, St. Louis has declined less powerfully than the team as a whole and his contributions have gotten more valuable as a result. It's very hard to attribute much of this drop in production to aging when Marty's doing better relative to his teammates.