What is a "normal" career path for goaltenders drafted into the NHL? Part one: How has NHL goaltender drafting looked in the recent past?

The near-constant talk about Lightning goaltending prospect Andrey Vasilevskiy as "the goalie of the future" for Tampa Bay got me thinking. What exactly is "normal" development for a goaltender? That is, if Vasilevskiy is the guy everything depends on, how fast is too fast to push him into the NHL?

My gut reaction on this is that while it might be possible for him to go a little faster than is normal for a goaltender (in other words, exceptional talent creates exceptional conditions) there's still quite a bit of growing to do before he leads the team to the Stanley Cup. But that really depends on what "normal" actually is for a goaltender. We hear that goalies take longer to develop than skaters, but I've never seen any real in-depth look at the subject that takes into account both busts and superstars.

This ended up being a huge project, so I decided to break it down into several parts. This first part is an introduction to my methods plus some overall observations about what goaltender drafting looked like between 2000 and 2010. This gives some indication of what the broad population of young, drafted goaltenders looked like during the period and what happened to them as an overall group. It relies on goaltender stats from hockey-reference.com and eliteprospects.com.

1. It's hard to be successful at this game.

Of the 182 goaltenders drafted in the first half of the study (2000-2005)--that is, those who are at least eight seasons past their draft year--76 (41.8%) have played at least one NHL game and they average less than 50 total NHL games apiece, or about 4.3 games for each year since their draft. Only 23 players have a ratio of more than 15 games to every season since they were drafted. In other words, only about 8% of goaltenders drafted in this period had become a consistent, starting goaltender within 8 years of their draft.

...And what real changes there have been owe as much to changes in the way the draft is run as to any shift in thinking about how to draft goalies. 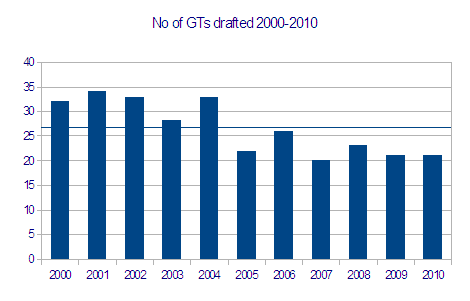 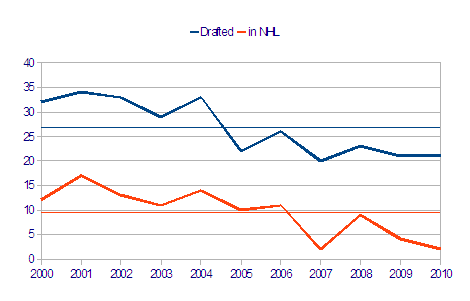 There is some possibility that the number of goaltenders drafted has been declining in the most recent years. In the three years since 2010, there have been 20, 23, and 21 goalies taken, which averages to 21. It remains to be seen, however, if this is a long-term trend or simply normal year-to-year variation.

The worst year for goalies was 2007. Not only were the fewest goaltenders drafted, but only 2 of them have played any NHL games at all and they've only played 12 games between them--Allen York (11 games) and Timo Pielmeier (1 game). Only 2010 has seen a lower percentage make the jump to the NHL, understandable given that it has been only three full seasons since that draft.

Average draft position has been fairly stable as well. 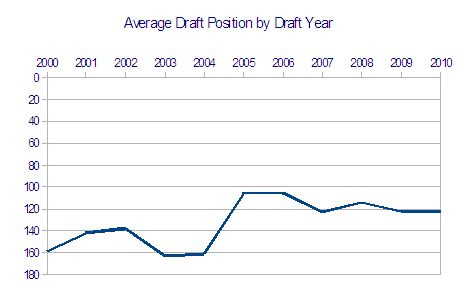 Again, as the bottom dropped off the draft, the average draft position got higher. But it was fairly stable before the change and very stable afterwards.

It is possible that this is a reflection, as House of Puck says, of a change in thinking about how to draft. Or it might be a function of a lack of competition for the goaltenders teams want (that is, teams may feel that they know something other teams don't about specific players, so they can wait to take a player in a later round.) It does appear to be the start of a trend, but we really don't have any way of knowing whether that can be chalked up to a change in the way the NHL general managers view overall drafting strategy or something else. (Or, more likely, a combination of many factors.) I think it's probable that when there is a consensus that a young goalie is desirable--like Vasilevskiy and Malcolm Subban were in 2012--GMs will take them whenever they feel they must. 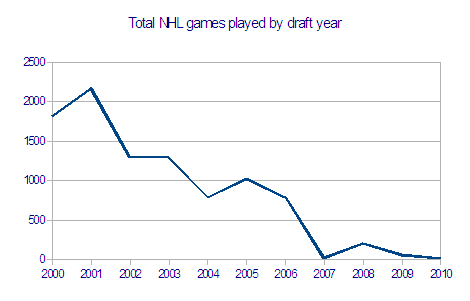 This is the number of NHL games each draft class has played. Obviously, the longer it has been since a player was drafted the more opportunity to play NHL games. Note, however, that the last four years of the study are more or less at the same level (see chart below). There is, in fact, a big jump in games played once we get four to five years out from a draft, fair indication that it takes a long time to see real return on investment with drafted goaltenders. (Note: this is a total of 9,393 games.) 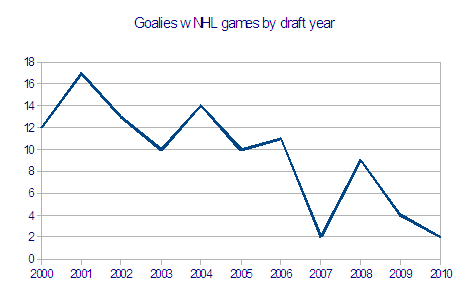 Aside from the clunker of 2007, that's about what one would expect--the longer it has been since a goalie was drafted the more opportunity he's had to play at least one game in the NHL. 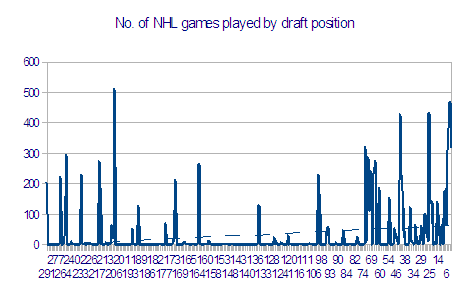 I found this interesting. More goalies taken in the earlier rounds (on the right side of the chart) play more games overall. Success tends to drop off after about draft position 75. Not shocking. These are the guys that everyone thinks will do well, so they're high on everyone's list. It's the back end that shows something interesting. There's a good number of fairly productive goalies taken after #200, which means either some scouts have been good at identifying players no one else noticed, or--more likely--it's really hard to predict how a goaltender will develop over time, especially when they're draft age.

I should say, I suppose, that it's fairly likely that there are scouts out there who are better at identifying goaltending talent in teenaged players than other scouts are, and it's likely that at least some of those scouts are employed by NHL teams. But the misses there still outweigh the hits, and it's also likely that luck plays a big role in developing a player with raw talent into someone with 200 or more NHL games.

For the next portion of this study, I'll be looking more closely at those players who did make the NHL for at least one game, with a more specific breakdown of what their career paths have looked like.