How does draft round affect a goaltender's development path?

Share All sharing options for: Normal Goaltender Development, part 3: By draft round

This is part 3 of a series dealing with "normal" goaltender development after being drafted, and in this post I'm looking at the relationship between draft position and career path. You can find the earlier sections through the following links:

There are three "axes" of analysis in determining how players' careers progress after their draft:

And looking at these three things in relation to draft position gives us an admittedly imperfect tool for relating talent level to career path, at least at a macro level. Again, these averages elide a great deal of individual variation and should be taken as descriptions of groups of goalies rather than predictors or evaluations of specific individuals.

I need to start off by correcting an error in this chart from part 1.

While the numbers are correct by draft position, it was a mistake to assume that draft position corresponded to draft round cleanly. For instance, while 31 goaltenders have been drafted between positions 61 and 90, not all of those draftees were actually taken in the third round of their respective drafts and not all third rounders were taken before number 91. The number of draftees per round varied from year to year, so each goaltender needed to be assigned to his actual draft round manually.

That has been done for part 3. And this corrected chart shows the general draft profile by draft round, as opposed to overall draft position. These are the averages taking into consideration all draftees, even those who have never played a game.

Note: from this point on when I say "Round 8" it includes Round 9.

The conclusions drawn remain the same. The most successful goalies in terms of games played are the first rounders, followed by 2nd & 3rd, then the late rounders, then the middle rounders. This is even more starkly apparent when we include the number of goaltenders who become starters for even one season (defined here as a year where a goalie played at least 60% of a season's games). 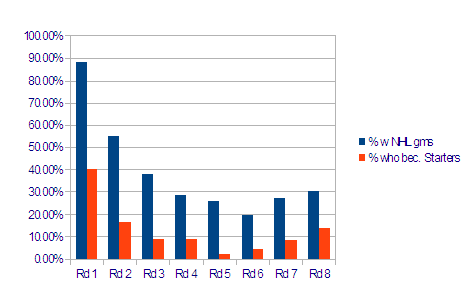 For goalies with at least one NHL game, career paths look like this.

There are a few important things to notice here. One thing is that few high draft picks go into the NCAA, which should factor into our understanding of an NCAA goalie's career progression. We should also note that every goaltender spent at least one season in a primary minor league (AHL, SHL, or KHL). None of them "leapfrogged" directly to the NHL, and the vast majority, regardless of draft round, had at least one "callup" season with games in both the AHL and the NHL.

For virtually all goalies, the path to the NHL leads through the AHL at some point. In fact, only two of the goalies studied have played zero AHL games: Henrik Lundqvist, who spent 4 years in the SHL before becoming a starter for the New York Rangers, and Alexander Pechursky, who played in the WHL and CHL (and one game with the Pittsburgh Penguins), but has spent the rest of his career in Russian leagues. Regardless of talent level or any other factor, everyone plays in "the A" at some time.

How fast do players move through the phases? With some exceptions, I found very little overall variation related to draft round. For instance, the overall average length of time in juniors (among players who went into that phase) was 1.63 seasons, and no round averaged more than 1.8 years (round 2) or less than 1.25 years (round 6). There was no real pattern to the differences, though goalies drafted in the late rounds spent slightly less time in this phase and more in others (especially secondary minors). Early draftees did not spend significantly less time there than the overall population.

Thus I feel that it's possible to say that there's a fairly normal career path that includes the following milestones: about 1-2 years in juniors OR about 2-3 years in the NCAA, some time in a secondary minor league (see below), and about 4 years in a primary minor league, including at least one year in the AHL and the NHL. The average player gets his first game within 3-5 years of his draft, but there's a great deal of variance in the timing of that, and early draftees see a slight advantage in that department.

The secondary league pattern came closest to the kind of pattern I think most of us assume players go through. Players drafted in later rounds played appreciably more time in secondary leagues than players drafted in early rounds. This may have a relationship to age, because as I noted earlier, later draftees spent less time in junior leagues, which are age-restricted leagues. 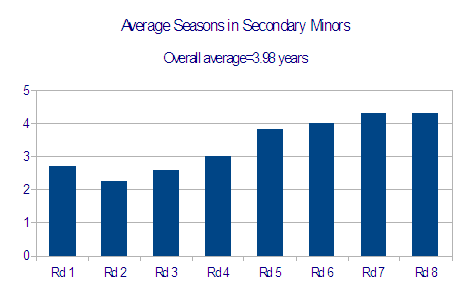 Here I measured longevity in the number of seasons in which a player played any NHL games, and production in number of NHL games.

Overall, the 104 goalies average 90 total games and three and a half NHL seasons.

As we've seen before, middle rounders tend to have less success in both the length of their career and the number of games they play.

There's one more way to look at longevity, production, and speed of progression: the ratio of games played to years since a player was drafted. If a player gets to the NHL quickly, stays there, and plays a lot of games, he'll score high on this list. Career backups and players with brief careers where they were starters will score better than recent draftees with only a few games, who will in turn score better than players who had a brief stint in the NHL before dropping out of the league.

Less than 20% of NHL goalies have a ratio higher than 20; more than 65% have a ratio lower than 10. Early rounders account for 7 of the 9 players who score above 30. However, this score also shows how successful late round players can be. Although about half of players in rounds 7-9 score less than 10, 5 of them scored over 20.

The top thirty netminders by score:

Rounds 1-3 are well-represented, and rounds 7-9 make a respectable showing, but only 4 of these players comes from the middle rounds. Workhorses who've been around a while are at the top, followed by younger starters and long-term backups. Only four of these top thirty are no longer active in the NHL, indicating a productive but brief career.

I think that this is a good indication of how individual players' career arcs related to the population of all drafted goaltenders as a whole. These top 30 are the guys who got to the NHL faster, stuck around longer, and were relied upon to a greater extent than 90% of goaltenders drafted between 2000 and 2010. They are, by definition, the high-end outliers in terms of career progression, and it's important, I feel, to remember that.

This was originally intended to be as far as I would go with this project, but the question of age has kept coming up: age at draft, age at first NHL game. There are questions such as whether, overall, we are making assessments about potential at too young an age and whether there's greater success among players drafted when they're too old for junior leagues.

Thus, I'm planning on adding age as a final analysis as soon as I can get the new data gathered and analyzed. In the meantime, I'll do a wrap up of the conclusions we can and can't draw from this data for next time, in particular as this huge amount of information relates to my original question of how fast is too fast to push Andrei Vasilevski.