Where do the Lightning stand at the almost midpoint?

Share All sharing options for: 2013-14 Lightning advanced statistics through game 40

As always, I start with PDO, which is 5v5 save percentage + 5v5 shooting percentage and which measures the effects of randomness on the team's results. Right now, the Lightning are 8th in the league with a PDO of 101.5 (at close). (PDOs above 100 will tend to come down and PDOs below 100 will tend to go up.) That's a bit high for this point in the season. It's the result of a 7.2 shooting percentage and a .943 save percentage. I feel like with this roster, a scoring rate between 7.5 and 8.5 is pretty close to the sustainability sweet spot, so I don't expect huge changes there. Goaltending, though, is sky high. It will come down sooner or later.

That means that the Lightning will see more goals against. Let me make this point very clear: NOTHING HAS TO "GO WRONG" FOR THIS SAVE PERCENTAGE TO COME DOWN. IT WILL COME DOWN SIMPLY BECAUSE MORE GAMES WILL BE PLAYED AND MORE DATA WILL BE ADDED. But if something does go wrong, it may come down precipitously. There is a possibility, goaltending being the crazy random beast that it is, that it won't happen this season, but my gut's telling me it will start to level off some point before May.

The Lightning's possession has been improving over the past two months, as this chart from ExtraSkater.com makes clear. Except for a dip in late November-early December, the Bolts have stayed above 50% in unblocked shot attempts when the score is within one goal (or tied in the third period). That means, basically, that when things aren't desperate for either side, the Lightning are controlling play more often than not. 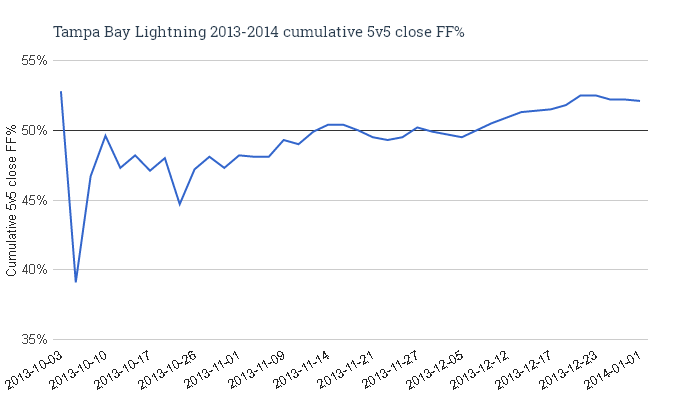 This led to a question asked on Twitter by reader Rafael Amarante: what's leading to this development, coaching or the young kids coming into their own? I suggested that the work of Valtteri Filppula might deserve some credit. Raf then asked if the absence of Steven Stamkos was playing a part.

There is a fairly common belief that Stamkos is bad defensively. Or maybe it's less a belief for some people than it is a fear. Let's take a look.

First, it's important to note that Stamkos play[ed] a lot of minutes, so he's going to have a lot more opportunities for things to go either right or wrong than someone who's on the bench more. Second, he faces competition that generates shots. While over the years there have been players on the Lightning who faced tougher competition on a regular basis, Stamkos rarely faces players who shoot less than they give up. This season, in fact, he was facing the toughest competition of any player on the roster.

So, is Steven Stamkos a possession anchor defensively? To be honest, although he's not a defensive star by any means, there's no real evidence that he's defensively horrible, at least not enough for people to need to worry about it. While his linemates do tend to give up more shot attempts against while he's on the ice than they do while he isn't, the difference isn't a huge one--less than one shot or shot attempt every 20 minutes of 5v5 play, whether the score is close or not, whether adjusted for zone start locations or not.

These numbers are just from this season. Last season his teammates did worse defensively without him. If you go much further back, however, you start to see this difference go back up. That is to say, when he was even younger than he is now, he was worse (sometimes much worse) defensively than he has been the past two seasons.

Yes, Stamkos has a tendency to see a lot of shot attempts go against him. He's not a defensive player, however. He shoots a lot and faces opponents who shoot a lot as well. Once you take all of that into consideration, it's hard to say that Stamkos's defensive problems are a possession anchor for the team as a whole.

That doesn't really answer Raf's original question and tell us what does account for the increase in possession over the past two months. I tend to think that it's a combination of all of the things mentioned: coaching and systems, the younger players hitting their stride, and the contributions of veteran players like Valtteri Filppula. It's almost impossible to untangle all of that to point to a root cause, and I expect these things are feeding on each other, making the whole greater than the sum of its parts.