We've officially played 51 games of the season, and it's time to check in on the analytics to see what the underlying numbers can tell us about how the Tampa Bay Lightning are performing of late.

Share All sharing options for: 2013-2014 Lightning advanced statistics through game 50

Last night's match-up at the Tampa Bay Times Forum versus the Ottawa Senators was the 51st game of the 2013-2014 regular season for the Tampa Bay Lightning.

So, now well past the season's midpoint, how are the Lightning doing "under the hood"? (As always, all numbers and graphs are pulled from Extra Skater.)

As always, we start with PDO, which is likely the "simplest" fancy stat, but the one that can tell you the most about recent trends in a team (or player's) overall game by giving you a sense of variance (luck) in shooting and save percentages. If you've missed our previous 10-game stat reports, PDO is simply [5v5 shooting percentage] + [5v5 save percentage] = [PDO]. Over large samples, PDO tends to regress towards 100; so teams over 100 are experiencing some good luck in terms of their shooting and save percentages, and those under 100 are hitting a cold streak. Both can be expected to regress towards 100 over time.

The Lightning currently sit at 101.9 at 5v5 Close, which is very, very high (4th in the entire NHL behind only the Anaheim Ducks, Colorado Avalanche, and Boston Bruins). The elevated PDO is mostly due to the team's very high 5v5 save percentage -- 94.0% -- and fairly normal shooting percentage (8.0%). As we've continued to repeat in these updates, eventually Ben Bishop will have to come crashing down to Earth. That he's kept a .934 save percentage going this long has been surprising, and while there is absolutely no argument to be made that he's been anything less than phenomenal, his numbers will come down eventually, bringing the team's PDO down as well.

Fortunately for the Lightning, while their PDO suggests the team has had more than it's fair share of luck, they've also become a very good puck possession team, especially in the months following the injury to Steven Stamkos. Here's a chart of the rolling 10-game Fenwick Close % (estimating possession via unblocked shot attempts at 5v5 close): 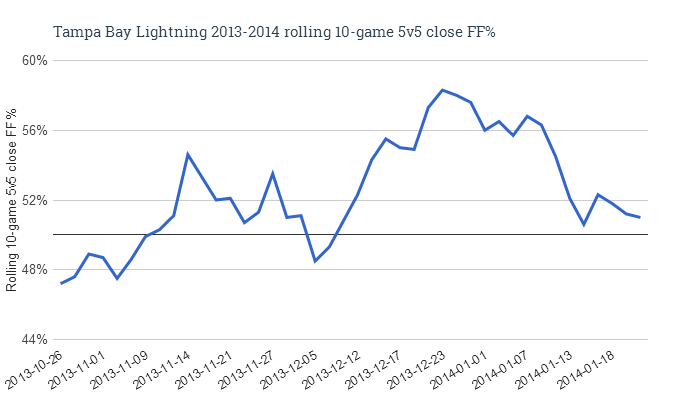 The month of December was very, very good for the Lightning. Admittedly, they've hit a little bit of a bad stretch lately, as you can see the average nearly dip below 50% for the first time since early December, but some of that is the tough schedule the Lightning have played in January and some of it is big outlier games like this one against the Carolina Hurricanes where the Bolts controlled a paltry 18.2% of all unblocked shot attempts at 5v5 Close.

The team is undoubtedly still figuring things out, but they've been a good puck possession team for over a month and should likely only continue to get better as the young forwards continue to acclimate into their roles and the schedule eases up heading into the Olympic break.

If there is one area where the Lightning still need serious improvement, it's on special teams.

While Jon Cooper and his staff have done a tremendous job re-shaping this club into a quality even strength club, the Lightning still struggle with the man advantage and are downright terrible when killing penalties.

The Bolts currently are converting on just 18.1% of their power plays, good for 19th in the league. That may not seem very good, but consider this: the Tampa Bay Lightning are dead last in shots for/60 minutes of power play team. They are literally the worst team in the entire NHL in terms of generating shots on goal on the power play. (Go ahead, cue up your "decline the power play" jokes, or your "SHOOOOOT" jokes. They're all warranted.) That the team is managing to convert on 18.0% of its power plays while taking so few shots is actually a small, hollow victory. It seems overly simplistic but if the Lightning want to score more power play goals they ought to start with more power play shots.

As has been noted in this space before, the power play isn't the only place where this is a problem; the Lightning seem absolutely reluctant to shoot the puck at all situations. It just becomes more obvious and painful to watch when they're a man up. Perhaps Steven Stamkos' return to the lineup assuages this a bit, but there seems to be a systemic problem with the Bolts in terms of shot generation on the power play (and at evens as well, where most of their gains in puck possession have come via shot suppression).

Sure, that all sounds bad, but the Bolts have been a very good team at generating offense in transition and at 5v5, so the power play struggles can be overcome. More troubling has been this team's freefall on the penalty kill. They are now killing off just 79.1% of opposing power plays (25th in the NHL) and giving up the 9th most shots per 60 minutes while shorthanded. While tactically, it is difficult to suss out just what is going wrong with the PK, but there's a problem and it is something both Jon Cooper and Rick Bowness need to address lest we see more games like last night where the Lightning are very good at 5v5 and give away a point because of special teams.

The Lightning are still riding a PDO high for now, as Ben Bishop continues to give this team elite, league-leading goaltending. It is not unreasonable to expect Bishop to regress -- perhaps down as far as league average or lower -- and that could very well be without any change in his play at all, which has been terrific all season long. But with Steven Stamkos nearing a return to the lineup in the weeks to come, a drop in on-ice save percentage can be expected to be off-set by a noticeable uptick in shooting percentage once the Lightning get the career 17.5% shooter back.

The Bolts continue to be a top-10 puck possession team in a weak conference, and if they can grind out this tough, road-heavy January schedule, they should be sitting pretty heading into the Olympic break and poised to get the game's best pure sniper back, which should also help with some of their power play issues. The most pressing concern moving forward remains maintaining a consistent, effective possession game and doing whatever it take to stay out of the penalty box and improve the penalty kill for when it's called upon.