Follow @kalexanderRC The physical Czech defenseman lands at #4 on our countdown after rocketing up the Tampa Bay Lightning's defensive depth chart over the past 18 months to claim a permanent spot in the top 4.

Radko Gudas was drafted in the 3rd round (66th overall) in the 2010 NHL Entry Draft by Tampa Bay Lightning GM Steve Yzerman.

Since that time, fans of the organization have watched Gudas rocket up the depth chart, first with two full seasons in the AHL with the then-affiliate Norfolk Admirals (including a role as a key member of the 28-game winning streak and Calder Cup-winning team), then a half season with the new affiliate (the Syracuse Crunch) and an NHL debut in the back half of the lockout-shortened 2012-2013 NHL season.

Over that time, Gudas has quickly become a fan favorite, partially for hockey reasons: good defensive positioning and instincts, poise and patience with the puck, and an old-school penchant for the lost art of the hip check. He's also received a fair amount of notoriety for his typical choice in facial hair.

Here's how our panel ranked the 23-year old Czech defenseman:

In that 22-game audition at the end of 2012-2013, Gudas demonstrated his unique skill set and translated it brilliantly to the NHL, looking every bit the seasoned veteran playing 16:59/game as the team's 5th defenseman, skating mostly with Keith Aulie but seeing some time on the 2nd pair with Matt Carle, too, in lieu of Eric Brewer. At the time, Teddy Purcell and then-head coach Guy Boucher both remarked that Gudas seemed like a multi-year NHL veteran, a testament both to his maturity as a player and to the strength of the Lightning's development at the AHL level.

His physical play, always a hallmark of his game, was also clearly a point of emphasis as he worked to carve out his spot in the Lightning line up. He recorded a ridiculous 87 hits in 22 games after that first call-up to the NHL. That's almost 4 hits per game; the league leader in hits that year was Matt Martin of the New York Islanders, and he averaged just over 4.8 hits per game in 48 contests.

That pace hasn't really slowed even as he started this season, with Jon Cooper (his formed AHL coach) now behind the bench for the Lightning and a permanent spot in the top-4 defense group alongside puck-mover Matt Carle. Gudas sports a whopping 201 hits in 53 games played (3.79 per game), and is third in the league for total hits behind the aforementioned Matt Martin and Toronto Maple Leafs defenseman Cody Franson.

While there are plenty of reasons to scoff at the use of RTSS (Real Time Scoring System) stats, they're really the only way we have to measure a player's "physical" contributions to the game. But Gudas' offers much more to the Lightning than just a physical presence; through his first 70+ games in the NHL he's been a steady, reliable defenseman that has quickly become part of head coach Jon Cooper's top pair. Gudas and his partner, Carle, are the only Lightning defensemen with a zone-start rate below 50% meaning they're the only defense pair that starts off in their own zone more than they do in the offensive zone. Compare that to the other pair in the top-4 for the Lightning -- Victor Hedman and Sami Salo -- who start more than 55% of this shifts in the offensive zone, and it's clear to see what Gudas' role is with the club.

Gudas and Carle are getting the most minutes, in the defensive zone, against the toughest competition. The below player usage chart further demonstrates that visually (image via Extra Skater): 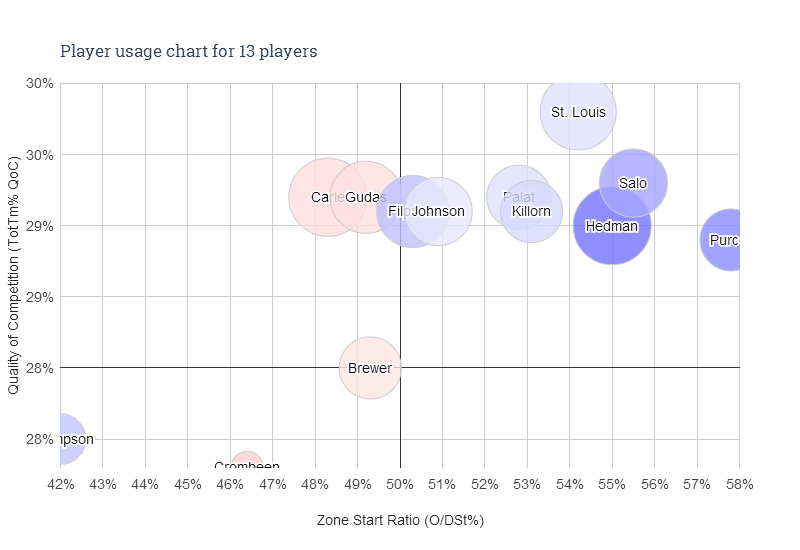 The x axis of that graph is sorted by Zone Start Ratio, and the y axis by quality of competition. The player usage chart, developed by Rob Vollman of Hockey Abstract, helps to visualize how players are being used by their coach and simultaneously how well they are performing in that role. The top-left part of your typical usage chart -- players with a high quality of competition and a lowe zone-start ratio -- are your "shutdown" players. Gudas, alongside his partner Carle, falls firmly in this part of the chart.

It is understandable then, why Gudas (and Carle) both have slightly sub-par possession numbers, as they've been the go-to pair for Cooper in any tough situation. That also helps to further clarify some visible on-ice struggles for Gudas this year as the season has progressed. Fans have become accustomed to smart, reliable, aggressive hockey from Gudas, but that was in his first 30 or so games when he was getting very easy match-ups on the bottom pair. It's possible he's starting to hit a little bit of a sophomore slump as the tough assignments keep getting sent his way, and it may take some more time for him to further adjust to even more rigorous nightly responsibility.

Moving forward, Gudas' right shot and physical presence will keep him in the top-4, likely alongside Carle, unless the Lightning make a move to acquire an NHL defenseman before the trade deadline on March 5, which is a very real possibility. In the meantime, Gudas will be representing the Czech Republic in the Sochi Olympics starting at 12PM (noon) Eastern versus Team Sweden. That game will be aired live on the USA Network.