For those of us who've watched Gudlevskis since he was drafted, yesterday's amazing game was not a surprise, but it was satisfying and wonderful. Follow @Puckologist

Share All sharing options for: Kristers Gudlevskis and the magic Olympic moment

Just as the Olympic quarterfinal game between Canada and Latvia was getting under way, Syracuse Crunch goaltending and video coach David Alexander tweeted out those four words. His "kid," Kristers Gudlevskis was starting in a surprise move by Latvia's coach Ted Nolan. It was the biggest stage of the kid's career and he'd be backstopping a team that was overmatched and underskilled. It had the potential to be a bloodbath. Here we go, indeed.

By the fifth round of the NHL draft, things are moving along pretty quickly. There aren't any more treks to the podium by executives and teenagers. There's no real television analysis anymore. Picks are announced quickly and without fanfare and the action moves on.

So does the audience, even bloggers who are meant to be covering the thing. I had certainly moved on, only checking Twitter every once in a while. After that disastrous season it was really hard for me to feign interest in teenage defensemen whose names I wouldn't need to know for years, if ever. But the Lightning took a goalie, so I was supposed to have something to say.

"What do you know about this Gudlevskis?"

Nothing. I'd never heard of him and had not one clue about him. I did what you do in the internet age, and Googled him. Found his stats, which tells you next to nothing. YouTube had some videos from the recent World Championship. Not enough to really tell much, but better than nothing.

I had nothing to offer beyond that. Raw Charge's draft coverage mentions him only in passing.

Less than 5% of goalies drafted in the 5th round play more than 50 games in the NHL in their career. It's the draft round that has most goalies taken and the lowest percentage that become real contributors. There seemed to be no pressing need to find out more about this guy, especially when we were more focused on whether Andrei Vasilevski would be coming to North America or not. And, frankly, it took me months to recover from 2012-13.

I put this apparent project goaltender out of my mind. 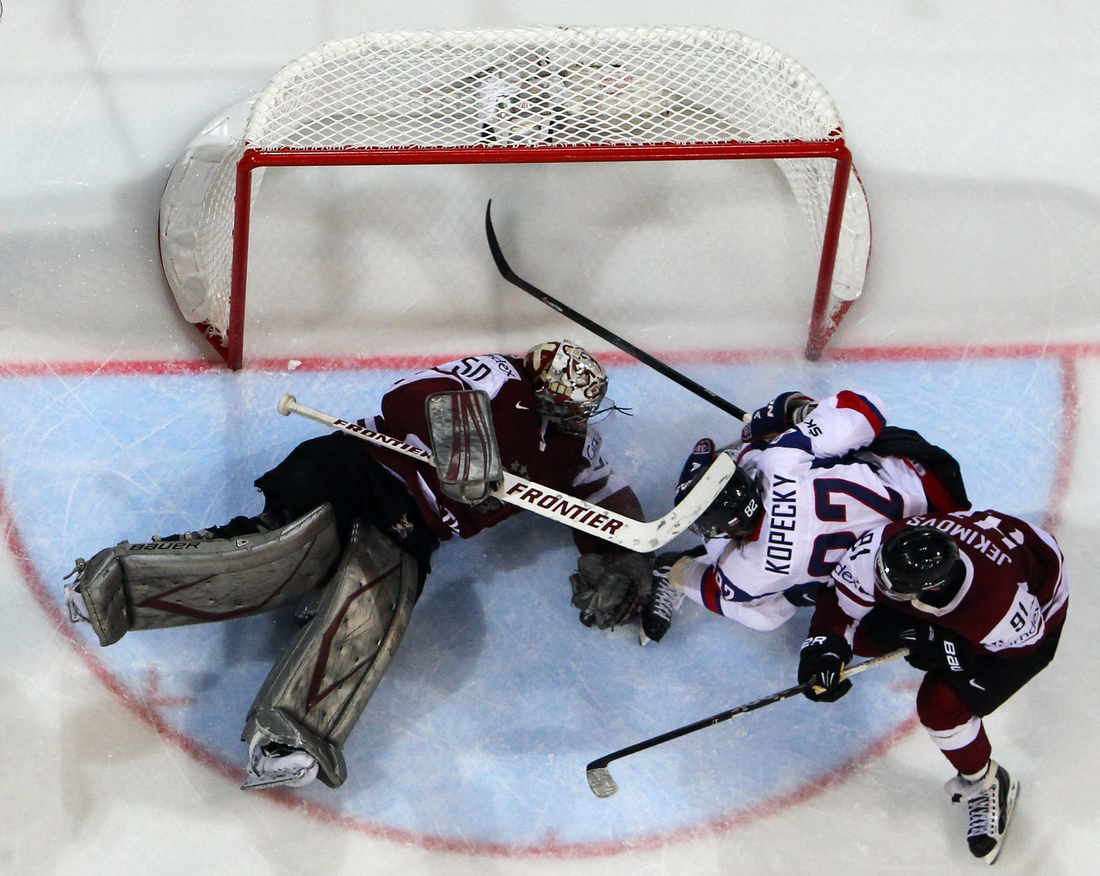 Development camp arrived and so did Kristers Gudlevskis, with his beat up pads and mask. It looked like those pads had been used for years. (It turned out they had.) We were all focused on what Vasya was doing, how Vasya looked, but word began to emerge on the goalie grapevine that this Gudlevskis kid was worth paying attention to.

As Development Camp morphed into Training Camp, the word got louder. I never get to see Lightning practices or training (#LongDistanceFanProblems), so I was going on the word leaking out from the folks who were there--plus two streamed scrimmages--but the word was exciting. This kid's good. Too good for the ECHL, where he's slotted to be. All of a sudden, the Lightning have a logjam in goal and someone could be displaced.

It didn't take long. Gudlevskis played less than a handful of games in the ECHL before getting the call in October to replace an injured Riku Helenius. And Gudlevskis's first game with the Syracuse Crunch was a shutout.

It was my first opportunity to watch him for a whole game and everything I'd heard about him seemed validated. He was incredibly poised and made few mistakes. He went from almost perfectly still to battling in nanoseconds, like he had a switch he turned on when he needed to. That stillness was eerie. He looked in complete control of that game.

He gave up four goals in his next game. Three in the one after that. The calmness, the focus--it came and went. He looked so young. But that potential was always there and the determination. It didn't take long to understand what the Lightning were getting with this guy: a young goalie settling into a new country and a new system, who had talent but not experience. He was almost pure raw material.

Gudlevskis bounced up and down between Florida and Syracuse for a few weeks and then in early December, he got a callup in the absence of any injury or movement, and we knew this one would stick. He was going to be in the AHL, where he needed to be, getting that experience and getting control over his game. And getting consistent, regular coaching from a dedicated goalie coach in David Alexander.

Despite the drama surrounding how the Lightning made this move, it was unquestionably the right move for Kristers Gudlevskis. By January 12, he was the AHL's player of the week. He made the Latvian national team for the Olympics. As much trouble as the Crunch were in, Gudlevskis was getting the chance to grow into the player the franchise felt he could be.

On January 31, when both Ben Bishop and Anders Lindback were injured, Gudlevskis and his Crunch partner Cedrick Desjardins were both called up to the NHL. Gudlevskis wasn't expected to play and he didn't, as in the end Bishop was able to go, but for the final game before the Olympic break, the kid got to dress against the Detroit Red Wings, a sort of send off for the Olympic trip, and an indication of how the team sees him as one of their own. Then it was off to Sochi, where he hoped to get into a game at some point.

It had to feel like the week was both flying and dragging. It did for me, anyway. Latvia's number one goalie Edgars Masalskis was doing phenomenally well for the team. There was no reason to try to fix what wasn't broken. Eventually, Gudlevskis got the call to play against Sweden, a hell of a team to make your Olympic debut against. And, as expected, Gudlevskis let in 5 goals, and while at least a couple were the result of defensive breakdowns, a few were his own, too.

Raw, intriguing, inexperienced. It's the same story. It was the same Gudlevskis we'd been watching for 5 months.

Latvia's head coach Ted Nolan went back to Masalskis for the qualifying round, and the team stunned the world by eliminating emerging contender Switzerland. It put them in the path of Canada and the in the eye of the world. And about two hours before that game was to begin, it was announced that Kristers Gudlevskis--talented but raw--would man the net against one of the two best teams in the world.

I thoroughly enjoyed seeing the world discover Kristers Gudlevskis yesterday. I'd been banging his drum for long enough and to watch him so completely frustrate a team stacked with some of the best players the NHL could offer was satisfying in ways that you rarely get to experience as a fan. He faced 57 shots, which is like two full games worth of work back in the AHL, and he only gave up 2 goals. He was exhausted but determined.

It was a hell of a moment for a kid who keeps surprising people. It's been a hell of year for him.

One game doesn't make a career, as Lightning Head Coach Jon Cooper reminded us, even when it's a game like that one. It was far from a perfect game. Both the goals occurred on goaltender error--the first when he fell trying to recover to his left and the other when he failed to track and square up to the 53rd shot he'd faced that day. They were the kinds of mistakes made by young and tired goalies.

He'll come home to Syracuse, not to Tampa. He'll make his way through the AHL, not the NHL, at least for the foreseeable future. He won't be in the NHL next year, either. But he will be in good hands, and his day will come. I believe that. The goal now is to find consistency, to stop the swings from giving up 4 to giving up nothing. The goal now is to grow into the goalie that we see glimpses of. It's going to be a fun ride, and a lot more fans are now taking it with him. I can't wait to see what happens.