Ryan Callahan makes the Tampa Bay Lightning different; does he make them better?

This is not an easy question to answer. Steve Yzerman didn't even try. What kind of player is Ryan Callahan? What will he add to the Tampa Bay Lightning in their final 20 games before the playoffs begin?

Share All sharing options for: Ryan Callahan makes the Tampa Bay Lightning different; does he make them better?

Setting aside the emotional trauma of losing a player like Martin St. Louis -- and given the circumstances that led to his departure -- it's tough to look at the moves made by Tampa Bay Lightning General Manager Steve Yzerman coldly and objectively.

But the Bolts are still in the thick of a race for a potentially advantageous playoff spot, and while Marty is gone, Ryan Callahan is here in his place.

Marty's skates will never be filled, by any player. Not in the hearts and minds of fans in Tampa. Asking Callahan to be St. Louis is unrealistic. But he's here now. The Lightning wanted him. They still want him. Now they have him.

The Lightning have 20 games left that have to played, with or without Marty St. Louis, and the player has decided it will be without. So be it.

So what does Callahan bring?

He's not really a scorer

Ryan Callahan was not acquired from the New York Rangers to score points.

That's a good thing, because he's not really a scorer. Since the 2010 season, in over 2500 minutes of 5v5 ice time, Callahan has scored 1.64 points/60 minutes. That's 180th in the NHL over that span of time, in Luke Adam and Ryan Jones territory. Not exactly the type of player you get excited about offensively. Callahan is not going to fill the scoresheet for the Lightning, so if you were expecting that, prepare to be disappointed. His career high for goals (29) and points (54) came in the 2011-2012 season when he scored 13 goals on the power play and managed to stay healthy for 76 out of 82 games and he's never played a full 82 game season in a seven year NHL career.

What does that all equate to?

Ultimately, Callahan is not a top-line talent. He's a quintessential "middle-6" player, capable of moving up and playing big minutes in the case of injury but not a big enough offensive threat to deserve 20+ minutes per night on the top line. He's not particularly big (5'9, 190 pounds) but he plays the kind of straight-ahead game that North American hockey fans love. You won't see Ryan Callahan swoop around the net or gliding around the perimeter in the offensive zone. He's going to muck in the corners and drive to the net, with and without the puck.

Most of his goals (of the 59 he's scored in the NHL) are scored near the blue paint. He's as close to a living, breathing hockey cliche as you'll get, and that's far from a criticism. He has an active stick on the forecheck, creating turnovers and odd-man rushes, even while shorthanded, and he has enough skill to finish the rush opportunities he does get. He's capable of playing on the power play, but isn't exactly a wizard carrying the puck. He's best used as a net-front presence, which, contrary to popular belief, is not all about size. He's shown tremendous vision from that spot with his back to the goaltender, setting effective screens and using his body well to wedge off defenders to pot rebounds and deflections. Tampa Bay already has plenty of solid zone entry forwards and half-wall playmakers, and with Ryan Malone all but useless at this point in his NHL career, it's likely that Callahan helps the power play, perhaps even on the top unit.

He's also contributed significantly more assists than goals in his career, particularly at even strength, but he's been a very consistent 10% shooter over the course of his NHL career. He has some ability to put pucks in the net if given the opportunity to take shots. His wrist shot is nothing to write home about but he'll hit the net if given a good scoring chance in the slot or around the crease and he's got decent enough hands to deke around a goaltender and tuck a shot five hole or lift it top-shelf.

But he does other stuff

His prospects as a scorer in the Tampa Bay Lightning lineup don't look terrific, but as many have pointed out since the deal to acquire him was consummated, this trade wasn't about adding points to a potent lineup that's also adding a 60-goal scorer "for free".

Intangibles, heart, grit, want-to, hits, blocked shots, compete level. These are the things you most often hear when talking about Ryan Callahan as a hockey player.

Before the trade, he was 2nd on the Rangers in hits (132) and fifth in blocked shots (47), but he's first among forwards in both categories, categories he's led the team in for three years running. His reputation as a selfless, physical hockey player precedes him, and for good reason.

The obvious caveat here is that part of the reason Callahan is able to rack up so many hits and blocked shots is because he's oftentimes defending, i.e., playing without the puck. He's not a puck possession ace and won't be a panacea to the Bolts worsening puck possession issues.

The Rangers have improved dramatically over the course of the season, almost in spite of Callahan, who sports a rather pedestrian 50.6% Corsi For at 5v5 (14th out of 18 regular skaters for the Rangers), and that's with pretty favorable usage too, starting the majority of his shifts in the offensive zone and not against particularly tough competition: 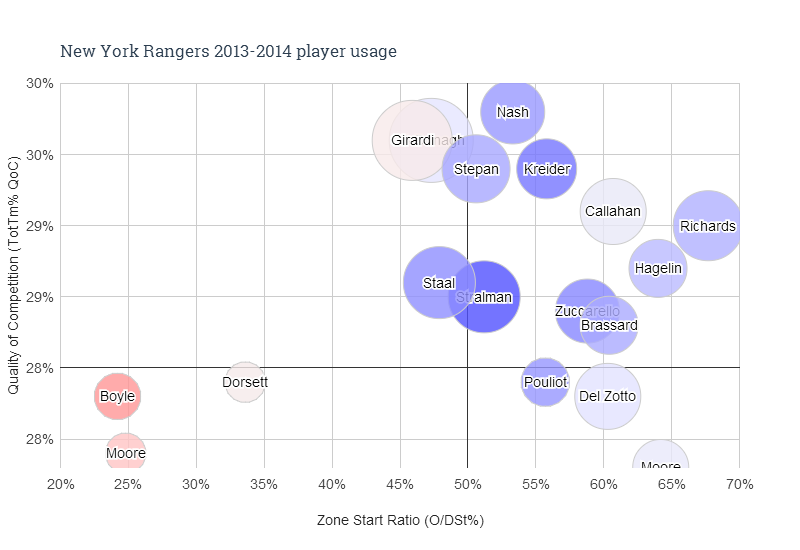 All that said, the context completely changes with Tampa Bay, so his role and his usage with New York only gives you so much information about what one can expect once Callahan steps onto the ice for the first time as a member of the Lightning.

So where does he fit in?

This is a good question, and one Jon Cooper has the distinct pleasure of figuring out.

He's a top-9 forward, no doubt, and I don't think there's any way he doesn't start off as a top-6 forward. With Martin St. Louis now in New York, the auditions for Steven Stamkos' wing spots begin in earnest, with Alex Killorn (who has played there before) and Nikita Kucherov (who has been dynamite with the puck but has struggled to finish plays) the frontrunners. Ondrej Palat might still have a chance to be the top line left winger, but that notion took a hit when St. Louis was shipped out.

The best place for Callahan will be on penalty killing unit #1, where the Bolts have been crushed all season long, giving up a ton of shots, shot attempts, and goals. While there still seems to be something tactically wrong with the kill that one forward won't fix, Callahan is certainly another reliable forward you can put out to help kill penalties, and he perhaps frees up some other players for more 5v5 minutes to create offense.

In the end, it seems like the logical place for Callahan is on the 2nd line alongside neutral zone magician Valterri Filppula, with Alex Killorn on left wing. In that scenario, Callahan essentially replaces Teddy Purcell on the second line. If Cooper feels like experimenting with Stamkos' wingers, Purcell might become a 3rd liner with Tyler Johnson as his center; or Cooper could opt to move Purcell up to the top line, as he's shown chemistry with Stamkos in the past.

Most importantly, adding Callahan gives Cooper flexibility and versatility in the lineup he didn't have before, and it gives him an excuse to tinker with combinations that haven't been working in the four games since the Olympic break.

The organization has flat out said they'd like to retain Callahan if possible, and that he's not merely a rental. That comes straight from the owner's mouth:

Statement from #tblightning owner Jeff Vinik: "We are pleased to add Ryan Callahan to our team and we hope to sign him for the long term'

The tax situation in Florida (as compared to New York City, especially) certainly helps the situation if you're looking at this from a "re-signing Callahan is a priority" point of view, which is what the Lightning seem to be doing. That will hopefully be the first step at knocking Callahan down from the 6x6+ deal he was asking Glen Sather and the Rangers for.

The next step is actually some careful strategy by Yzerman to sell Callahan on Tampa Bay as a city, a team, and a market. It doesn't appear as if any negotiations will take place towards an extension until the offseason. Yzerman is, rather smartly, letting the deep farm system and strong fanbase in Tampa speak for themselves to try and convince Callahan that Tampa Bay is a good place to be. If he wants to stay enough, theoretically his number will come down.

Whatever Callahan eventually decides, a new season, and a new era, begins now. And -- as hard as it is to say this -- I think the Lightning are better off now than they were a day ago.