The first round series between the Tampa Bay Lightning and the Montreal Canadiens begins today: so how do these two teams match-up?

After an impressive run to finish a surprisingly successful regular season, the Tampa Bay Lightning claimed 2nd place in the newly formed Atlantic Division and will face the Montreal Canadiens starting tonight with Game 1 at the Tampa Bay Times Forum.

At first glance, the regular season series between these two clubs would appear to suggest that the Bolts have the upper hand, winning three of the four contests and dropping a lone decision 2-1 in the shootout in late December.

Let's dig deeper to see just who has the upper hand.

The Lightning had a clear advantage over the Habs this season in terms of both their overall and head-to-head 5v5 puck possession game. By almost every significant puck possession metric, the Lightning were the better squad in 2013-14 (all data is 5v5 Close, pulled from Extra Skater and Bolt Statistics):

It's fair to point out that the Habs have been riding a nice PDO wave this season, at least at 5v5, where their average shooting percentage (8.0%, 12th in the NHL) coupled with the superb play of Carey Price in net (team save percentage of .935, 3rd in the league behind just the Boston Bruins and Colorado Avalanche) has seen them overcome a mediocre-at-best ability to control the puck at even strength: 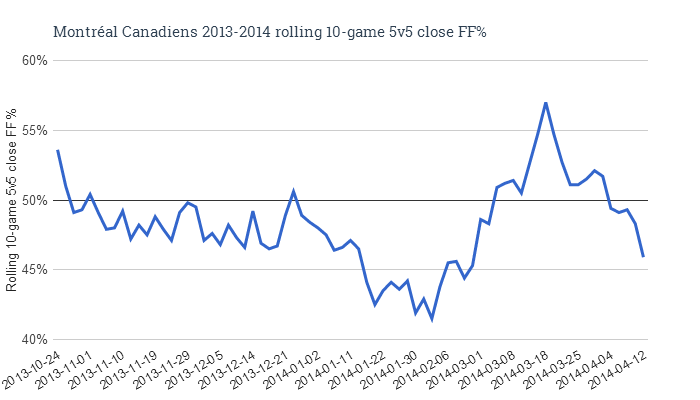 As we can see, the Habs played perhaps their best 5v5 hockey of the year following the Olympic break, improving every game from the end of February through a March 18 win over the Avalanche at home. The Habs cratered soon after that, losing some key games to division opponents (including a 3-1 win for the Bolts over the Habs on April 1) beforing phoning in losses to the New York Rangers and New York Islanders that saw them drop back under 50% Fenwick and allowed the Lightning to steal home ice in this series.

Contrast that with the path of the Lightning this year: 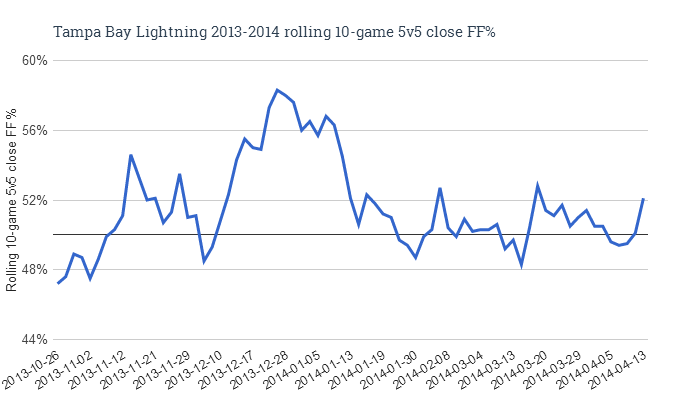 Unlike the Habs, the Bolts sputtered a bit coming out of the Olympic break, but stabilized in their final games of the season and remained a "plus" possession team throughout the year, rarely dipping below 50% and when doing so not staying down for very long.

In four head-to-head match-ups, the Lightning controlled 56.46% of all shot attempts at 5v5 Close, improving on their season numbers and really dominating the play at evens against their division rivals.

In spite of these numbers, there is not really a significant talent gap between these two teams. The biggest difference for the chasm between them in terms of puck possession can be most easily attributed to coaching and player usage, areas where Jon Cooper has been a wizard and Michel Therrien slightly less than helpful to his talented team. That highlights the importance of Tampa Bay claiming home ice, where Cooper will get to operate with the last change, keeping Steven Stamkos away from P.K. Subban and exploiting the Habs' 4th line and bottom defense pairing whenever Therrien decides to put them out on the ice.

Both teams feature top-flight offensive talent flanked by quality scoring depth. Steven Stamkos is the best sniper in the game right now and still finished the season on a 55-goal/82 game pace after missing more than half the season to a broken leg sustained on November 11 against the Boston Bruins. But the Habs answer with Max Pacioretty, one of the best goal scorers in the league this season, and Thomas Vanek, who is no slouch himself and is also a notorious Lightning-killer from his days with the Buffalo Sabres.

The raw team numbers give a slight edge to the Bolts (stats from all game states) :

The Lightning have unquestionably been the better team in terms of generating shots on goal and putting pucks into the net. They take more shots, score on more shots, and as a result, score more goals. Pretty simple math, really.

The Bolts are paced by Steven Stamkos and Valterri Filppula with 25 goals each, then a pair of Calder hopefuls in Tyler Johnson and Ondrej Palat (24 goals and 23 goals, respectively). They've had contributions from throughout the lineup with 8 total 10+ goal scorers currently on the roster but there's no doubt that scoring goals this year for Tampa Bay has been a team effort. No one comes close on either team to Max Pacioretty, who potted 39, and the Habs have 9 double digit goal scorers of their own (though Alex Galchenyuk won't play in the first round due to injury).

Barring any last minute tactical adjustments, Michel Therrien will run these lines versus the Bolts:

Checking opposing top lines will be key in this series -- if the Bolts can stop the Pacioretty line better than the Habs counter the Stamkos unit, that will be a major advantage to Tampa Bay.

Again, an area where the teams match-up quite evenly, with a legitimate stud #1 blueliner (Victor Hedman and P.K. Subban), a solid-if-unspectacular top-4 group, and decent depth on the blue line. They also each feature a quality shutdown forward line that will be tasked with stopping the top offensive units noted above.

If those assignments hold true, Bolts fans salivating at the opportunity for Nikita Kucherov to get ice time against Douglas Murray will have to politely wipe their mouths, as the Habs opt for more mobility and speed on their back end against a fast Lightning forward group. Bouillon/Weaver is exponentially better than any bottom pairing that features Murray, and it negates some of the presumed speed advantage the Lightning might have otherwise had, particularly in transition.

The forwards that project to get the hardest assignments for Montreal are Tomas Plekanec and Brian Gionta, who have been outstanding in a shutdown role, gobbling up tough minutes and opposing forwards. For Tampa Bay, those responsibilities will likely fall to Valterri Filppula and his wingers: most often, Ryan Callahan and Ondrej Palat, a trio that has excelled in tough minutes down the stretch, so much so that Ondrej Palat is even drawing Selke Trophy consideration from major media outlets.

By now you're undoubtedly wondering why this is even a series at all, why they bother playing the games, why anyone is worried about the Lightning getting through the first round of the playoffs and if the Habs should just concede now and not waste everyone's time.

You're not wondering that?

That's probably because you saw what was coming in these next two sections -- the Habs do have some distinct advantages over the Lightning in a few key areas, and special teams is absolutely one of them. First, as always, the raw numbers:

There's no sugarcoating this -- while the Lightning have a significant 5v5 advantage, the special teams go to the Habs, or they did in the regular season. Montreal generates 15 more total shot attempts per 60 minutes of 5v4 time and allows 5 less attempts per 60 minutes on the kill. That helps explain their percentages, though the Bolts make up for the lack of attempts by converting on a higher percentage of them (thanks to players like Steven Stamkos and, formerly, Martin St. Louis).

The bottom line is that to be successful versus the Habs the Lightning simply must make it primarily a 5v5 series. If special teams plays a big part that's good news for Montreal.

If Tampa Bay goaltender Ben Bishop were healthy, this category might come down to a draw. Bishop played in all four games during the regular season against the Habs, but has already been ruled out for Game 1. That means Anders Lindback will almost certainly start in his stead, and despite his hot run to end the season, there's little reason to think the Lightning are on even footing with the Habs when it comes to goaltending:

Price is better overall and at 5v5, and not by a small margin. He's had a fantastic regular season and was lights out in the Sochi Winter Olympics, too, winning a gold medal with Team Canada. If the Lightning are going to beat the Habs, the forwards have to find a way to score on Price, who was phenomenal in four games against the Lightning this year, bailing the skaters in front of him out at every turn.

Lindback's overall numbers are skewed by a small-ish sample size and some bad showings on the penalty kill, as his 5v5 save percentage is a respectable .914.

Home ice will be huge for Jon Cooper to get the match-ups he wants in up to four games out of a potential seven. This advantage cannot be overstated when you're facing a coach with puzzling usage like Michel Therrien.

On top of that, the 5v5 puck possession advantage is evident. The Lightning should dominate control of the puck, and the Habs will rely on transition offense and their power play to generate most of their offense. Don't expect to see too many long forays into the Lightning end as the Bolts work not to give up the puck and to make the Habs defend in their end for long stretches to wear them down and make Carey Price move around in his net.

How the Bolts attack Price will be the key to this series. If he plays as well as he's capable of, he could potentially close the 5v5 possession gap and give his team a chance to win the series. The Lightning will need to be patient and consistent in their offensive efforts in order to beat him and win this series.