Ryan Callahan: Making a case for the Tampa Bay Lightning to let him walk

The 29-year old wing impressed in a short stint with the Tampa Bay Lightning (no-show in the playoffs notwithstanding), but is re-signing him really the best thing for the club moving forward?
Follow @kalexanderRC

Share All sharing options for: Ryan Callahan: Making a case for the Tampa Bay Lightning to let him walk

It's no secret that the Tampa Bay Lightning would like to re-sign former New York Ranger captain Ryan Callahan as soon as possible.

Shortly after the trade, GM Steve Yzerman made it clear that he wanted Callahan back, but that he'd wait until after the season to begin negotiations:

The pending UFA's agent, the veteran Steve Bartlett, told ESPN.com Tuesday that he chatted with Steve Yzerman in Buffalo over the past weekend, at which point the Bolts GM made it clear they'd like to talk extension after the season.

Yzerman, also reached Tuesday, said for now the focus is on hockey, on making the playoffs and on doing well in the playoffs. The GM will focus on Callahan's future later.

"He's just going to play hockey and we'll talk when the season's over," Yzerman told ESPN.com.

Head coach Jon Cooper upped the ante after the first round sweep at the hands of the Montreal Canadiens:

"I really, really hope Ryan considers us as a place he wants to spend the rest of his career," said Cooper, "because as long as I'm coaching this team, I want Ryan Callahan on the bench. I don't know how much stronger I can be about that."

So the Lightning do want him. There's no doubt about that.

At first glance, Ryan Callahan is exactly the type of "prime-aged" player you'd think any NHL club would be ecstatic to add to their roster for then next four or five years. He's on the "right side of 30", with over 8 years in the league and 450 games played.

But recent research done into player aging contends that the "prime age" (at least in terms of scoring) is actually younger than we have assumed -- somewhere in the mid-to-late twenties. After that, nearly every player in the NHL goes into a demonstrable scoring decline until they eventually retire. There are, of course, always outliers (Martin St. Louis comes to mind as a player who has defined every aging curve imaginable) but those are exceptions to general trends. Besides, can we really bet on the small percent chance that Ryan Callahan will be as physically fit and mentally determined as Martin St. Louis has been well into his 30s?

Not-so-recent research as far back as 2010 showed that the "peak" years for most NHL forwards was somewhere in the mid 20s. If that's the case, then Callahan is already well past his scoring prime and will only decline for the length of any UFA contract he signs on July 1, be it with the Lightning or any other team.

The more this topic is studied, the more it looks like investing heavily in UFA players typically around Callahan's age is actually a poor use of assets. A hypothetical 6-year deal for Callahan would see him with the Lightning through the 2019-2020 season (!!!) as 35-year old. Callahan, who in 8 years in part due to his aggressive and relentless style, has yet to play a full 82-game season in the NHL and has likely already had the best scoring season of his career with 54 points in 76 games in 2011-2012. What's worse, he's likely to score less and less until that age-35 season:

Callahan is right on the cusp for where most players start to dramatically decline in scoring. And while scoring is the easiest way to statistically demonstrate player decline, it's likely that his non-scoring skills will deteriorate at a similar, if unquantifiable, rate.

Speaking of scoring, while that's not what Callahan has been asked to do in his career, it's worth noting as a player looking to get upwards of 5 million dollars per season -- perhaps even more than 6 million (nearly 9% of the projected salary cap total). 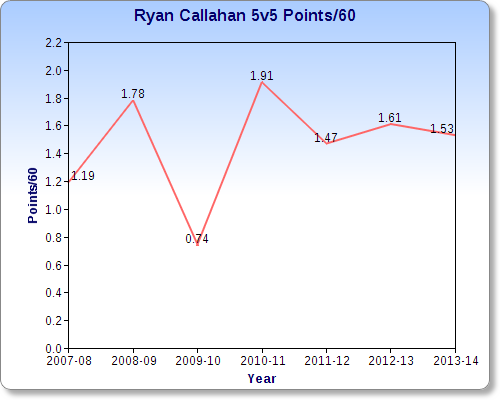 Outside of his 2009-10 season which was derailed by injury, Callahan has been a pretty steady 1.50 point/60 minutes guy, which is fine. He's contributing on offense at even strength.

But let's give that number some context: 1.53 points/60 in 2013-14 was good for 177th in the NHL this year. There were 176 skaters that scored at a better rate at even strength than Callahan did this year. With 30 NHL teams and 3 players per line, that makes him a fringe second-liner in terms of scoring ability (90 first liners, 90 second liners means the top ~180 or so players are "top sixers").

He's firmly in Justin Abdelkader/Gabriel Bourque/David Legwand territory in terms of scoring; other players that aren't "offense-first" and are expected to contribute things like grit, toughness, and two-way play. For comparison's sake, Abdelkader is making $1.8 million; Bourque, $775,000; and Legwand, $4.5 million on a deal signed in 2008.

So why are Callahan's intangibles worth more against the cap than any of these guys?

There's no doubt that Callahan does a lot of things quite well on the ice. He's a very good hockey player.

His style as a player has been lauded by fans, media, teammates and coaches for whomever he's played with, and rightfully so. He plays a fast, straight-ahead game, is good in the corners and around the net and plays a simple and smart game in all three zones. He's a useful penalty killer and by all accounts both "good in the room" and "coachable", buzz-phrases that are hard to evaluate but are certainly good to hear about anyone you might potentially sign to a long-term contract.

The bottom line, however, is that Callahan's skillset is secondary; he's a complementary player. The things he does well don't really lead to a lot of scoring or particularly impressive possession stats, making signing him to a long-term deal seem less and less like a good idea.

For whatever reason, Callahan's abilities don't seem to translate into good possession numbers. (Following figures are from Extra Skater). In 20 regular season games with the Bolts, he was a 51.0% Corsi player, with a Corsi Rel of -1.3%, meaning the Lightning had a 1.3% better share of all shot attempts when Callahan was not on the ice. Some of the positive opinions towards Callahan undoubtedly came from his bloated +20.9% Goals For Rel with the Lightning in the regular season. His 106.2 PDO (on-ice shooting percentage + on-ice save percentage) was surpassed only by Mike Kostka's 106.6. The Lightning took about half of the shot attempts with Callahan on the ice but, mostly through luck, scored an absurd 72.2% of the goals.

Ultimately, as all things do in the business that is NHL hockey, this decision comes down to money. Even with the cap expected to go up to somewhere around 68 million (a little less than the 71 million reported in December, due to a downturn by the Canadian dollar), Ryan Callahan's hinted-at contract demands make any potential deal to retain the veteran winger at best, shortsighted; and at worst, plain foolish.

In a salary cap NHL, it's unwise to commit so much to a player who will not contribute a substantial amount of points or puck possession ability and is likely to decline severely over the course of the deal he signs.