Raw Charge's salute to the Lightning's history by looking at some of the players to wear the numbers continues with. #12, center John Cullen.
Follow @ClarkBrooks

Share All sharing options for: The Sweater Series (or Notable Numbers): #12 John Cullen

Way back in 1944, Ella Fitzgerald and the Ink Spots sang "Into Each Life Some Rain Must Fall". Somewhere along the way, it was silently declared that Into the Lives of Each Sports Franchise and the Fans Who Follow Them Some Personal Tragedy That Has Nothing To Do With the Game Must Fall. The Tampa Bay Lightning and their fans were introduced to that axiom when center John Cullen was diagnosed with cancer.

After a stellar career at Boston University, where he remains the school's all-time scoring leader, Cullen was drafted by the Buffalo Sabres in the 1986 Supplemental Draft but was not offered a contract. He signed with the Flint Spirits of the International Hockey League where he led the league in scoring and was named the league's Rookie of the Year and Most Valuable Player for the 1987-88 season. Following that season, he was signed by the Pittsburgh Penguins and later moved on to the Hartford Whalers, Toronto Maple Leafs and a brief return to Pittsburgh before signing with the Lightning as a free agent prior to the 1995-96 season. He would go on to play a total of 150 games where he tallied 34 goals and 71 assists. As a member of the first Lightning team to make the playoffs (95-96), he posted 3 goals and 3 assists in the five games the team played against the Philadelphia Flyers.

During the 1996-97 season, an x-ray revealed a baseball-sized tumor in Cullen's chest and he was diagnosed with Non-Hodgkin lymphoma, ending his year on the ice. He immediately began an aggressive chemotherapy regimen and by the following September, the tumor was gone and he prepared to resume his career with the Lightning. However, a precautionary screen prior to training camp revealed that he still had cancer cells in his body. He missed the entire 1997-98 season, during which the Lightning wore a patch featuring a #12 on a green four-leaf clover in Cullen's honor. Pins with that emblem were given to fans attending home games. 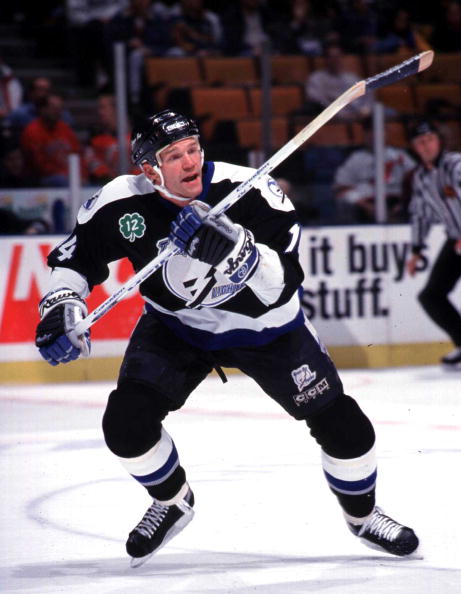 At one point during his treatment, he went into cardiac arrest and had to be revived with a defibrillator. He later underwent a bone marrow transplant. An exam in April of 1998 revealed that the disease was finally completely gone and Cullen started to train for a comeback. He played his first game in almost 18 months, an exhibition between the Lightning and Sabres in Innsbruck, Austria, where he scored the winning goal in the 3-1 Lightning victory. He made the Lightning's opening roster and was greeted with a standing ovation by Lightning fans at the home opener. He skated in four of the team's first eight games but was sent to the team's minor league affiliate in Cleveland of the IHL for strength and conditioning. While there, he recorded seven points in a 7-3 win over the Chicago Wolves. However, after six games, Cullen suffered a bout with bronchitis and he feared his cancer had returned. Tests were negative but out of concern for his family, he announced his retirement on November 28, 1998 and accepted the Lightning's offer to stay on with the team as an assistant coach. He was awarded the NHL's Bill Masterson Award for dedication and perseverance in 1999 and the IHL renamed their Comeback of the Year Award the John Cullen Award. The NHL launched its "Hockey Fights Cancer" initiative in 1998.

Today, Cullen lives near Atlanta with his wife and daughter. His legacy with the Lightning as somebody who fought cancer and won remains as the first time the team and its fans united in a cause outside of and bigger than anything that happens on the ice.

(Others to wear the #12 include Jock Collander, Jim Cummins, Ryan Malone and Simon Gagne)