The Raw Charge staff begins our review of the 2013-14 Lightning season with a look at what went right and what went wrong for the team as a whole.

It's been a tumultuous season for the Lightning. A lot of the off-ice drama has overshadowed the on-ice progress the team has made, but that should be noted as well. They ended the regular season with at 46-27-9 record and 101 points, good for second in the Atlantic Division and third in the Eastern Conference. The Lightning's return to the playoffs didn't go as well as anyone wanted, but for a team that was in 14th place the season before, a return at all is remarkable.

They accomplished all of this without Steven Stamkos for more than half the season and without Martin St. Louis for the stretch run. They did it with sixteen players in either their first or second NHL season. It wasn't perfect by any means, but it was a hell of a run.

This season will officially come to a close in a week, on June 30. But before we get too far into trade and free agency speculation, it's time for Raw Charge to take a look back at what went right and what went wrong for both the team as a whole and the players. We'll start with an overview of good and bad of the team's stats and then, over the next two and a half weeks break down the season for the players.

But that's getting ahead of ourselves. First, at the team level:

Possession is trending in the right direction. It was significantly better in 2013-14 than it was in 2012-13. It is important to realize that over the previous two seasons (2011-12 and 2012-13), possession was bad and sinking. But the improvement this past season was notable.

Note: Score-adjusted Fenwick has the benefit of a larger set of data, weighted for how much time the team spent in various score situations (Up-1, Down-2, etc.) It allows us to use all 5v5 data and still take into account the fact that teams that are behind attempt more shots.

What we're seeing here is both better shot generation (an increase of 5 on-goal or missed shot attempts per 60 minutes of 5v5 play with the score close) and better shot suppression (a decrease of 6 on-goal or missed attempts per 60). This goes along with what we saw from Jon Cooper's AHL teams, who generally dominated the shot count. It's not surprising that this carried over, considering that the top players on Cooper's AHL teams have almost all made it to Cooper's NHL team.

The Lightning's possession record wasn't always great, however, and it was probably a lack of possession that doomed the Lightning in the playoffs. While overall, the Lightning were at nearly 52%, much of those gains came during a specific period between November and January. Over the last half of the season, the Lightning hovered closer to 50%. 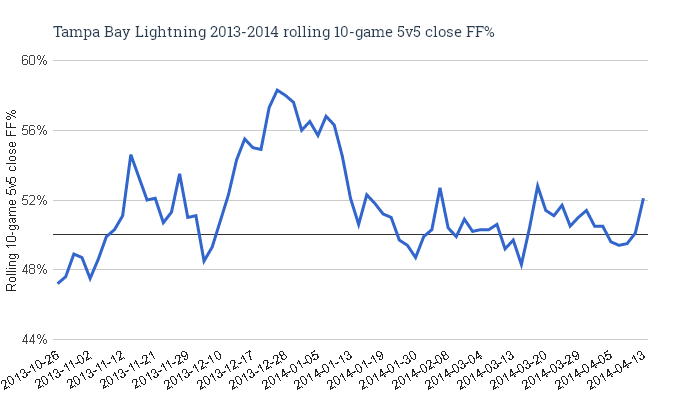 There is no guarantee that the Lightning will be able to maintain a level of possession above 50% next season. And if the Lightning want to be an elite team, they will actually need to do better in this department. But, despite all those caveats, possession at 5 on 5 was definitely a strength for a good portion of the season.

Ben Bishop had the best year of his career so far. It was, overall, an incredible performance that got Bishop mentioned as a candidate for the US Olympic team (he didn't get that honor) and earned him a Vezina nomination.

As with possession, however, the gains weren't even throughout the season. Most of the extraordinary numbers for Bishop occurred before his wrist injury in January. He had simply done so well in the early going that his injury-deflated performances in the rest of the season didn't make a large dent in his overall season statistics. Before the break, Bishop had a .933 overall save percentage; after the break, it was a .904.

That's not to blame Bishop for the post-injury decrease. It's simply a reminder that we are looking at about two-thirds of a season's worth of data. About 44 games. In terms of goaltending numbers, that's not enough for the bumps to even out. It's to be expected that there will be some regression towards league averages, even if the technical improvements to Bishop's game since 2011-12 are real. Over the past five years, only 4 goalies have maintained a save percentage above .930. Two of those were Tim Thomas and Tuukka Rask (no coincidence that both played for the Boston Bruins), another was Henrik Lundqvist, and the fourth was a guy with only 61 NHL games.

In other words, even if Bishop has blossomed into a very good goaltender at an age much later than we normally see such improvement, it's much more likely to see a drop in his numbers in the coming season than to see him maintain that level of results.

Special Teams remain an issue for the Lightning, especially the PK.

After improving between 2011-12 and 2012-13, they've stagnated since then. On the penalty kill, the team's 80.7% was relatively less effective compared to the competition than their 80.6% rate was in the previous season.

Fans noted that the team at times struggled to generate anything even with the man advantage, and their 86.8% FF rate was in fact in the bottom third of the league (21st). But so was their possession when a man down (11.2 FF%, 21st). In essence, the team was worse than 20 other teams at generating chances on the power play plus they were worse than 20 other teams at preventing chances when on the penalty kill.

Lindbäck's season has been fodder for much shouting, name-calling, and eye-rolling across the Boltosphere. But there's no getting around the fact that he did not do well this past season and that it cost games. No matter what way it gets done, it's an area that needs to be addressed. Because as much as some might like it if the Lightning's very solid starter were to play ALL THE GAMEZ, he can't. No one can. And having a solid backup isn't a luxury; it's a borderline necessity, especially for a team that has aspirations of not being swept in the first round of the playoffs. (Too soon?)

The Lightning had 27 skaters and 2 goalies who played more than 10 games. Join us this week and next as we examine how the individual players met the expectations we had for them going into the season. We will begin looking at the wingers on Wednesday, examining what went right, what went wrong, and what we might expect in the upcoming season.