The Raw Charge staff continues out review of the 2013-14 season with player grades for the first set of blue liners.

The year-end player grades and review series continues with the first set of defensemen that took the ice for the Tampa Bay Lightning in 2013-14. Catch up on previous entries, too: introduction, wingers part 1 and part 2, and centers part 1 and part 2.

What we thought would happen: After some ups and downs in the lockout-shortened 2012-13 season, his first after signing a 6-year deal with the Bolts the summer previous, we thought we might see the "real Matt Carle" that we just hadn't seen yet in Tampa Bay. Slotting on the second pair likely with up-and-comer Radko Gudas would give Carle a physical, crease-clearing partner that would free him up to activate and move the puck offensively and get back to being the defenseman that looked so good next to Chris Pronger with the Philadelphia Flyers.

What really happened: Carle and Gudas were a mess. Like, really, it was bad. And Carle was worse than his second-year partner: 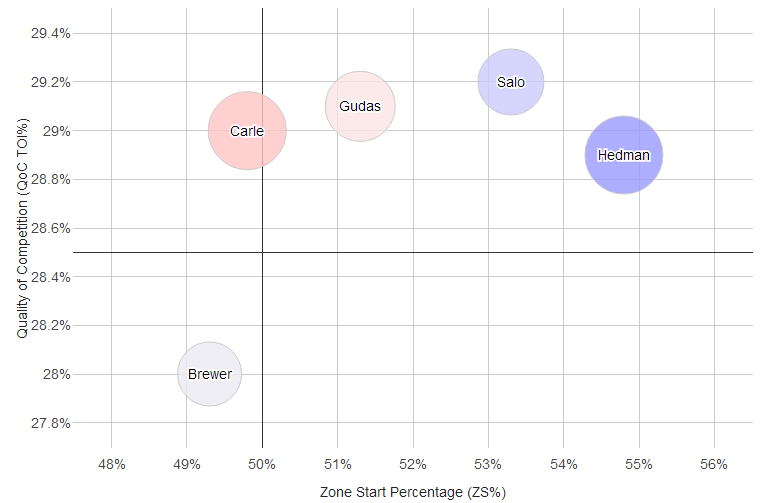 Carle did face fairly tough competition and was used more in the defensive zone, which is puzzling considering his history as more of an offensive guy. Head coach Jon Cooper seemed insistent at times in using Carle as a shutdown defenseman, which just doesn't suit his skillset very well. The results showed it -- the Lightning controlled just 47.8% of all shot attempts with Carle on the ice, the worst among regular Lightning blue-liners by a healthy margin.

Ben Bishop's outstanding goaltending helped keep Carle above water in terms of goal-based metrics (he ended up +11) and he was able to crack 30 points (with just 7 scored on the power play), so it wasn't all bad.

What might happen next season: The Lightning certainly identified the blue line as a point of weakness. Steve Yzerman made it a priority, first shipping away a draft pick to acquire Jason Garrison from the Vancouver Canucks and then landing New York Rangers break-out blue liner Anton Stralman on July 1. Playing with either one or the other should certainly help Carle's overall game, and there's a long summer and training camp to figure out some new chemistry on the blue line. That will hopefully get Carle into a groove we just haven't seen since he put a Lightning sweater on for the second time in his career.

What we thought would happen: The ascension of Radko Gudas would push the stable, physical veteran down to the third pairing, where he wouldn't be so exposed against opposing team's top lines. He'd remain an important penalty-killer and veteran defender.

What really happened: Pretty much as expected, but with some unexpectedly positive consequences for Brewer in particular. He slid down to the third pairing as the #5 defenseman, with a significantly reduced 5v5 role and continued minutes on the penalty killing unit. But, while Radko Gudas and Matt Carle struggled, Brewer was solid with fewer, easier minutes. He played most with Mark Barberio but also logged significant time with both Andrej Sustr and Mike Kostka, was an even possession player, logged the second-most amount of time per game on the penalty kill, and chipped in 17 points.

What might happen next season: Carrying young, green defensemen like Sustr and Barberio is probably asking too much of Brewer, even in sheltered minutes. But the aforementioned adds on defense should theoretically push Gudas down with Brewer, which could be a very solid, physical third unit. They'll have some issues with foot-speed, but in just over 100 5v5 minutes together last year they were a plus-possession pairing and were better together than they were apart. 2014-15 will also be the final year of a contract extension signed after the playoff run in 2011.

What we thought would happen: Victor Hedman, heading into another season with Sami Salo strapped to him with a baby bjorn, would nevertheless continue his emergence as a dominant 5v5 scoring and possession defender as Jon Cooper grew to trust his #1 defenseman more.

What really happened: That happened, but not even the most optimistic of projections could have seen this breakthrough season coming. Hedman was an elite two-way defenseman for the Lightning, the best at driving play, the best 5v5 scorer, and by the end of the year, a huge part of both the top power play and penalty kill units. (but shhhhhh!, nobody tell Team Sweden). In short, while the Chris Pronger comparisons from his draft year are still a bit lofty, he became the type of legitimate stud defender that Stanley Cup-contending teams simply must have.

What might happen next season: It's unclear if it will happen, but what should happen is either Jason Garrison or Anton Stralman gets paired with number 77 and the new duo wreaks havoc on the Eastern Conference. In either an a more two-way, shutdown role, matching up against top lines and winning tough battles; or in an offensive role, where Hedman's offensive skills can really shine. In either case, if he Hedman remains a big presence on the top power play unit, he's a serious threat to rack up enough points to challenge for a Norris Trophy in 2014-15 (after scoring 55 in 75 games last year).

What we thought would happen: Gudas impressed as a physical presence on the third pairing in 2012-13, mostly playing with Keith Aulie. He racked up 38 penalty minutes, 87 hits, and 21 blocked shots in just 22 games in that season, but perhaps most impressive was his play with the puck. He's more fleet of foot than your typical blue line bruiser and has some ability to make good break-out passes and plays through the neutral zone. Expanding his 5v5 role and, perhaps, slotting permanently in the top-4 with Matt Carle seemed like a real possibility for the young Czech defenseman.

What really happened: He moved up to the top-4 alright, but that meteoric rise was probably a little too fast for the 23-year old, even with a good amount of AHL experience. Gudas looked in over his head at times, and while he still brings an aggressive, physical element to the back-end for the Lightning, he was more ineffective in terms of puck management than he had been the year before. And while he'll always be a player that doesn't back down from confrontation, a little bit more discipline wouldn't exactly hurt -- he was -19 in penalty differential last year, worst on the Lightning.

What might happen next season: Easier minutes on the third pairing should be a blessing for Gudas, who will hopefully get back to the flashes of brilliance he showed in 22 games as a #5-6 in his rookie year. He'll continue to play a big role on the penalty kill, and with B.J. Crombeen and Ryan Malone both gone, will likely carry the load for the Bolts in terms of fisticuffs.

What we thought would happen: Salo's footspeed has been gone for years, but heading into the final year of a two-year contract signed in the summer of 2012, his good instincts and positioning seemed like they'd be enough to squeeze one more quality year out of the Finn before younger solutions on the blue line were ready for full-time NHL duty. There was also the worry of a long-term Salo injury, given that inevitability had so far been avoided.

What really happened: Salo stayed healthy and was serviceable alongside Victor Hedman (of course, not many guys wouldn't be). He chipped in just 17 points (just 6 on the power play, all assists), which was underwhelming considering part of his appeal when he was signed was the big slap shot on the man advantage.

What might happen next season: Salo is an unrestricted free agent. At 40 years old by the time the 2014-15 season begins, his NHL career may be over, though someone may take a chance on him with a 1-year deal before the season starts. In any case, his time with the Lightning is almost certainly over.