The talented Russian center takes a little tumble down our rankings from a season ago in spite of a very good sophomore season in the AHL with the Syracuse Crunch.

Share All sharing options for: Top 25 Under 25: #14 Vladislav Namestnikov

After being drafted in the 1st round (27th overall) by the Tampa Bay Lightning in 2011, Vlad Namestnikov has followed a prototypical path through the organizational ranks for a 1st round pick. A strong final season in the CHL was followed by a good-but-not-great rookie campaign as a 20-year-old AHLer and rookie pro; that was in turn followed by this past season, one where he stepped into a bigger role with the Syracuse Crunch as a leader and top scorer amid some inconsistency and adversity.

Here's how the panel ranked Namestnikov:

Surprisingly, I came in highest on Namestnikov, and was the only ranker to move him up from a season ago following his efforts in the 2013-14 campaign, where he posted 19 goals and 29 assists for 48 points in 56 games (0.85 PPG).

A broken hand early on in the season derailed what otherwise was a superb start for the Crunch's top unit with Namestnikov centering J.T. Brown and Nikita Kucherov; by the time Vladdy was healed and back skating with the Crunch, the Lightning had already recalled his two linemates to help offset the loss of Steven Stamkos to a broken leg. He was leaned on heavily to produce offense for a goal-starved Syracuse Crunch squad that outscored only 7 AHL teams over the course of the season. The team as a whole failed to crack even 200 total goals scored.

Our Allokago chimes in with her thoughts on Vladdy's year:

If there was one player on Syracuse's roster this past season that could make a fairly seamless transition to the NHL right this moment, it would be Vladislav Namestnikov. Despite being out for more than a month with a broken hand suffered at the end of November, his development occurred in leaps and bounds. His speed, tenacity and dedication impressed Crunch fans all season. He was definitely one of the bright spots.

Namestnikov finished the season third on the team in scoring with 48 points (19-29). He was an irreplaceable part of Syracuse's top line, something that became painfully clear during the Crunch's two-win December. With Namestnikov out and forwards JT Brown and Nikita Kucherov recalled to Tampa Bay, the Crunch struggled mightily to win games. When Namestnikov returned, the ship righted a bit, although there just wasn't enough firepower on the rest of the roster to save Syracuse's post-season hopes.

Vladdy was everything you ask out of a 1st line center: offensively creative, defensively sound, and capable of logging big minutes. He won nightly battles against the best defense pairs the AHL has to offer and handled the physicality and grind of the long season well. Even the hand injury which sidelined him for a good chunk of games in November/December was a fluke more than anything, sustained after a shot hit him in the hand during a game against the Hamilton Bulldogs at the Bell Centre. He was dangerous on the power play (with 7 man-advantage goals) and, generally speaking, was the go-to guy for offense on a club that seriously lacked it.

Rob Zettler tended to roll his forward lines fairly evenly, but he leaned on Namestnikov heavily when he was in the line-up. While the AHL doesn't track time on ice officially, we can use Josh Weissbock's system of estimating AHL time on ice to see that Vladdy was undoubtedly the top dog for the Crunch, averaging the most time on ice of any Syracuse Crunch regular: 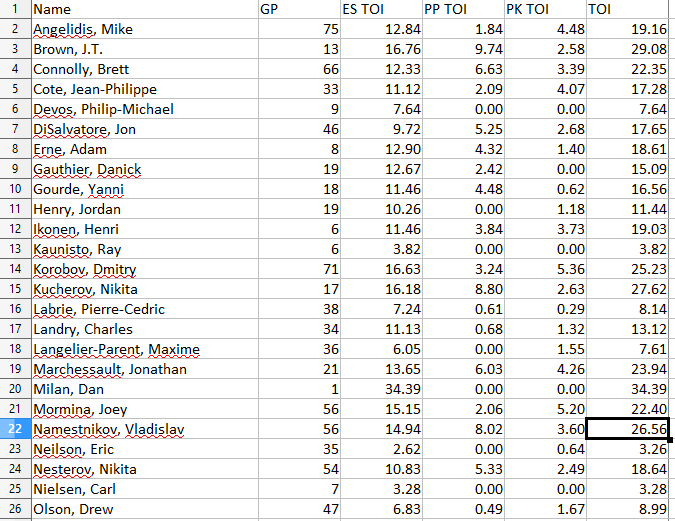 But, if everything is going so swimmingly, why hasn't this first round draft pick cracked the NHL full-time yet?

At this point, Namestnikov is merely a victim of depth; he was briefly called up in February due to an injury to center Valtteri Filppula, but appeared in just 4 games with no points. With Steven Stamkos, Tyler Johnson, Valtteri Filppula, and Brian Boyle ahead of him on the NHL depth chart, a spot with the big club this fall seems again to be out of the question; the team is simply loaded at nearly every forward position and it's hard to see a spot where he fits in right now.

That's not to say he's not still a highly-regarded prospect -- he absolutely is -- but he's still waiver-exempt, so he'll most likely start the year with the Crunch again, and again be asked to be the focal point of Syracuse's top unit.

Namestnikov signed his entry-level contract in March of 2012, so his three-year ELC will expire after this season, and he will become a restricted-free agent next summer.

A fair projection for this year would be heavy, top-line usage in Syracuse with the potential to be called up as an extra forward or injury replacement in the event of a long-term ailment to one of Tampa's top pivots. Unlike Syracuse teammate Cedric Paquette, however, Namestnikov looks long-term to be more of a scoring-line player. That might mean you see Paquette in the NHL full-time before Namestnikov simply because of the difference in roles and styles of the two players.

Ultimately, the Lightning have a lot of flexibility with their forward depth: if Vladdy forces his way onto the NHL roster at some point this year or at camp next year, Valtteri Filppula and Tyler Johnson can both be moved to wing to adjust. But it's important to note that the Lightning have been very deliberate in their development of Namestnikov as a center: he's played exclusively in the center of the ice since being drafted in 2011. Unlike other prospects like Jonathan Drouin, Cedric Paquette, or previously, Alex Killorn, when Namestnikov does eventually make the big club, it will almost certainly not be as a wing.