For those who've never used the older hockey stats sites, here's a guide to finding your way through the maze. With pictures.

Share All sharing options for: Beginner's guide to surviving without Extra Skater

Over the past two years, ExtraSkater.com has been an invaluable resource in helping people find and use hockey #fancystats. Sadly, if you go there today, this is what you'll see: 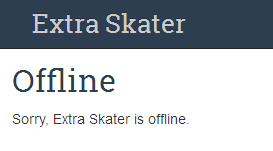 That's because the owner and operator, Darryl Metcalf, has been hired by the Toronto Maple Leafs for their new analytics department, and he's taken the site down as part of that deal.

That doesn't mean that we can no longer get at least some of this information. It's just not going to be as processed as what ES gave us. The data's still out there, compiled into a raw form. Until someone is able to rebuild all the coding that Metcalf had done, we're going to be using Behind The Net (the original #fancystats source), Hockey Analysis, and TimeOnIce.com.

Extra Skater did a fantastic job of pulling most of this information together in a useable way. There are hints that people are working on building a new ES-type site. Until then we'll have to get along the best we can with what we have.

With a single important exception, Hockey Analysis is going to give you the most data in forms closest to those you're used to seeing.

On the start page,

In the results, you'll find CF% or FF%, TMCF% (which is Quality of Teammates), OppCF% (which is Quality of Competition), OZFO% and DZFO% (which are the components of zone start percentage). You can safely ignore the HARO, HARD, etc., columns. Those are Hockey Analysis's offensive and defensive ratings, which may or may not actually be useful (likely not).

To explore an individual player's career in depth, click on their name to get to their Player page. Or from the start page, choose the "Player" button from the top of the page and find the player by name.

What you're looking at is marked in the horizontal red box. The player's individual stats are marked in the green box. Linemate time on ice in the vertical red box. CF% are the key differential here (blue boxes). The differences between apart and together are what WOWYs show you.

From the HA front page:

The one thing you can't get from Hockey Analysis are Relative Corsi and Fenwick (for players). Relative Corsi is available at BehindTheNet.ca. Relative Fenwick isn't available anywhere else. In addition, there may be some times that you need or want to use Behind the Net. Here's how to do that.

Behind the Net basics

From the start page, go to Statistics and choose Player Breakdown. 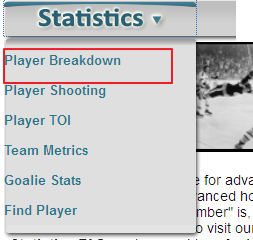 This is what pops up:

How to interpret BtN's data:

You want to ask yourself a few questions that are strictly data-related (in addition to all of the non-data-related eyetest questions.):

To answer these, you'll look at Corsi Relative, Corsi QoC, and Off Zone Start %, respectively.

Corsi QoC (which stands for Quality of Competition) tells whether the player's being used against stronger or weaker competition. A player can be expected to have high Corsi and Corsi Rel if they're facing easier opponents than their teammates. In this case, Filppula's QoC of .588 is rather higher than Purcell's -0.284. Filppula's opponents tended to outshoot their competition; Purcell's didn't.

Zone Start % tells whether a player is being used near the opponent's net more or near their own net more. If they're near their own net more, they'll always have lower Corsi. If they're there more than other players on the team they'll have lower Corsi Rel. In our example, neither player was used especially defensively, as both are above 50% in zone starts. But Purcell started in the offensive zone more than Filppula did, so he should be expected to have somewhat higher Corsi.

In the end, determining just how far apart Purcell & Filppula's numbers really were requires subjective judgment, but given the circumstances, it's fair to say "not that far." The more you get used to looking at the numbers, the more you'll be able to see who's outperforming their role--or who's in over their head.

More advanced stuff you can do:

There are a number of ways that you can change what information Behind the Net shows you. There are shortcuts to the various reports at the bottom of the home page, but you're probably going to change stuff anyway. The "Advanced" report is the standard Player Breakdown. 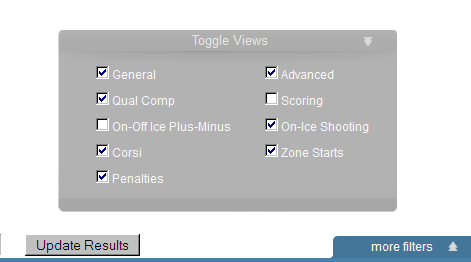 Or you can use the "Toggle Views" box to generate reports that have different information, such as scoring and all of the various components of Corsi and Corsi Rel. For the most part, you won't need to use those unless you want to do a deeper exploration of the numbers.

The one exception is QoT or Quality of Teammates. QoT has a much bigger effect on a player's Corsi and Corsi Rel than QoC does, so I really like to include it. Here's how to get there:

This will give you all the important info, including Corsi On, Corsi Rel, Corsi Qoc, Corsi QoT, Off Zone Start %. Scroll to the right if you need to.

QoT is interpreted just like QoC is. Higher numbers means a player plays with guys who shoot a lot. His Corsi will be pulled upward as a result, regardless of whether he himself is a guy who shoots a lot. Purcell's QoT and QoT Rel are very similar to Filppula's (they should be; they played together quite a bit), so linemates aren't really playing into the raw Corsi differences between the two.

Other reports BTN has that might be interesting to fans

If there are any questions, I'll be happy to answer to the best of my ability or we can crowdsource stuff. Hope this helps you navigate a site that can be intimidating at first. (It's really not as bad as it seems, I promise.)