Today is Tampa Bay Lightning day on NHL.com, including a puzzling projection of Tampa Bay's forward lines come fall. Raw Charge weighs in with a roster projection of it's own.

One of the perils of trying to cover an entire sport, rather than one specific team, is keeping up to date on all the latest information regarding all 30 teams around the NHL. No one can possibly do this, and it's part of why the proliferation of team-focused blog networks (like this one) has occurred in the last 5-10 years.

While Corey Masisak of NHL.com always does terrific work for NHL.com (including the superb Super 16 series, the best power rankings series going on the internet bar none), there are a few questions raised by his roster projection for this fall's 2014-15 Tampa Bay Lightning roster. Let's start with the forwards:

Masisak is keenly aware of some of the Tampa Bay Lightning tea leaves floating around, which he deserves credit for: Johnson and Stamkos did finish up the year together (with Johnson actually at center), Jerome Samson was added for veteran depth, and part of the stated reason Brian Boyle left the New York Rangers for the Tampa Bay Lightning was the opportunity to play a bigger role than just 4th line center and penalty-kill specialist.

The right wings can be sorted around as needed -- J.T. Brown has been useful moving up and down the line-up, and even on the left side when playing last year with Nate Thompson and Nikita Kucherov. Speaking of Kucherov, his waiver exemption might actually keep him off the roster to start the season -- Tampa Bay has too many forwards they can't risk exposing to waivers and losing for nothing. But it's hard to deny how effective he was at creating scoring chances and making things happen in space. He's a creative offensive player that may actually end up with Steven Stamkos on the top line before the end of the season, after he's got a little more pro experience under his belt.

A lot hinges on Drouin -- is he a top-6 winger or a third line center? It's actually hard to imagine Jon Cooper using Drouin heavily early in the season, so while long-term he most likely ends up with Stamkos it wouldn't be wild to see him start out as 3rd line LW or C in order to shelter him better, like Cooper did with Palat, Johnson and Panik when they broke in last year.

If Drouin does end up with Stamkos, sliding Callahan up from the usual spot he's projected (2RW) with them makes sense, as it's unlikely Cooper would go with two young guns alongside his top center. Stamkos can and should play a ton, and balancing the finesse and skill of Drouin with the puck retrieval and reliability of Callahan means that line can play big minutes without making Cooper do this: 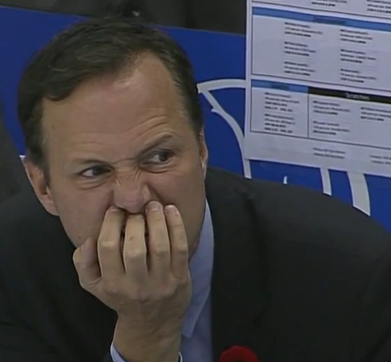 Ondrej Palat and Tyler Johnson were fantastic last year, and while you can make the argument for either guy sliding up into the top-6, with the way the roster is currently constructed the Lightning look like they'll be rolling a top-9 and defensive specialist fourth line. Brett Connolly fills the void left by Teddy Purcell, and either runs with his new role as a scoring line right wing or is traded.

As for the fourth line, it's still tough to see Brian Boyle anywhere else.

He talked a lot about leaving New York for a bigger role:

Boyle has made it clear he is looking for a bigger offensive role, although he was proud of what he did this season as a member of the fourth line.

"I was on the fourth line, and I didn't really like it, but it wasn't the fourth line I was used to," said Boyle, who had three postseason goals (one empty-netter) after six in the regular season. "We had three lines that could score on any shift - it was different, it was just different."

After saying how much he loves the Rangers and the opportunity they gave him, Boyle relayed the message sent to him from coach Alain Vigneault.

"I know what my role would be coming back here," said Boyle, likely looking for a two- or three-year deal in the range of $3 million to $4 million per. "In the playoffs and on a team that's going to win in May and June, it's an important role. But everybody wants to score more goals."

You can read between the lines here and suppose that this means Boyle came to Tampa Bay because he was promised a spot in the top-9. But things might not be so simple.

First off, Alain Vigneault's usage is notoriously extreme. Brian Boyle started just 23.4% of of his shifts in the offensive zone last year and was basically a defensive zone sacrificial lamb. He went out there to get his butt kicked and that allowed Vigneault to shelter his more offensive players, like Brad Richards (66.6% zone starts), to maximize their effectiveness, a strategy he first employed with the Vancouver Canucks and the Sedin twins.

You could look at the phrase "it wasn't the fourth line I was used to" and perhaps infer that this extreme usage is what Boyle is referring to. If that's the case, he needn't worry about his usage in Tampa Bay. A "fourth line defensive zone specialist" under Jon Cooper -- say, Nate Thompson -- still starts nearly half his shifts in the offensive zone. While it's tough to predict if Tampa Bay will continue to enjoy a healthy amount of offensive zone starts overall, the point is Cooper's usage is much more balanced than Vigneault's.

Boyle will have an opportunity to score on Tampa Bay's fourth line, likely with career 15.6% shooter Brenden Morrow on his left wing and a talented young wing on his right like J.T. Brown or Richard Panik, so some of his concerns about a larger (read: higher scoring) role are probably assuaged just by leaving Vigneault and the Rangers.

Your strongest candidates to start out as the 13th forward are Richard Panik, who was already used as a utility/extra forward for much of the back half of 2013-14, along with Cedric Paquette and Vladislav Namestnikov. All three have a much better chance of making the big roster than Jerome Samson, who's really just Evan Rankin's replacement for the Syracuse Crunch in the AHL.

The most important thing with the lineup presented here is the balance -- there's no rookie line, there's no grinding line, there's no scoring line. Every line has balance -- the youngest or newest skaters (Jonathan Drouin, Nikita Kucherov, Brett Connolly) are all on lines with established veterans (Ryan Callahan, Valtteri Filppula) or, in the case of Connolly, alongside experienced pros like Ondrej Palat and Tyler Johnson. No one is being asked to play out of position or in an unfamiliar role.

Ultimately, all of this projecting is a little silly; Jon Cooper's line blending last year coupled with his tendency to go with 11 forwards and 7 defensemen means trying to guess what combinations he'll use now is almost certainly a fruitless effort.