Over the last two years, Ryan Stimson (@RK_Stimp) has been leading a team of volunteers on a project to track the passes that lead to shot attempts across the NHL. This season, I have been doing the tracking for the Lightning games. Last week, Ryan released the latest set of data to the public. This release includes thirty three Lightning games. I expect to finish the full season by the summer. Despite the relatively small sample size, the data does provide an opportunity to start looking at some of the basic statistics this project will be exploring. For a breakdown on the passing project and an assessment of the value in this type of tracking, please see Ryan's piece at Hockey Graphs (Redefining Shot Quality One Pass at a Time)

In that piece, Ryan identifies a new statistic called Primary Shot Contributions. A PSC occurs any time a player takes a shot after receiving a pass or makes the final pass preceding a shot. Basically, shots + primary shot assists = PSC. This post will provide the PSC stats for the Lightning in the games tracked thus far. This data set includes all situations.

The first graph shows PSC/60 (Primary Shot Contributions per sixty minutes of time on ice) with the bars colored by TOI (all TOI data pulled from Hockey Reference). Darker blue means the player plays a lot of minutes and darker red means that they don't play as much. Keep in mind that this is a limited sample. 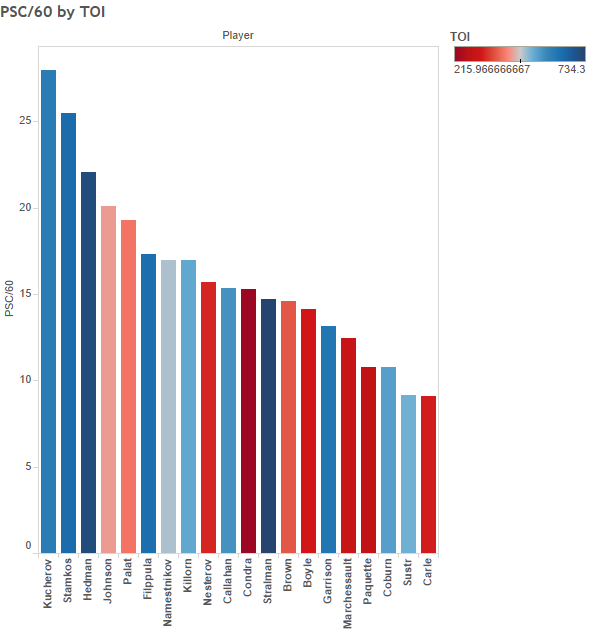 This initial graph shows what anyone who follows the Lightning would expect to see. The top offensive players on the team contribute to the most shots. Nikita Kucherov leading the team in this metric is an indication of how just how great of a player he is becoming. However, I have not tracked any games since the beginning of February so most of Steven Stamkos' recent hot streak is not included. He has likely improved his numbers during that time. Another interesting thing to note is Victor Hedman's shot generation. He is third on the team and ahead of forwards like Tyler Johnson and Ondrej Palat.

The next graph shows only the PSCs that lead to scoring chances. Again, the graph is colored by TOI to display usage. 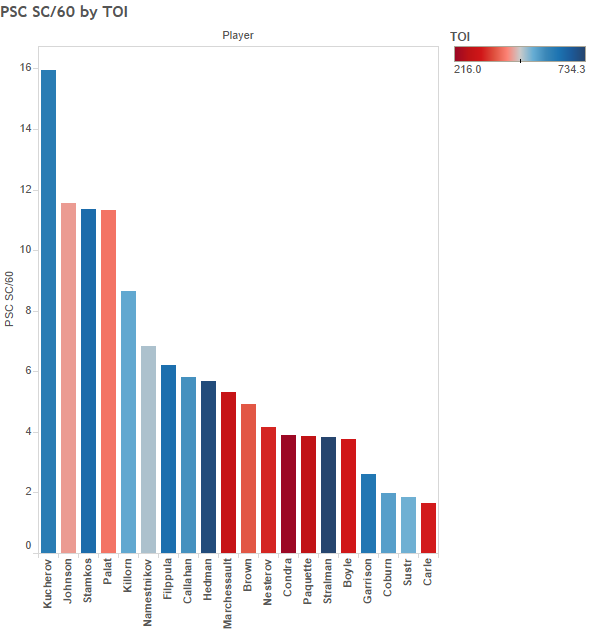 By this metric, Nikita Kucherov appears even more important to the Lightning offense during this sample of games. He is generating nearly 16 scoring chances from his PSCs per 60 minutes of TOI while no other player is even at 12. That's a gap of over 30%. Also worth noting is that this sample includes the stretch of games where Vladislav Namestnikov was centering Steven Stamkos.

The next graph is a combination of the previous two. It shows the total PSC/60 colored by the percentage of PSCs that led to scoring chances. A dark blue means that a high percentage of the player's PSCs are generating scoring chances while a dark red indicates the opposite. 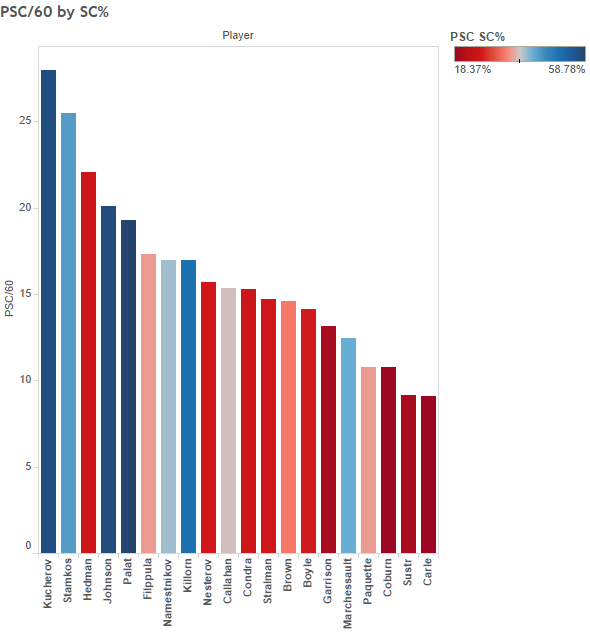 Two other players in particular are worth noting. The first is Victor Hedman. While he has the third highest PSC/60 on the team, relatively few of his PSCs lead to scoring chances. This can be explained fairly easily by the fact that he is a defenseman. Many of his shots come from the point and many of his primary assists are passes to his defensive partner who then shoots from the point. The other player worth noting is Jonathan Marchessault. While his PSC/60 is relatively low, a high percentage of his PSCs lead to scoring chances. With the Lightning committed to the top two lines of Stamkos/Callahan/Killorn and Johnson/Kucherov/Palat, a third scoring line built around Namestnikov and Marchessault is an interesting option for the coaching staff

As part of the passing project, volunteers track the final three passes that lead to a shot attempt. Instead of just looking at the PSC/60, the following graphs show all shots and shot assists for the Lightning using the same basic graphs as above. For the purposes of this post, this statistic is called PSC3/60. The graphs differ slightly from those above in that they are stacked by the shot or shot assist type. A1 is the first assist before the shot, A2 is the second assist before the shot and A3 is the third assist before the shot. 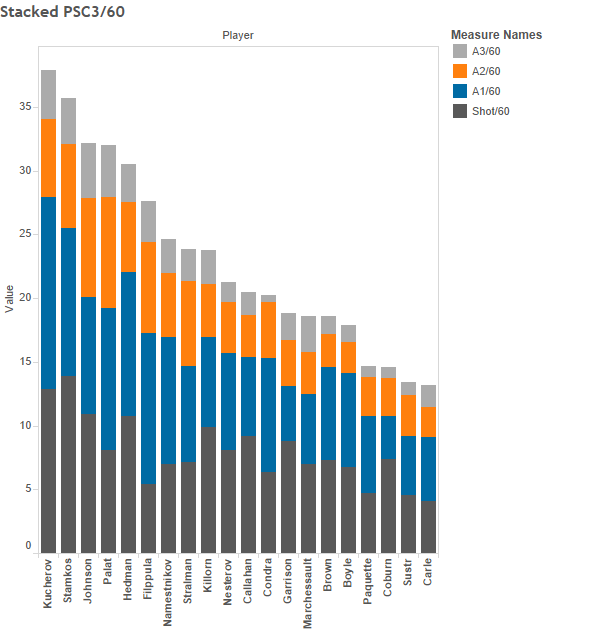 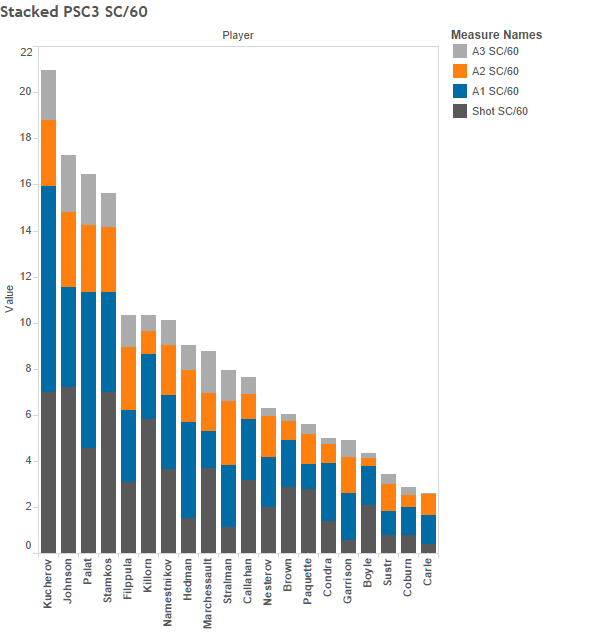 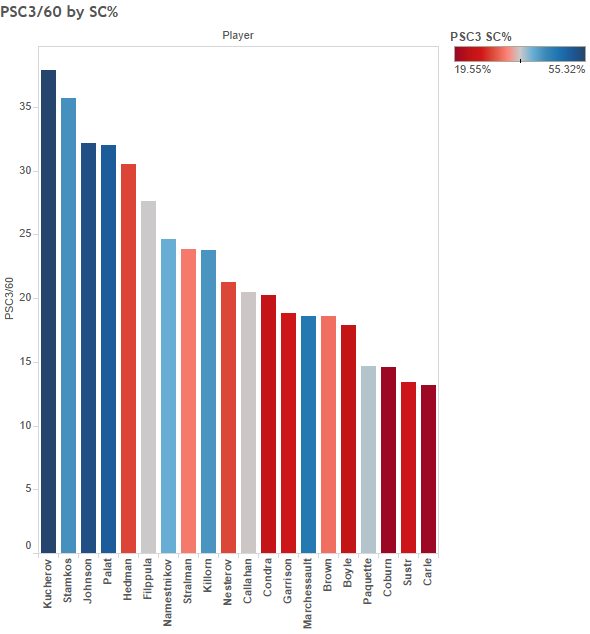 This data set has much more to explore and I intend to do so as the season goes on. I encourage anyone interested in the project to look at the data and play with it on your own. You can access the data on Hockey Graphs. You can also go directly to this Lightning work via Tableau Public at Tableau Lightning Data. For more information on how to help with the project, reach out to Ryan on Twitter.