One and Done is a (hopefully) ongoing series exploring the players who had the quickest of cups of coffee with the team. The players that played in one game, and one game only, for the Tampa Bay Lightning.

Often, when a player is signed in late July or August the phrase "organization depth" is contained somewhere in the article. If you’re a player it’s probably not exactly how you want your athletic epitaph to read. Scott Jackson was one of those players. Originally drafted by the St. Louis Blues in 2005, he signed with the Lightning in July of 2008 after he failed to crack the big leagues with the midwestern organization.

He would play 240 games for the Norfolk Admirals over the course of the next four seasons. For the Lightning he would play 1. One game, the last game of the 2009-10 season would be the only taste of the NHL that the rugged defenseman would have in his career.

Jackson wasn’t a bad player, and in a just world he probably would have had more than one NHL appearance, but luck and circumstances just weren’t in his favor. He was probably just a bit too young (22) for the Lightning brass to trust him with a bigger role on a club that was trying to figure out if Matt Lashoff, Matt Smaby and Vlad Mihalik were going to pan out (they didn’t).

He did get the call up for the final game of the season, replacing an injured Victor Hedman in a match-up against the down-state rival Florida Panthers. For 13 minutes he was an NHL defenseman. He didn’t record any points in the 3-1 Lightning win. He did play his style of game by blocking one shot and recording a hit against the Panthers. Two notable things would happen in that game:

1. Steven Stamkos would score an empty-netter for a share of the Rocket Richard trophy with Sidney Crosby.

2. Mattias Ohlund would play in his final game in a Lightning uniform.

Jackson would return to Norfolk the next season and be part of the young team that shredded the AHL, ripped off a ridiculous 29 game winning streak and eventually win the Calder Cup in 2011-12. Jackson was a big part of the successful season as the steady, stay-at-home defenseman who wasn’t afraid to drop the gloves or block a shot. His willingness to stop pucks with his body did cost him 12 games in the playoffs as a shot to his head sidelined him for 12 games.

Unfortunately for Jackson the Lightning as a team were changing stylistically. Their offense was being built on puck movement and Mr. Yzerman was looking for blue liners that could move the puck with passing or skating. That wasn’t the native British Columbian’s game. The championship final against the Toronto Marlies would be the last game he played.

What he is doing now is a bit hard to track down. Searching for "Scott Jackson" on the internet does return some interesting hits, but none refer to the former hockey player. I’m pretty sure he’s not running to be a superior court judge nor did he murder Pearl Bryan in 1896 (holy crap a ghost story!)

Scouring the Twitter followers of Tyler Johnson, Jon Cooper and Dustin Tokarski didn’t pay off either. His luxurious beard had a Twitter account, but as far as I can tell he doesn't. Wherever he is and whatever he is doing remains a mystery.

Does he have any Lightning hockey cards? 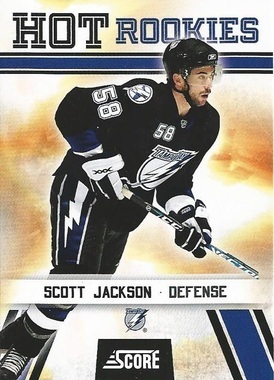