The Tampa Bay Lightning have selected Cal Foote with the 14th overall pick in the first round of the 2017 NHL Entry Draft. Foote, the son of NHLer Adam Foote, is a right-handed defenseman from the Kelowna Rockets of the WHL. He weighs in at 212 pounds and is 6’3” tall.

Foote has played two seasons in the WHL with the Kelowna Rockets. In his rookie season, he put up eight goals and 36 points. This past season he added six goals and upped his production to 57 points in 71 games. He added another seven points in 14 games in the WHL playoffs. He has both American and Canadian citizenship, but has not represented either country in international competition.

Not as big of an offensive force as some other defensive prospects that were available, Foote plays a strong two-way game. He has plenty of size and plays a physical game. The Rockets used him in all situations and put him on ice for big minutes throughout the season. He was also one of the prospects that we covered in our scouting series. 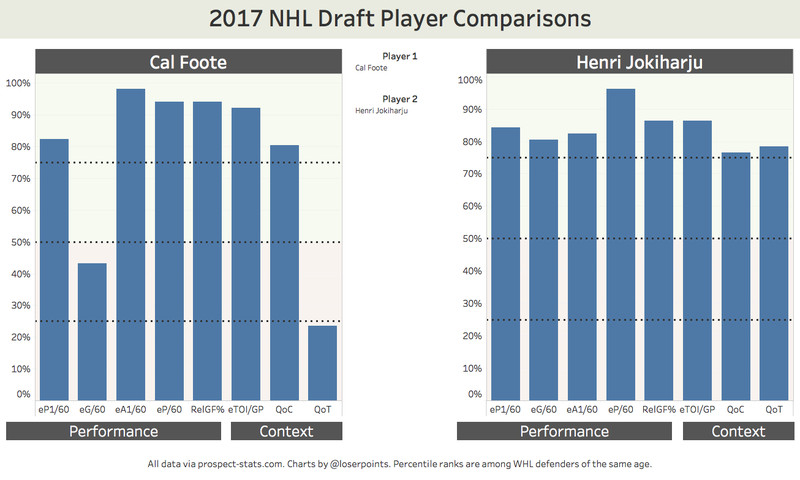 Foote was ranked 14th by HockeyProspects.com, 20th by Bob McKenzie of TSN.com, and 25th by Corey Pronman of ESPN.com. There is an argument that Foote could have been available later in the first round and our profile on him suggested as much that general manager Steve Yzerman could trade down and still select him.

There is always going to be differences in opinion with scouting players in the draft. As you get further into the rankings, the differences from player-to-player become smaller. There’s also going to be different biases for each scout and scouting staff. We know that the Lightning value hockey IQ and have also moved more towards high character players that play defensively responsible. Foote fits that bill and obviously Yzerman and the scouting staff liked what they saw.

In addition, the lack of a bona fide top four potential right handed defenseman likely drove this pick for the Lightning. The trade for Sergachev did a lot to bolster the left side with Slater Koekkoek, Dominic Masin, and Libor Hajek. Foote gives the system a strong right-handed prospect.

Foote also has a December birthdate. That will allow him to go back to the WHL for another year of seasoning before making his professional debut most likely with the Syracuse Crunch. If his offense in the WHL makes a big jump over the point per game mark in 2017-18, along with continuing his defensive responsibilities, 2018-19 could see him vying for a roster spot in Tampa Bay. That isn’t likely for a young defenseman, but you never can tell.

Story Developing. Check back for updates, analysis, and video highlights.

Table is via Elite Prospects (http://www.eliteprospects.com/embed_player_stats.php?player=247895)