Darcy Tucker was a solid NHL player that had a good 15-year career and almost 1,000 games played in his career. After 3 years in Montreal, Tucker was shipped to the Tampa Bay Lightning in a 6 player trade. That trade created a trickle down effect that still hasn’t ended and had an effect in both the 2017 NHL Expansion Draft and the 2017 NHL Entry Draft.

The Canadiens didn’t have much after the original trade. Poulin had 31 goals and 44 assists for 75 points in 277 games in the 5 seasons that he played with Montreal. Vukota only played with Montreal until the end of the season, gathering 76 penalty minutes in 22 games.

Igor Ulanov, the last piece in the Canadiens’ half of the trade, had 4 goals and 15 assists for 19 points and 197 penalty minutes in 123 games for the Canadiens until March 9th, 2000, when he was, with Alain Nasreddine, traded to the Edmonton Oilers for Matthieu Descoteaux and Christian Laflamme. Ulanov had 3 goals and 23 assists for 26 points in 81 games with the Oilers. Nasreddine left the NHL before the trade and didn’t return until 2002-03. Descoteaux only played in 5 NHL games in his career, all with the Canadiens, recorded 1 goal and 1 assist. Finally, Laflamme played in 54 games with the Canadiens, recording 5 points.

End of 1st half of trade 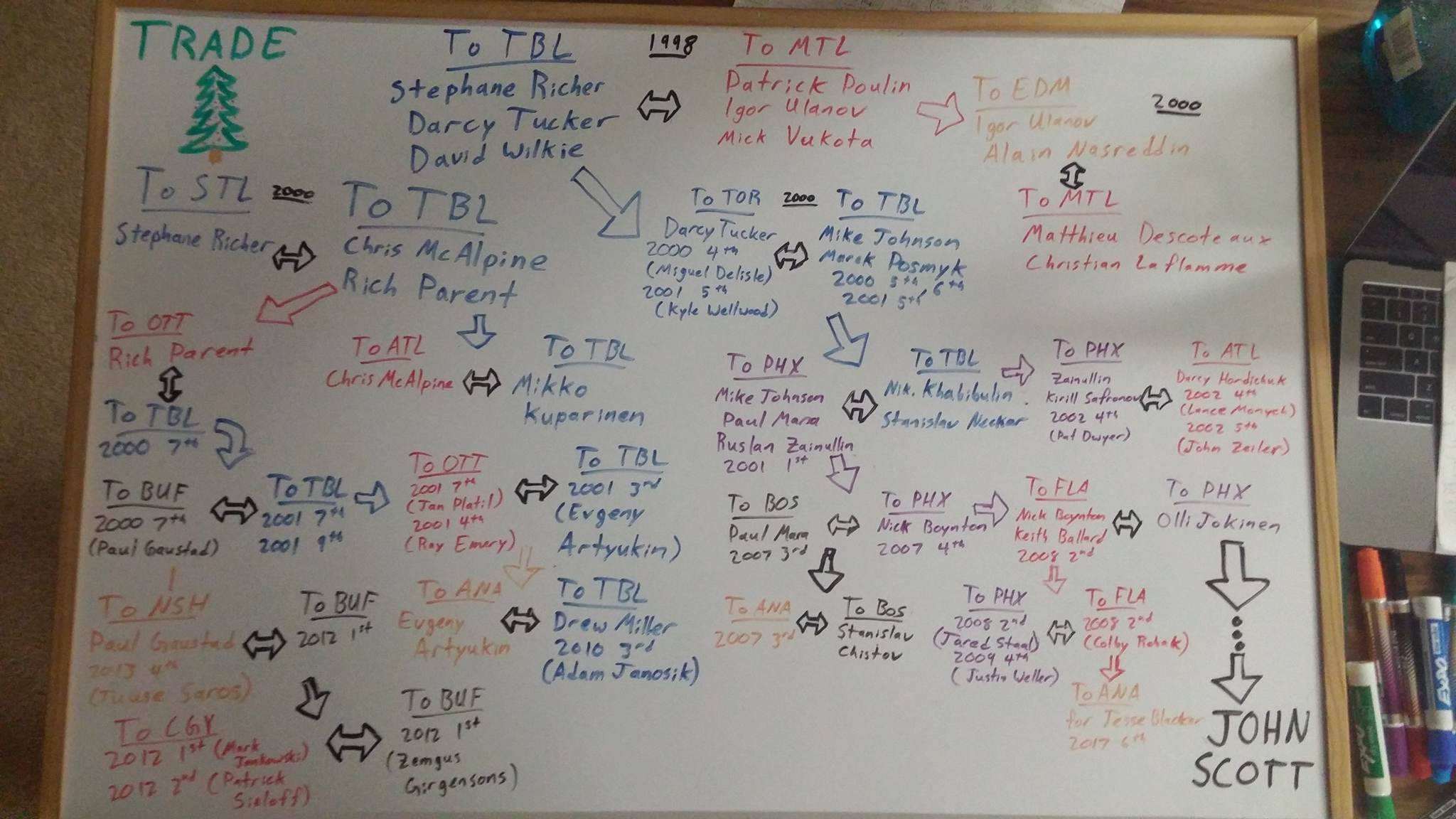 So the Bolts acquired Stephane Richer, Darcy Tucker, and David Wilkie in the original trade with the Canadiens. Wilkie played 75 games with the Lightning, putting up 2 goals and 12 assists for 14 points. However, he only played in 1 game after the 1998-99 season, and was out of hockey by 2001-02.

Richer was on the Lightning until the middle of the 1999-00 season, recording 28 goals and 37 assists for 65 points in 110 games with the Bolts. On January 13th, 2000, he was sent to the St. Louis for Chris McAlpine and Rich Parent. McAlpine played 10 games with the Lightning, recording 1 goal and 1 assist for 2 points. McAlpine was then sent to the Atlanta Thrashers in exchange for Mikko Kuparinen on March 11th, 2000. Kuparinen never even reached the AHL, with McAlpine played professionally until 2004-05.

After playing in 14 games and going 2-7-1 with a .878 save %, Rich Parent was sent to Ottawa for a 2000 7th round pick. This pick was then sent to Buffalo for a 2001 7th and a 2001 9th. The Sabres ended up selecting Paul Gaustad with the pick that they received. Gaustad stayed with the Sabres until the 2012 trade deadline, when he was sent to the Nashville Predators along with a 2013 4th round pick for a 2012 1st round draft pick. The 4th round pick that Buffalo sent to Nashville stayed in their possession, and they selected Juuse Saros, current backup and future starter for Nashville.

The 1st round pick that Buffalo acquired was then sent to the Calgary Flames, along with a 2012 2nd round pick in exchange for a 1st round pick. The Sabres used that newly acquired pick to select NHL All-Star Zemgus Girgensons, while the Flames took Mark Jankowski and then Patrick Sieloff with their two acquired picks.

Going back to the original Paul Gaustad trade, the 2001 7th round pick was sent to the Ottawa Senators, along with a 2001 4th round draft pick, in exchange for a 2001 3rd round pick. Ottawa used their newly acquired picks to select Ray Emery, part-time NHL goalie, and Jan Platil, who never made the NHL. The Lightning selected Evgeny Artyukhin with the 2001 3rd round pick that they acquired. Artyukhin registered 10 goals and 23 assists for 33 points in 145 games with the Bolts through 2 seasons. On August 13th, 2009, Artyukhin was sent to the Anaheim Ducks in exchange for Drew Miller and a 2010 3rd round pick. That 3rd round pick became Adam Janosik. Miller failed to register a point in the 14 games he played with the Lightning that season, while Janosik is currently played in the Czech league.

In the Lightning’s return from the trade, they received Mike Johnson, Marlek Posmyk, a 2000 5th, a 2000 6th, and a 2001 5th. Mike Johnson recorded 21 goals and 39 assists for 60 points in 92 games with the Lightning before being traded to the Phoenix Coyotes along with Paul Mara, Ruslan Zainullin, and a 2001 2nd round pick. In exchange, the Lightning acquired Stanislav Neckar and the rights to restricted free agent Nikolai Khabibulin.

The 2008 2nd and a 2009 4th was traded to the Coyotes for a 2008 2nd. The Panthers selected Colby Robak with the 2nd round pick that they acquired, while the Coyotes selected Jared Staal and Justin Weller with their 2008 2nd and 2009 4th round picks. Robak was traded to the Anaheim Ducks on December 4th, 2014, in exchange for Jesse Blacker and a conditional draft pick that depended on how many games Robak played for the Panthers in 2014-15. That pick was exercised in 2017, when the Panthers selected Sebastian Repo in the 6th round.

Ruslan Zainullin, acquired by the Coyotes in the 2nd Mara trade, was traded again on March 19th, 2002, along with Kirill Safronov and a 2002 4th round draft pick (Pat Dwyer), to the Atlanta Thrashers. The return package back included Darcy Hordichuk, a 2002 4th round pick (Lance Monych), and a 2002 5th round pick (John Zeiler). Safronov and Simon Gamache were traded to the Nashville Predators for Tomas Kloucek and Ben Simon. Hordichuk and a 2003 2nd round round pick (Kamil Kreps) were traded to the Florida Panthers in exchange for Brad Ference. Ference was then traded to the New Jersey Devils in exchange for Pascal Rheaume, Ray Schultz, and Steven Spencer.

Going back to the final pieces of the 2nd Mara trade: Neckar played 3 seasons for the Lightning, registering 2 goals and 11 assists for 13 points in 163 games. Khabibulin became one of the best goalies in Tampa Bay Lightning history, going 83-74-28 with a .914 save percentage and a 2.39 goals against average.

Matt Frattin, along with Ben Scrivens, a 2015 2nd round pick, and cash considerations, was dealt to the Los Angeles Kings from the Toronto Maple Leafs. In exchange, the Leafs received Jonathan Bernier. Bernier was a highly touted goalie prospect at the time, but only turned out to be an average goalie in Toronto. Bernier was then traded for a conditional draft pick that never was exercised.

Meanwhile, that 2015 2nd that was still in Columbus’ possession was sent off to the Leafs with a 2015 3rd in exchange for a 2015 1st round pick. The Leafs picked Travis Dermott and Martins Dzierkals with their two picks, respectively, while the Blue Jackets selected Gabriel Carlsson with the 1st round pick they acquired.

As far as the winners of the trade, I would consider the Tampa Bay Lightning, the Nashville Predators, the Los Angeles Kings, and the Vegas Golden Knights winners. The Lightning felt an immediate impact in the trickle-down effect as Khabibulan helped them win their first ever Stanley Cup. Nashville and Los Angeles both got great piece as a result of the trickle-down effect, as Juuse Saros is an incredible goalie with a very bright future in Nashville, while Marian Gaborik helped the Kings to the 2014 Stanley Cup. The Knights, who didn’t even exist when the original trade was made, used the players that they selected in the NHL Expansion Draft to acquire more draft picks for the future.

Who do you think were the winners of the trade? What trade do you want me to analyze next? Leave your opinions below and please follow me @Tampa_baysports on Instagram for the latest news and scores of the Lightning, Bucs, and Rays. If you have any questions or suggestions about my next article, please feel free to email me at Tampabaysports0@gmail.com