In preparation for Saturday night’s jersey retirement ceremony prior to the Lightning’s game against Los Angeles, Vinny Lecavalier spoke with local media at Amalie Arena

Share All sharing options for: Vinny’s ready for Saturday night

The Tampa Bay Lightning will retire former captain Vinny Lecavalier’s jersey number 4 on Saturday night in a ceremony taking place prior to the Lightning’s game against the visiting Los Angeles Kings.

Leading up to the big night, Lecavalier stopped by Amalie Arena Thursday morning to speak with members of the Tampa Bay media.

Lecavalier mentioned that the gesture means a lot to him, that it’s particularly meaningful that he’ll be joining long-time teammate and friend Marty St. Louis as only the second Lightning player to receive this honor. “It’s going to be a lot of fun, that’s for sure”, he said.

When asked about Lecavalier’s attachment to Tampa, where he played 14 seasons of his 17 year career, he said, “This is literally where I grew up. I left home at 14 (to play with Notre Dame of the Saskatchewan Hockey Association and Rimouski Océanic of the Quebec Major Junior Hockey League) and didn’t really have a chance to settle and put down roots until I got here. I had a nice career and built a lot of friendships here.” 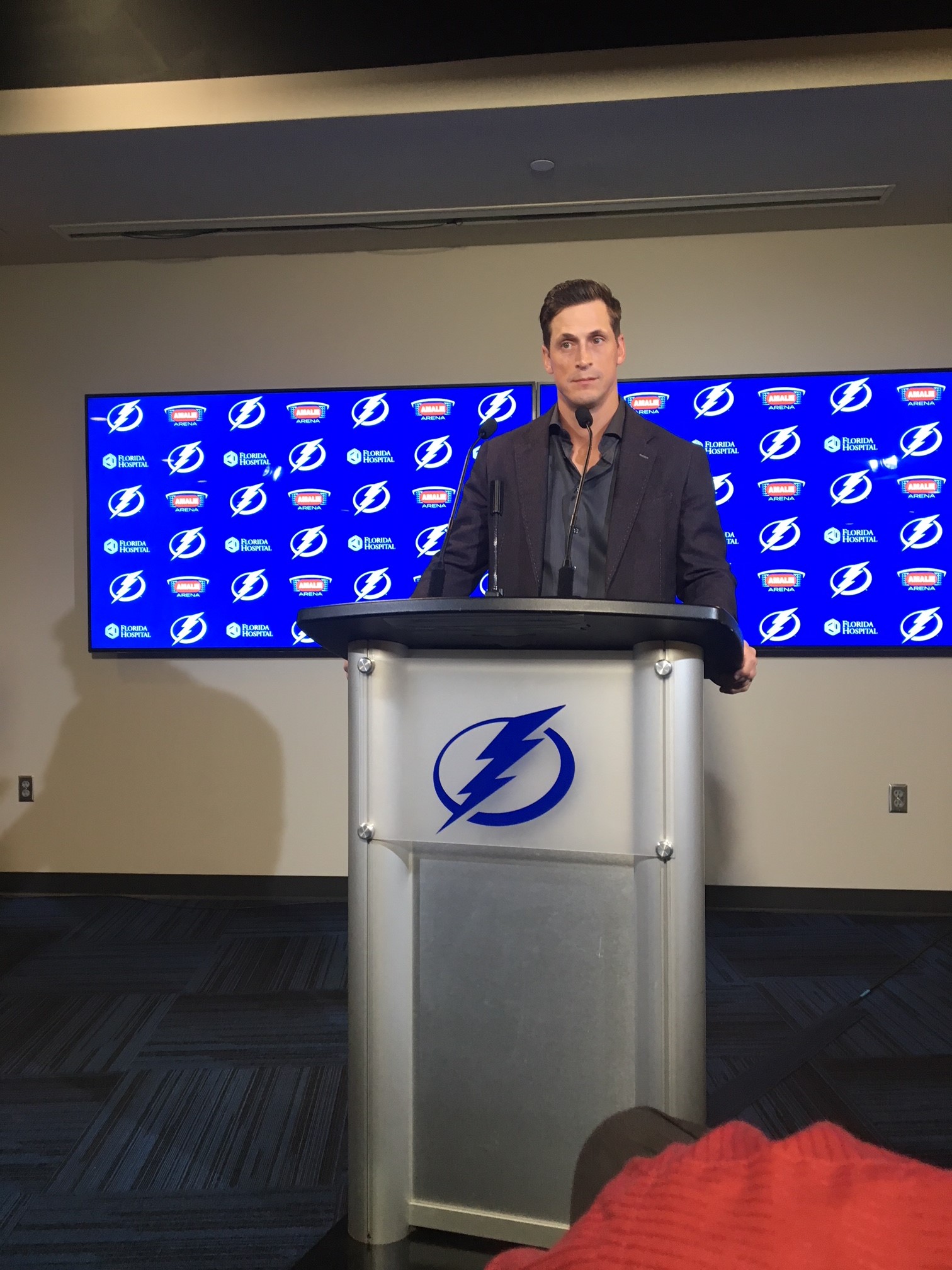 Lecavalier was asked about the permanence of having a jersey retired, in contrast to the day-to-day mindset required of professional athletes:

“You know, it’s funny. When we won the Cup (in 2004), I immediately wanted to win another one, and I don’t think I ever really took time to appreciate winning that one. During my rookie season, (teammate) Wendell Clark told me that it would all go by in a flash and I remember saying, ‘yeah, whatever Wendell’. But that’s when you’re 18 and before you know it, you’re 35 and it’s all behind you. So yeah, I’m really going to focus on enjoying this moment Saturday night and really appreciate what it all means.”

Jay Feaster was the team’s general manager when the team won that Stanley Cup in 2004. A major part of his legacy was not trading Lecavalier when he and then-head coach John Tortorella clashed. Did he ever imagine the action he didn’t take would result in Lecavalier’s number one day being hoisted to the rafters?

“I certainly wasn’t looking at it with an eye toward 18 years, 20 years or whatever down the road, but I did always feel that this was a special player, a special person and I just felt very strongly that we had never tried to manage the situation. From the time he was 18 years old and the first round pick overall, there was so much pressure. And the organization put pressure on him. Then the organization changed and there was a different kind of pressure. They took the captaincy away and there’s the holdout and just all this stuff, but was anybody trying to manage it? And that’s what i really felt strongly about back then, was that’s not going to be my legacy, that I’m not going to trade this special player without trying to make it work.”

The pre-game ceremony honoring Lecavalier’s career will include NHL Commissioner Gary Bettman, Lightning Chairman and Governor Jeff Vinik, Lightning CEO Steve Griggs, as well as former teammates and executives. The hour-long ceremony will also include the banner raising of his jersey. The pre-game ceremony will begin at 6 p.m. and the game will start at 7:50 p.m. Fans in attendance will receive a Lecavalier mini-locker.