Hello, everyone! My name is VanillaEars, and I've been a longtime member of Raw Charge - both in reading posts and contributing to game threads for the 2016 playoffs, before I switched to Reddit's TBL game day threads!

I'll be posting my opinions and analyses of various aspects of the Lightning's 2017-18 season and historical moments, both here and on Reddit throughout the offseason. For that reason, the two posts will be likely quite similar so as to allow both readerships on Reddit & Raw Charge the same opportunity to read what I've written!

So, let's get underway. Today, I'll be discussing the most polarizing part of the Tampa Bay Lightning's game this season: the much-maligned penalty kill. With the recent developments that Rick Bowness, former assistant coach in charge of the defensive corps and PK, has been let go, I thought I'd take a look at our penalty kill which was decent to start the season but then ended up as a tire fire.

The numbers aren't pretty. The Lightning were 28th out of all teams in the NHL's regular season on the PK, with a 76.1% efficiency rate. The remaining teams below them were Philadelphia (blown out in 1st round), Montreal (DNQ for playoffs), and the Islanders (DNQ). In the playoffs, Tampa ranked 10th out of 16 teams with an even lower 75.0% efficiency rate.
How could we be so atrocious at this? I'll break this answer down into two segments, the personnel and the structure.

I'll begin by listing the average time on ice per game shorthanded by Lightning skaters throughout the 2017-18 regular season.

What does this tell us? For one, at least Bowness has trusted many players in killing penalties rather than just a specific unit 1 and unit 2. This is good in the sense that our key players such as Stralman and Hedman aren't exhausted by the end of their penalty killing. However, this falters in the sense that chemistry isn't as strong amongst players out there - as in, who has the point, the half-boards, the slot covered, etc. As a result, little mistakes get made during the penalty killing shift, which often resulted in the Lightning being burnt from a goal against.

In addition, the utilisation of many skaters resulted in haphazard line changes. I heard from Sportsnet's broadcast in Game 7 against WSH no fewer than three times that "Tampa just made an atrocious line change." (paraphrased) This mistake, especially during a penalty kill, opens up the ice and results in extremely high-quality chances for the team on the power play to rush up the ice with numbers. This effect becomes even more prominent in the second period of games with a long change necessary to get off the ice. Players scrambling to get on and off leads to more breakdowns in communication and ultimately, more goals against.

Finally, the personnel out there is something to look at. In terms of defencemen, McDonagh will remain on the team for another year and hopefully provide an excellent PK presence. Hedman is a cornerstone of our team at even strength, on the PP, and on the PK. Thus, this is already two LHD capable of being a "Unit 1/2", should the new defence coach choose to go in this direction over Bowness' strategy of mix 'n' match. In terms of RHD, Stralman and Girardi have been solid for much of the year and I believe that two pairings of McDonagh - Stralman, and Hedman - Girardi utilised throughout the year will be sufficient. Furthermore, due to these lineups essentially being the playoff defence pairings, the players will already have developed chemistry with one another and will be capable of communicating effectively.
In terms of forwards, I'd like to see more of Palat and Gourde. Their SH ATOI ranks lowest of all consistent penalty killing forwards. The former's excellent two-way play and the latter's tenacious aggression are both qualities to be desired in a penalty killer and should earn them more time.

Additionally, Point and Cirelli made huge strides this year. With both being natural centres, putting them on the ice separately will pay dividends in winning the faceoffs, an integral part of successfully killing a penalty.

I must confess that I don't particularly enjoy seeing Killorn on the PK. I feel that his lack of speed definitely exposes us when a shooter fakes a shot and he goes down, thus allowing the shooter to just step around him with ease and turn the play momentarily into a 5v3.

Johnson has consistently been a good penalty killer throughout his career and I don't mind having him on alongside either Point or Cirelli in case either get tossed from the dot.

Callahan is currently recovering from shoulder surgery and when he returns I expect to see him slot in the lineup for a few PK shifts. I don't expect Paquette to return to TB for next season and that creates the following lineup for PKers:

A common complaint throughout the year is that our penalty kill has been the epitome of passive - reluctant to take risks, and more importantly reacting to the opposition's play. This is significant because in doing so, the Lightning concede respect to their opponent to make plays in the offensive zone, thus allowing them to be consistently one step ahead of TB.

I'll look at a few still images of our PK structure from the Washington series, and analyse where exactly our structure failed to adjust for the lethal power play of WSH. 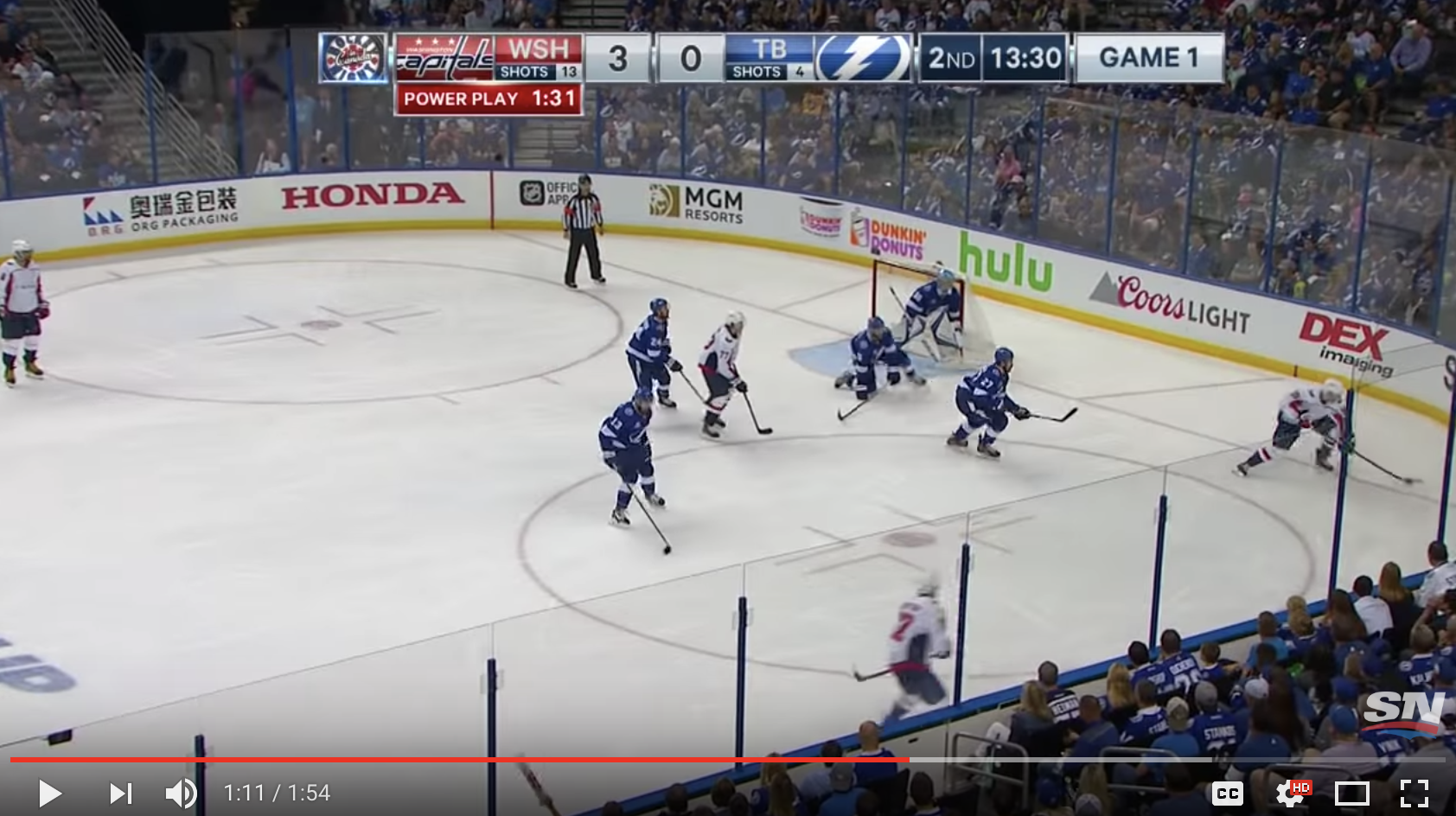 Taken from Game 1, we see here that Paquette and Callahan are out near the slot where Oshie has parked himself. Callahan is in position to sticklift Oshie should Eller pass into the slot. Not exactly sure what Paquette is covering at that moment, but he's there should Eller pass back to the right point. However, Girardi is sliding down to block....what? This is a breakdown in communication. Ovechkin is not in a position to receive Eller's pass, and while I understand all eyes are on the puck, this already takes him out of a potential quick passing sequence. 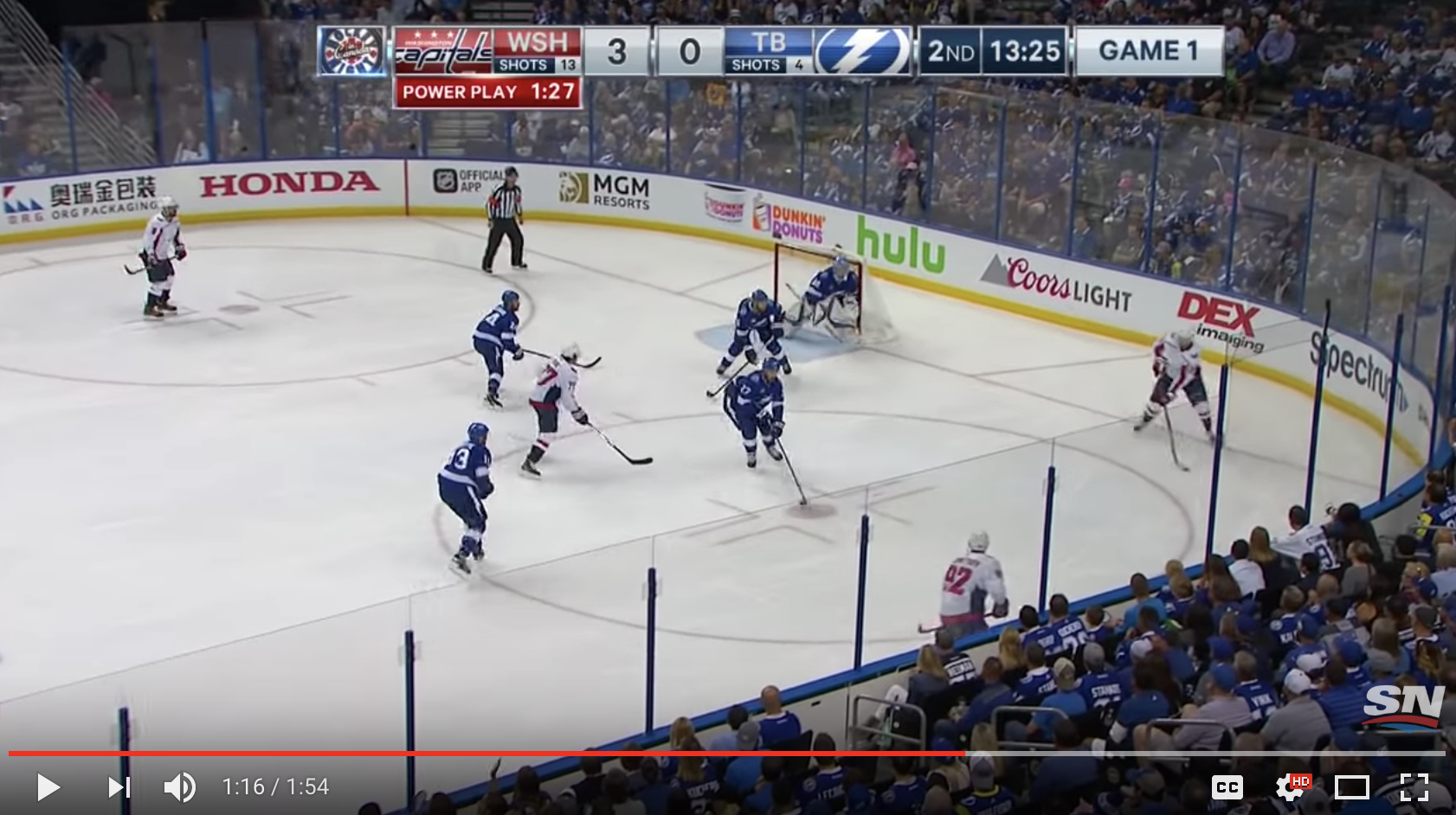 Five seconds later, not much has happened. Eller still has the puck near the bottom of the right faceoff dot, but look carefully. Ovechkin has now crept into position at his signature spot while Girardi has recovered and is now back in play. In my opinion, McDonagh should be pressuring the lane between Kuznetsov and Eller more while Paquette and Callahan should move downwards to cover Oshie in the slot. While this opens up the pass back to the point, it's a "lesser of two evils" scenario. Our passive kill has created two options for WSH: the cross crease to Ovechkin, or the pass back to the point before sliding across to Ovechkin on the left. In the latter scenario, at least Vasilevskiy is given slightly more time to get across and stop the shot coming. Of course, being more aggressive denies the puck-carrier from taking too much time to think about either option; this allows for our PKers to pressure the forwards and cause turnovers if executed correctly. 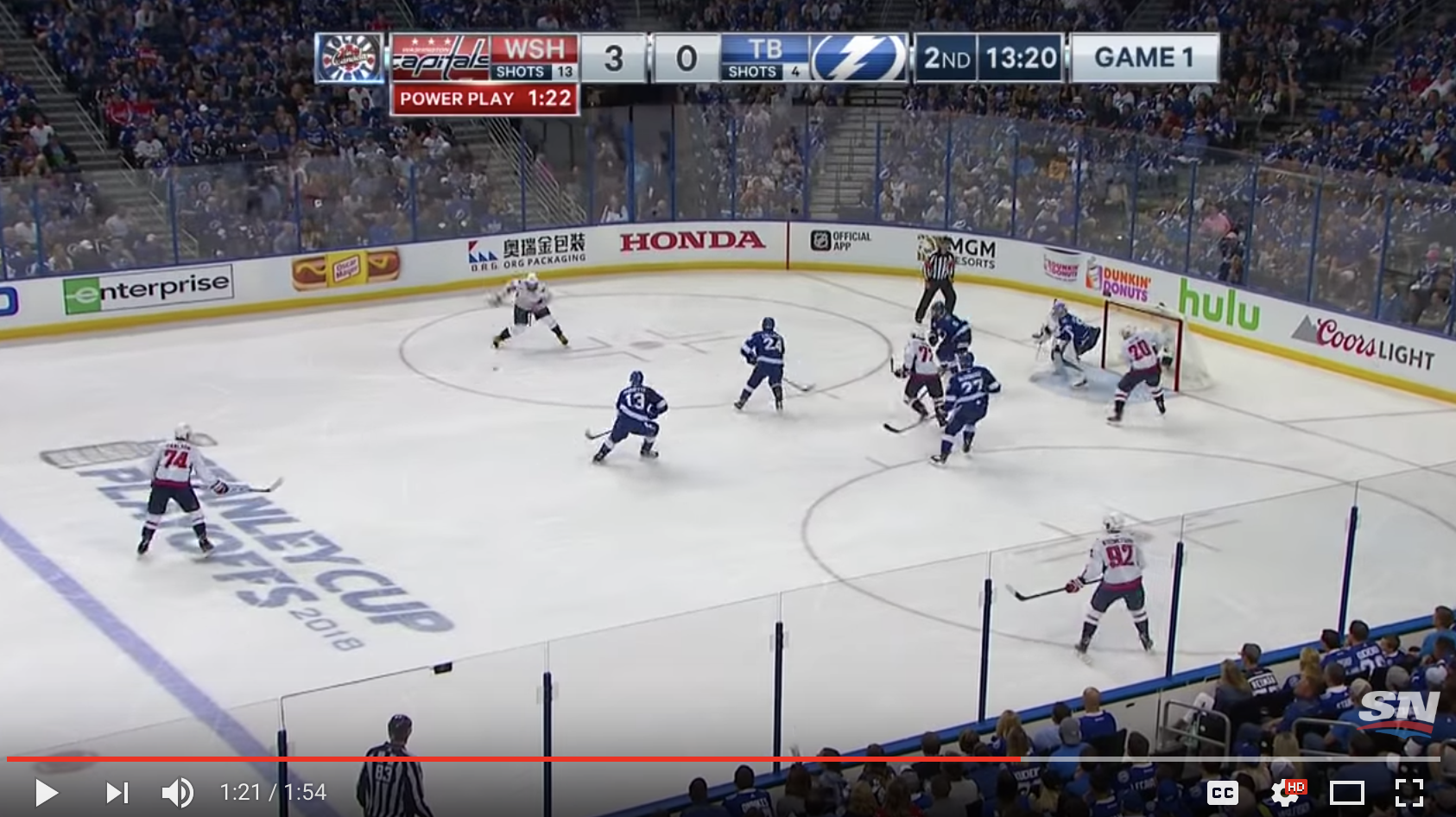 Opting for the "lesser of two evils" play that I advocated for, Carlson receives the puck at the point five seconds later and sends it over to Ovechkin where he is in the motion of one-timing it. At this moment, you see that Callahan is not in the lane of the shot. That's probably a good thing - for his health's sake; additionally, it doesn't screen Vasilevskiy, who currently has a clear lane to see the puck all the way. Unfortunately, look at Eller who has crept into the crease area hunting for a rebound. That's McDonagh's man, in my opinion. 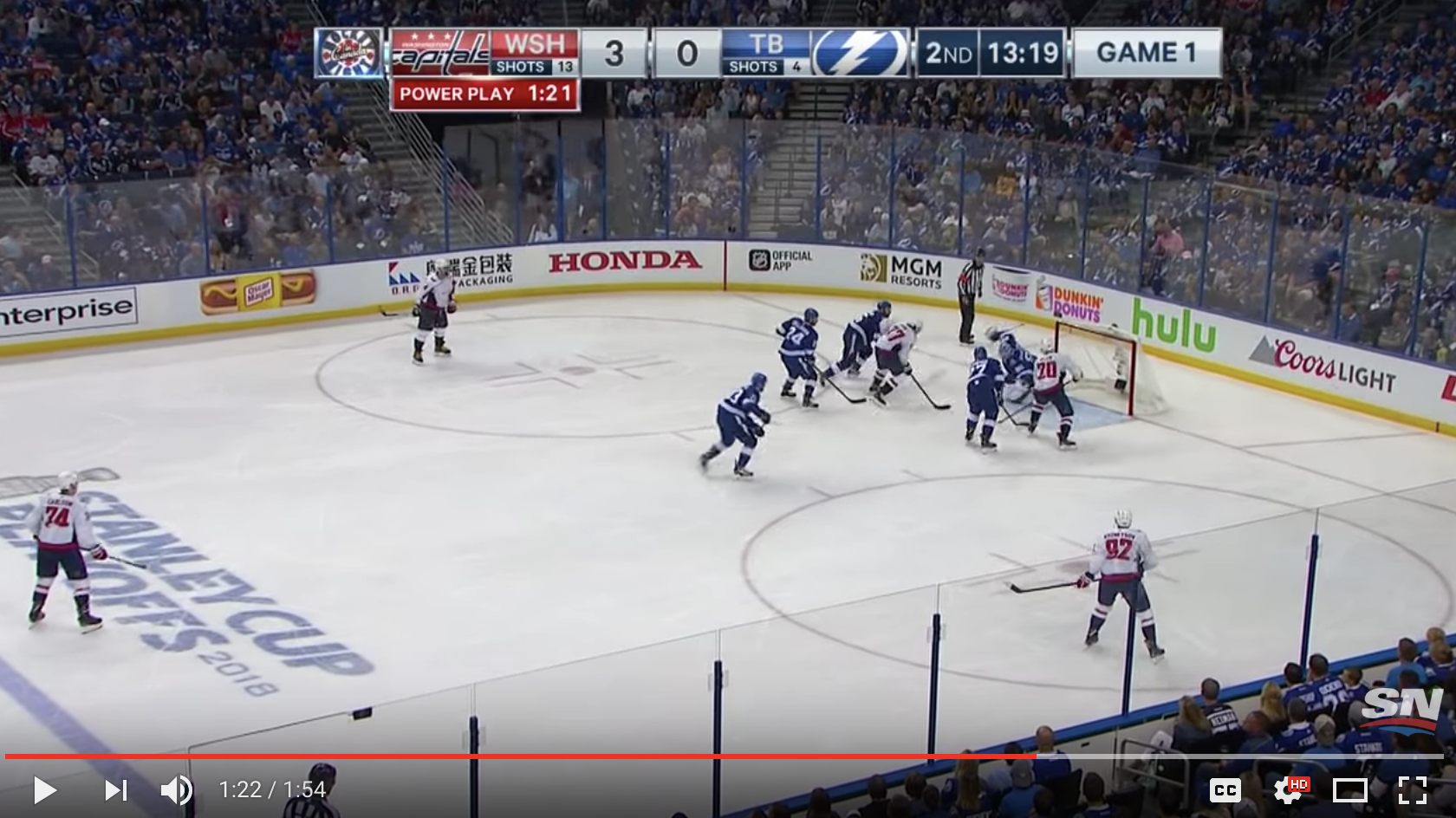 And whaddya know, Vasilevskiy stops the initial shot but Eller has an unchecked path to the net while McDonagh is still getting over to him. Half a second later is all it takes for Eller to bang in the rebound for a 4-0 lead. In addition, even if Eller didn't get that puck, Oshie also has a clear lane to the net because Girardi is slightly out of position in this sequence.

In summary, the passive nature of our PK, our reluctance to make plays, and our personnel decisions on the PK have all contributed to our horrendous numbers in the regular and the postseason. With a new defence coach coming in, I have optimism that such a stacked roster can stop underperforming on the PK and make it one of our strengths. Special teams win you games, win you series, and win you the Cup. The way that the Capitals manhandled the Vegas Golden Knights on the power play in the Finals makes me feel a tiny bit better about the way we, for the most part, handled the PK. But one cannot deny that there were massive gaps throughout the season, and in the ECF, that teams like Washington were able to expose to great success. If we killed that penalty that Oshie scored on in Game 6 of the ECF, do we win that game and go to the SCF?

We'll never know. But we can definitely improve this part of our game so as to bolster our chances of making it to the Finals next year and winning the Stanley Cup.