I’ve only been mad to the point of tears once in my entire life. In my junior year of high school, I was the only Black captain in a statewide academic bowl tournament (the competition immortalized in the "the limit does not exist" scene in the film Mean Girls). Despite winning MVP of the competition for leading my team to a first-place finish, I had been subject to racist taunts and general surprise at my team’s success that day.

While I tried to ignore these taunts as best I could, a tournament organizer told me right in earshot of my coach that I had gotten lucky in categories like music and sports and that he would make sure there were less "hip hop questions" the next time out. In the moment I was stunned by his blatant stereotyping -- most of the music questions were geared towards classical music anyway. Even now I can remember how much it hurt to feel angry and betrayed by the coach and teammates who were happy to share in my success, but who weren’t willing to support me in that moment as a Black man.

The 2017 horror classic "Get Out" straddles the lines between terror and social commentary and touches on this phenomenon with a level of unerring precision. At one point, the main character, Chris, unravels layers of a villainous plot to harvest his Black body for the use of a white benefactor, and confides his suspicions to his girlfriend, Rose.

As Rose listens to Chris’ plight she simultaneously expresses empathy about Chris’ concerns and makes herself the victim of his supposed paranoia. The genius of director Jordan Peele’s narrative is the focus away from the traditional boogeyman racist in a KKK robe and instead on the specter of the supposedly woke ally who deludes you with hope and terrorizes you with inaction. In the same year that Get Out hit theaters, then Lightning forward J.T. Brown, one of the few Black players in a painfully monochromatic sport, became the first NHL player to publicly bring attention to the plight of police brutality against people of color in the US.

In my article about it at the time, I predicted that Brown would be called out for "bringing politics into sports" and "disrespecting the flag" , which is exactly what occurred not long after. In addition, I noted Brown’s role as a workmanlike but unassuming energy forward, which left him vulnerable to being shut out of the league altogether for taking such a strong stance in a virulently apolitical sport.

In a recent essay for NHL.com looking back on his protest, Brown shared this exact thought saying: "I'm an in-and-out-of-the-lineup guy who has just enough grit to stick around the fourth line. I knew I was replaceable…I knew protesting could make it even harder to get another contract next season. My family and I were prepared for this to end my NHL career. I had decided that I was comfortable with being uncomfortable."

Brown goes into explicit detail about the various traumatic first-hand experiences with racism that informed his decision to protest: "I usually don't talk about when I was at a house party in high school, and some kids from school pulled out a shotgun and aimed it at my head as they were calling me the n-word. People don't like those stories because they reveal truths they choose to ignore."

It was this last sentence that struck a nerve with me. Dozens of white NHL players have stated that in this time of pandemics and social protest, they have taken the time to educate and inform themselves on biases and bigotry against people of color, particularly within their own sport.

I was taken aback not only by the fact that these players were not only unaware of these issues to begin with, but that they never spoke to teammates of color who had open about dealing with issues in their day-to-day interaction. Brown’s wife, Dr. Lexi LaFleur Brown, weighed in on this exact subject on social media, leading to this exchange between the two of us: 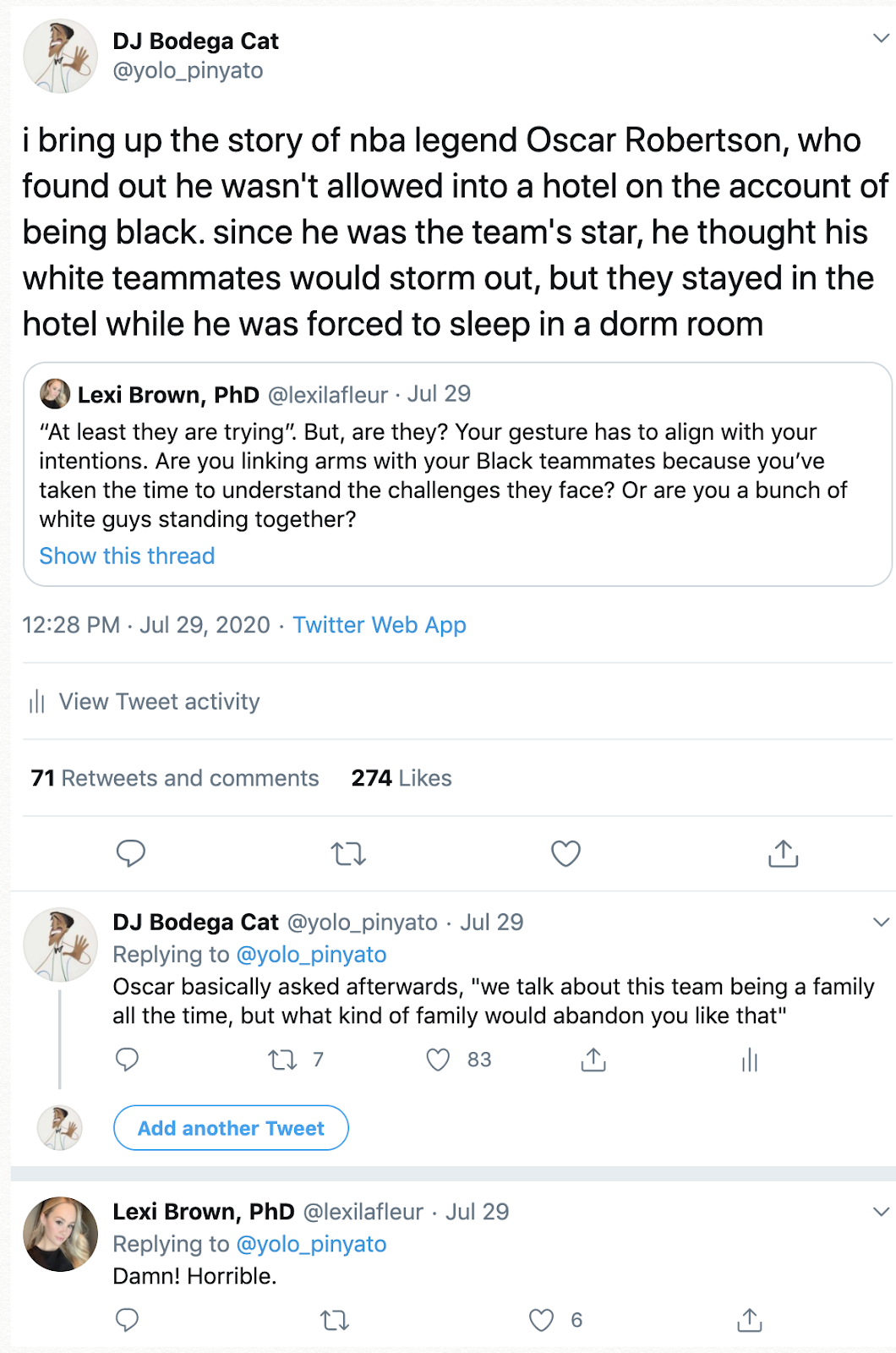 Hockey is an all-consuming sport, especially at the professional level, but to blatantly pretend the difficulties that players of color face both on and off the ice do not exist is negligent at best and malevolent at worst.

Following this outburst of "wokeness" on behalf of the NHL’s white players, the league and the media fell over themselves to praise the players and their newfound sense of social engagement. However, the facade quickly fell apart under further scrutiny. While the league’s players of color coalesced under the umbrella of the newly formed Hockey Diversity Alliance, members of the group expressed frustration about the lack of cooperation with the league on facilitating any long-lasting change. The NHL’s messages of promoting a narrative of Hockey is For Everyone and messages of diversity were undercut by associations with institutions with a history of bigotry and bias.

In response to the criticisms, the league’s VP of Social Impact requested that fans and players hold off on judgment until they saw what the league had planned for Saturday’s relaunch of the season. On its surface the NHL delivered on its promises, with visual images stating that they "Skate for Black Lives", followed by a rousing speech by Wild defensemen Matt Dumba, highlighting the importance of the protests. Following the speech, Dumba became the first NHL player to publicly kneel in support of the Black Lives Matter movement, while flanked by two other players of color in Darnell Nurse and Malcolm Subban. To a PR conscious league, the indelible image proved their diversity efforts had been a success. Nevertheless, more eagle-eyed observers noted that yet again, players of color were left to fend for themselves while white players stood dispassionately to the side. With months of preparation, and education, and an unprecedented opportunity to prove once and for all the league’s commitment to diversity, the league and its white players failed in efforts to share the burden that is disproportionately carried by players of color.

When someone asked Dumba's coach Dale Evason whether or not the team had discussed joining Dumba in his protest, Evason responded with the absolutely disappointing "Nope, there have been no discussions. The only thing we've discussed as a staff is that we want to eliminate racism for good."

A quote from Ryan Reaves highlighted the significant gap between the NHL’s public stances and their actual actions in regard to racial diversity: "For a lot of guys, kneeling isn’t the way they would want to show support," Reaves said. "I know that if I said I wanted everybody to kneel (that) somebody, at least one guy, was going to feel uncomfortable. I didn’t want that. This was the best way to be able to include everybody in it."

However, the fact that it took this long, and the need to craft a protest designed to conform to white comfort, only further illustrates the brave and iconic nature of Brown’s raised fist protest years ago. As writer William Rhoden said in the Undefeated, "The reality is that when power gives players permission to protest, it’s no longer a protest. It’s a pantomime." Brown wanted the permission and support of his teammates and fellow Black players around the league, didn’t get it, and protested anyway for a cause he strongly believed in. That’s true bravery worthy of a retroactive Masterton Trophy.

On the other hand, just like in the movie Get Out, while players of color are crying out for support, the league is furiously fumbling for the keys that they’ve had all along but have no intention of handing over. The league’s white players had to be dragged reluctantly to even make symbolic efforts to support their teammates of color, and therefore the NHL can no longer be given the benefit of the doubt when it comes to diversity.

Does the fact that white players joined Ryan Reaves in kneeling during the anthem indicate a significant leap forward for the NHL? The answer is obviously yes, but only if you're grading on a curve. Remember, this is a league that literally fired a coach just this past season for the vicious racial abuse of a player of color. The league and its players don't get a pass for doing the bare minimum, in the same way you don't give a goalie a standing ovation for saving the 5th shot of the game after giving up goals on the previous four.

When will it change? When will the league's white players, coaches and executives be proactive in pushing for change, instead of just piggybacking on the work of people of color? It seems just like in Get Out, Black players are left to rescue themselves.